Goodness Gracious Me is Leaving the Garage

Goodness Gracious Me practices near Sacramento City College in a tiny garage that barely houses Skyler Henry’s drumset, let alone the rest of the three-piece rock band’s equipment. Cables snake all around the floor and unfinished sheet rock hangs in the balance from the ceiling.

“It’s always kind of a work in progress,” explains Henry.

For this humble Sacramento band, this is all they need—and frankly, all they can afford. They’ve just finished a new record: a 12-song collection of rock ‘n’ roll tunes spiced with hints of Americana, grunge and classic rock. They didn’t have to mortgage their houses to get it done, but they did have to play a pretty steady stream of gigs in order to raise the funds. And even after that, they had to put the album on the shelf for six months before they could do anything with it because the dough dried up. The album, appropriately titled Waiting Room, was recorded at their friend Steve Robinson’s Shooting Range studio literally as it was being built. The surrounding raw materials, akin to their practice garage, must have felt comfortable, because they dialed in an album with all the right textures. With time on their side, it wasn’t hard to be patient and let the tracks develop as they should.

“We had the liberty to actually give it time. You can do live takes and get a lot of honesty out of it, but we wanted to experiment a little bit and take certain liberties to achieve the album,” says singer and guitarist Jeremy Greene.

The band’s genesis began in an audio engineering class where Henry and Greene met for the first time. Greene offered his guitar-playing talents to a recording session during class and Henry took notice.

“We ended up wrapping and going out and getting a couple of drinks afterwards,” remembers Greene. “Our voices paired well together and we decided to take it from there.”

Henry, who was pursuing the guitar at the time, wasn’t looking to play drums in a band. His crossing of paths with Greene changed his tune and he readily agreed to fill the shoes of drummer even though his experience was limited.

“I just kind of told Jeremy that I played drums,” laughs Henry. “I figured I would pick it up as we went along.”

So with Henry finding his way around the kit, and Greene one member stronger than he started out, the two embarked on the tiresome journey of auditioning bass players. After “a trial and fail process,” the two finally stumbled across bassist Sean Arrant on the World Wide Web. They wasted no time and quickly put out a small EP and then a couple months later played a 35-minute set with their new bass player. From there it was solidified—Goodness Gracious Me was whole and ready to move forward.

The boys in GGM have made their Sacramento rounds—they’ve played the Concert in the Park series and gigged with local favorites like Lite Brite, Prieta and Musical Charis. With the completion of the new record comes a new set of goals and new opportunities to pursue, though. First and foremost is getting the record out there.

“I’d just like to get it into as many hands as possible,” says Arrant.

A West Coast tour is also in the works and before that a CD release show at the Blue Lamp with the aforementioned Lite Brite and Musical Charis. Along the way, GGM will be distributing Waiting Room to college radio stations, an audience that the band feels will be very receptive to the sounds they’re creating.

By no means are the boys in GGM done with Sacramento. In fact, the way in which they speak of Sacramento and all the bands that make up the rich music scene is with true fanatical admiration.

“I find myself constantly surprised,” says Henry. “It’s easy to get into that mindset of, ‘I’ve pretty much seen everything there is to see in this town.’ I have to eat those words over and over again. There is some real talent in Sacramento.”

Goodness Gracious Me sits comfortably in the middle of all that talent. The band is most commonly labeled “garage rock,” and the boys themselves even say that their sound is unpolished. “There’s no polish, no glitz and no precision,” according to their band bio.

“The beats started off a little choppy, but we wanted to evolve from there and not get stuck in any specific genre,” says Greene.

That evolution is clear if you’ve ever seen them live, and the time that’s been spent on crafting their sound is even more apparent on their record. Their progress is in part due to their chemistry as a band. They are three levelheaded guys who enjoy making music with each other, accept their faults and are inspired and humbled by others rather than jealous. GGM breaks the status quo; no band beef.

“There’s not a lot of ego dispute,” says Greene. “If there’s something that we actually need to talk about, we’ll squash it in five or 10 minutes. There’s never been any real butting of heads.”

GGM’s sound will continue to evolve and the once unpolished garage band that played that first show three years ago will eventually buff out the blemishes. You’ll still get that grime that you know and love, but with greater focus and louder riffs. Don’t sleep on watching this band go from good to great. 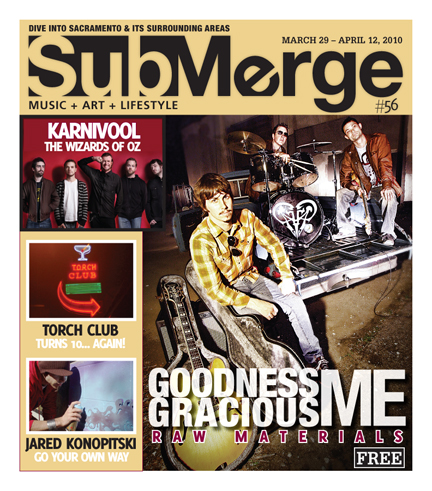 Catch Goodness Gracious Me at their CD release show on April 3 at Blue Lamp. Also performing is Lite Brite and Musical Charis. Show starts at 9 p.m. and is 21+