This is Celebration: Tech N9ne Keeps it Real on the Road to Success 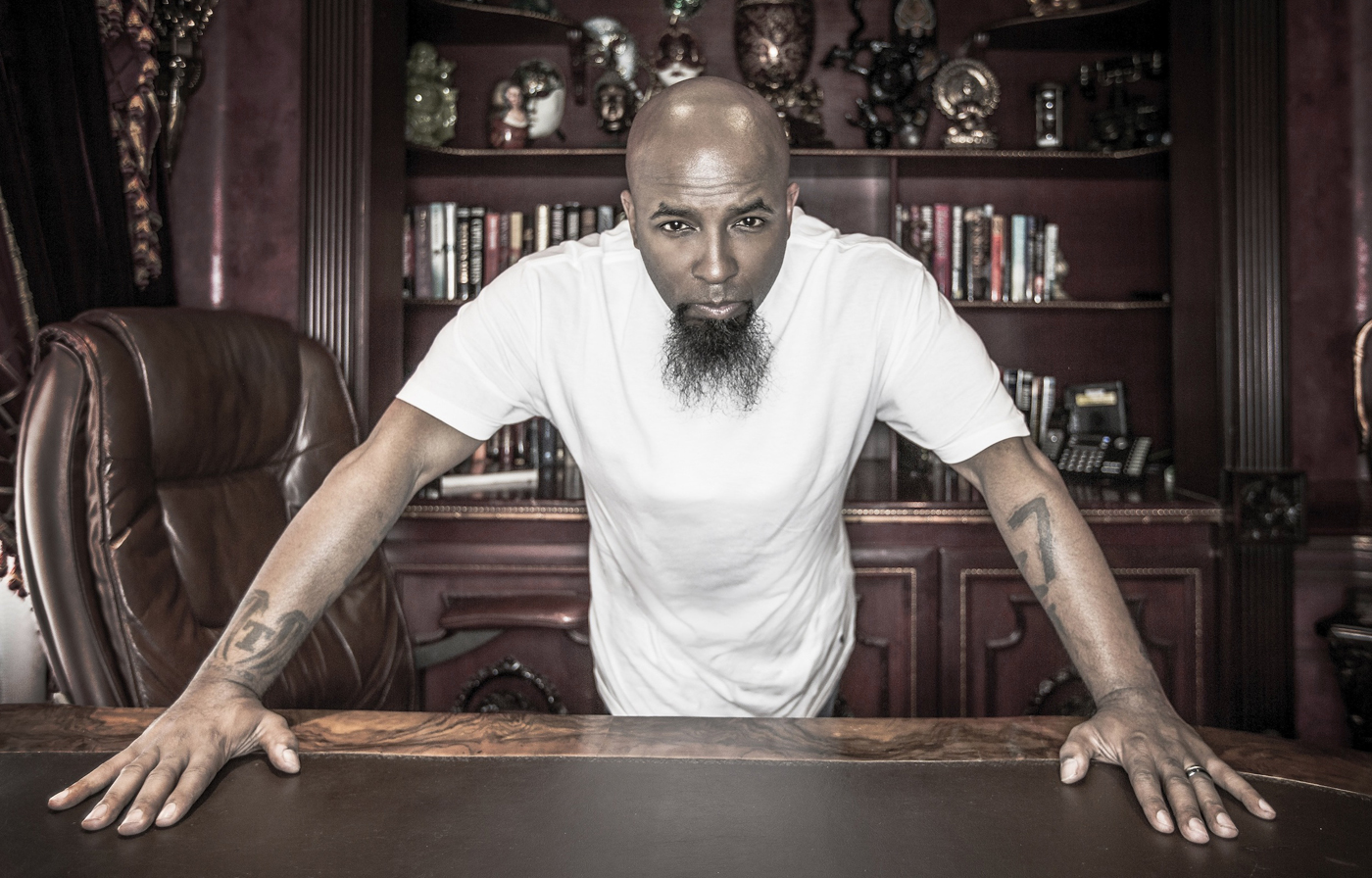 I discovered Tech N9ne in the same way I imagine a lot of suburban kids did in 2006: drinking crappy beer in a friend’s bedroom, laughing while a friend butchered the staccato machine gun chatter and the bombastic call-outs from Tech N9ne’s first certified gold record “Caribou Lou.” “Get the party jumpin’/Keep the hotties humpin’/I like ‘em thick and juicy /So don’t pilate nothing,” my friend would be shouting, sloshing his beer out onto the floor, his eyes far away, envisioning bouncing around on a stage somewhere. And I think that was it. We weren’t drinking Caribou Lou (the rum-based cocktail referenced in the song), we weren’t at a jumping party, there were no hotties humping and we certainly weren’t famous rappers. But with that song shaking the walls and likely annoying the hell out of his parents, it felt like everything in the song was possible. It felt real, tangible, and now, 10 years later, the world is starting to catch onto the reality Tech N9ne has been weaving.

Riding high off the success of the radio-smash party banger “Hood Go Crazy” —a collaboration with Two Chainz and B.o.B—Tech N9ne is yet again embarking on a national tour and will be playing in Sacramento at Ace of Spades on Sept. 27, 2016.

The single can easily be defined as the spiritual successor to “Caribou Lou.” Tech N9ne even drops a shout out to the old “Boulou.” The difference here is that “Hood Go Crazy” has a music video with Lamborghinis, the finger snaps are crystal clear and the production has been buffed to a glossy sheen. Tech N9ne roars on the last verse, “This Kansas City, shit’s ran gritty/In the summer time, the chicks be damn pretty/Born in the projects, then to the ‘Ville /Then I did a deal with Travis and made mills/This is celebration, this is elevation.”

It’s Tech N9ne’s delivery that pulls the verse up from simple rap bravado to a real chest-thumping moment of triumph. While a lot of rappers rap about the money, guns, bling and girls, Tech is rapping about celebration, about sharing his victory so other people can experience it and join in. It comes from a real place and it’s something he acknowledges himself.

“You know, when you’re weird like me to a lot of people, you think that nobody is listening,” Tech N9ne said, speaking by phone from the recording booth in Kansas City. “But then when Lil Wayne says something out of the blue like, ‘I’d like to work with Tech N9ne,’ and I’m like ‘What? Who? He knows me?’ it lets me know that real music always shines man.”

But it’s obvious by now that the Missouri-based rap mogul is not just coasting on weird, off-kilter theatrics to become successful. In 2015, Forbes estimated Tech N9ne’s net worth at $8 million and valued his label Strange Music at $20 million. There are a couple surface reasons for why he’s done that well. Things like he tours endlessly; his fans still buy his merchandise; his painted face image is cool, but deeper than that; there’s this infectious energy and passion that bleeds through his lyrics and into everything he does. In our interview, there were moments where the rapper would break into some of his verses, or simply rhyme his words together like he was a scatting beat poet. It’s an affectation that would come off as grating or disingenuous if Tech N9ne himself wasn’t such a genuine force of energy and good nature.

“I feel like real music is your real life,” Tech N9ne said. “Write what you know and people will forever feel you. What we have in common are our emotions. So if you know how to let loose your emotions in your music then that’s what real music is. Everyone’s reality is different but you’re going to have people who connect with you because we are one human race.”

Even from just skimming Tech N9ne’s big hits, it’s obvious that he raps from a very real place. Even though his radio hits are big club bangers, cruising through the jazzy, bluesy groove of “Fragile,” it’s easy to feel the tension and fire bubbling over toward the borderline incompetent music critics (well, hello there). There are deeper emotions here instead of the same old tropes. “Fragile” went gold and not just because of Kendrick Lamar’s verse (though that certainly didn’t hurt). It went gold because of the production, the delivery and the endless passion streaming off of it.

There are the obvious pitfalls to unleashing these kinds of forces, especially when, as an artist, you are unafraid of delving into the deeper and darker elements of the human experience. Even his stage name itself seems to act as a kind of deterrent against people who are only going to scratch the surface of the art.

“I’m the complete technique of rhyme, I’m Tech N9ne,” he said. “Nine is the number of completion: nine months of pregnancy, cat has nine lives, the whole nine yards; it’s completely everything. But when MTV and BET got what we were trying to do, and we were trying to get our videos on their stations back in the day, they were like, ‘No, your name is a gun, sorry.’”

Which is maybe for the best. People who can’t handle the complex anguish of an artist reeling from the loss of his mother or the dissolution of his marriage might just be better off listening to Drake. There is aggression in the music—violence in his words—but these are means to an end. In the same way that American Psycho’s Patrick Bateman uses violence as a substitute for connection, Tech N9ne uses the symbolism as a pathway to connection, empathy and personal catharsis.

When asked about how Wikipedia has him listed as a “horrorcore” artist, Tech N9ne said, “No no no, it’s like my song called ‘Fear,’ about my mom dying from Lupus. It sounds really creepy. Evil brain, angel heart, it sounds like something horror, but it’s talking about me. It’s me; I’m good and bad. I just sum it up with music is my life, no fiction, you know? No smoke and mirrors, yaddida?

“The darkest song I had on my last album was called ‘Shroud,’ I did with Joseph Bishara. But this darkness is happening because my angel died, my mom. So I’m like, ‘Darkness black as ever like shabba/Thick and oozing like lava/See this room like my Prada, dadda/Must’ve came from my father/Cause my momma was an angel/But this thang grow insane bro.’ Ya’ know? It sounds real mad and dark and horrific, but it’s real.”

His passion and this commitment to writing about the reality of life have brought Tech N9ne huge success and now he’s focused on giving back. He’s currently involved in a project called the “Warrior Built Emcee Contest,” where he put out a song called “PTSD” and left the last verse open. Now, people from all over the United States are sending in their verses and the winner will be flown out to Kansas City to record their verse professionally and do a professional rap video, with all of the proceeds going to the Warrior Built program, a program providing support to war veterans.

“This is how we give back,” Tech N9ne said. “Do this song with me, who’s the hardest? Come to Kansas City let’s record it, let’s shoot a video. It’s about sharing and finding new people I mean, I started my label and it was just me and now I’ve got over 14 artists on it because we’ve steadily tried to help others go forward as well. So why not somebody not even in our circle? Why not do it for the troops as well? People who make it possible to live safely, while we’re over here frolicking while they’re over there fighting. It’s just such a beautiful thing to offer this much to these people because they gave us so much.”

At the end of the day it’s about sharing this human connection however and whichever way you can. If you wanna drink beer and shout about thick women, do that. If you wanna shout down the critics, do that. If you wanna rap faster and better than anyone else in the world, you should give Tech N9ne’s contest a go. Like he says at the end of “B.I.T.C.H,” “Extreme, you know what I’m saying, like fuck what everyone is doing, we’re doing this. Fuck you, you on bullshit. We’re going this way.” Stevie and Tech N9ne have it right, sometimes you just gotta go your own way and don’t Pilate nothing.