Whether by prophecy or design, Placerville’s Pregnant has managed to craft a body of work that lives up to its name. Its songs are open-ended pop symphonies captured in utero, without true beginnings or ends—kicking, stirring, filled with ideas that promise to crystallize at any moment. This isn’t to say at all that the music is incomplete; rather, it’s a living thing, dynamic.

For a good metaphor, picture this: dozens of musical motifs swimming along together, like a school of fish in a stream. Listening to a Pregnant record drops you right in the center. It’s a refreshing and bewildering experience; even if one is disoriented at first, one eventually slips into the current, finding the principle groove that propels the songs forward with a remarkably unconventional pop sensibility. You almost get the feeling that the music keeps changing every time you play it, the brilliant hooks and melodies blooming over multiple listens, as if they’re gestating in your mind.

There is a clear pattern of this growth throughout Pregnant’s discography, up to and including this year’s short-but-sweet LP, Inconvenience. The new work is as much of a headphone trip as ever—awash in sampladelic production, overlapping motifs and reverberant vocals that sit low in the mix—but somehow more assured, contented. Some of that is owed to the smart usage of samples, jazzy saxophone flourishes and piano riffs that hook the listener and provide structure to traverse the various soundscapes; and some of it is brought on by unavoidable changes in the artist’s life.

Between 2004 and the present, lead musician and project mastermind Daniel Trudeau has gone through coming-of-age, expectant fatherhood, divorce and single fatherhood, with countless bursts of professional and artistic development in between. Since last year’s release, Pottery Mills, was recorded in the midst of a breakup, Trudeau has taken up the mantle of artist-on-commission, honing his songwriting chops with an ongoing project he calls Your Song, in which he writes and records personalized tracks for individuals willing to donate at least $5. So far, he’s racked up a whopping 65 tracks, putting Inconvenience almost six albums ahead of Mills in terms of output.

Content-wise, Trudeau has also moved forward. With the help of a fresh lineup, he’s evaluating the things that matter most: family, friendship and the freedom that can only come with self-knowledge. “Lyrically, [Inconvenience] is about knowing who you are by yourself,” says Trudeau. This focus on personal reflection may have paid off in the form of his project’s most realized work to date. As of now, the project is fronted by Trudeau, with additional instrumentation and vocals by hometown buddy Daniel Ramirez and Davis native Molly Raney, who is a talent in her own right as Poppet, an electronic pop artist and one-woman show.

As a live act, the trio become a kind of living sound exhibit, committing all their energy into the array of samplers, drum pads, effects pedals, MIDI-loops and microphones at their disposal. It’s not a rock show, but there’s something quite rewarding in hearing the lush, complex sound of their records reproduced seemingly out of thin air, filling the corners of any living room, stage venue or theater with music that’s as much visual as aural.

I met Trudeau and Raney at a quiet cafe across from The Witch Room, a venue they’ll be filling with sound next week alongside fellow pop explorers TV Girl and Brothertiger. They seem like kind, earnest people who prefer their art complicated and their friendships easygoing. They graciously offered some time to speak about their lives, their art, the boundaries of pop and the business of making their dreams move forward. 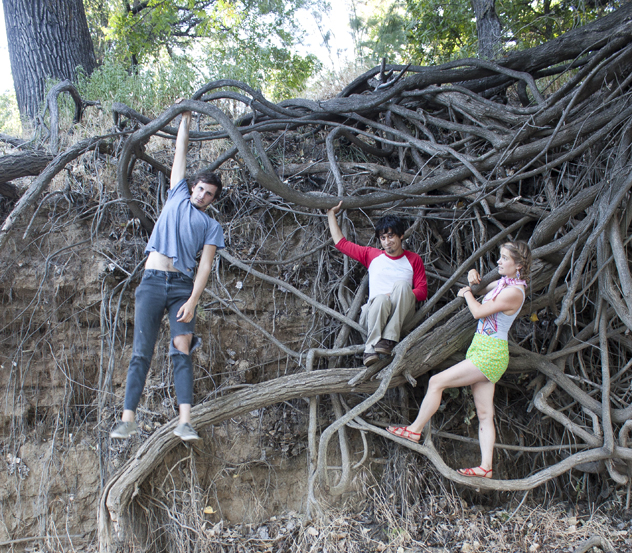 The Pregnant project has now been around 10 years. What was its inception? What ideas or hopes did you have for it at the time? How’d you come up with the name, again?
Daniel Trudeau: It was originally just me, making electronic beats and finding how pleasantly simple it was to make it sound like something other than electronic music. I always wanted it to be a bunch of people collaborating—that’s what it was going to be initially—Pregnant as a project “conceiving” with a bunch of different people. By now, there’s been a revolving cast of other people coming in and helping with it. Some of the members have been more entitled to it, some of them more under my guidance.
Pregnant is the most adequate name for this project. I’m constantly changing and giving birth to new ideas. Of course, I get all the “pregnant” jokes too, like “When are you expecting?”

Since Pregnant has been around for such a huge portion of your life, do you think that it’s come to have a life of its own? Do you think before recording, “What is going to make this a Pregnant album”?
DT: Now I tend to think that Pregnant just means anything put out. Although it does have a distinct sound, I’m trying to keep it changing. Genre-flipping is really important to me, because I hate when things get stagnant and don’t go anywhere.

This one’s for Molly: How long have you been involved with Pregnant?
Molly Raney: Since last November, pretty much. It hasn’t been long, but I’ve known Dan for five years, and I’ve always been a fan of Pregnant. It’s one of the projects that I’m most excited about participating in. I feel like it’s the future of music.
DT: Aww…and since she’s joined it’s been super good, too. She’s bumped it up a notch! As far as live performances go, it’s been so much better.

Could you tell us about the Your Song project? Has that changed your songwriting process?
DT: People donate to Pregnant, about $7 or more, and I’ll write them their own song. It sucks, because it’s not that much money in the long run, but it’s been really good practice with sample-oriented music, and writing lyrics for people I don’t even know sometimes. It’s been fun, and the thing about that project is that it’s not songs about how I’m feeling, it’s songs about other people. So it detaches the ego from the songs, and it’s made it a lot easier to understand how to write songs that don’t have that imposing ego that a lot of songs have when you’re a solo artist. I do a new Your Song every two weeks if I have the time. There’s 65 now, so I’ve spent a lot of time just zoning in on those. It represents what I’m trying to put out there about myself: “Hey! I make music! I’ll be doing this no matter what!” Plus, I’ve made some mad friendships from doing them.

You’ve said before that Inconvenience is about relationships and working through the inconveniences of daily life. How would you explain that?
DT: The album is just about how inconvenient everything is, literally every single thing. It’s hard to live, it’s hard to do anything really, but it’s also a tool for being able to understand yourself, how to rise above the normal things that stress us out in life. I went through a really powerful breakup where I had to figure out who I was, and that’s been the major theme for much of my work lately.

So if we match up the chronology of your work with that of your personal life, when did this major change take place?
DT: Definitely around the last album, Pottery Mills.
MR: That’s like the break-up album, isn’t it?
DT: Yeah, all the last three albums including the new one. Life Hard: I Try was recorded right before my breakup, and it wasn’t just a breakup, it was a breakup with a child, so it’s been a real crazy, “Holy Shit!” scenario. Pottery Mills was all about sinking into depression over that, and I feel like Inconvenience is all about becoming comfortable in life after the fact.

Is there anything about living in the foothills that does something for your music versus, say, living in Sacramento or Oakland or San Francisco?
DT: No. It’s not like I’m making music out in the woods, I’m just in a room for the most part, and the room could be in L.A. just as well as it could be in Placerville. But as far as being more healthy-minded, I like living there, because it’s more eclectic. The people there are more eclectic. I mean, I hang out with everyone from 60-year-olds to 19-year-olds. There’s no age bias. That, and I’ve lived there for a long time. The only thing that would be beneficial to living in the foothills in terms of actual music would be, I guess you feel more entitled to be making music. It’s different than Oakland or San Francisco or L.A., where you’re overrun by art, everywhere.

What fuels you both in terms of influences? Do you put any of them into your work?
MR: Kate Bush is probably my number-one favorite artist. I have a radio show at KDVS that’s actually named after one of her songs, “This Woman’s Work.” It’s mostly solo female artists of all different genres, but a lot of electronic.
DT: So much stuff, man. For samples, I’ve been using a lot of the same stuff for the past year. Cocteau Twins, Prince, classical composers like Stravinsky, Debussy… MF Doom, Moondog, Miles Davis, Fleetwood Mac, anything, really. Anything that’s legitimate, to me. But when it comes to sampling, it doesn’t really have to be legit. If there’s a good drum or bass that I need in a Weird Al Yankovic song, then I have to use it.

We talked a bit about how relationships have been the inspiration for a lot of your albums. Has having a daughter or raising a child changed the way you approach the creative process?
DT: It hasn’t at all, actually. When my daughter was first born, I definitely felt blasted with a big, heavy heart. I made a song for her, that I put out on Regional Music, called “Wiff of Father.”
MR: I did a cover of that one as Poppet. I love that song so much!
DT: She’s a very inspiring little baby, for sure. She’s a toddler at this point, and she’s like a mini-me, with endless funny, weird things to say. She’s definitely made things more light-hearted as far as life goes, but the music has always remained its own thing for the most part. She’s there, and she’s my babe. She might be recording her own album soon.

So what’s going on in terms of the different releases you have out?
DT: Inconvenience is available on Porch Party records, which is a fresh new label out of Long Beach. We have another tape release of the Your Song donations that I mentioned earlier. It’s the first 35 tracks, which will be released on four different tapes. You can pick and choose, or buy all four. Also, all the remixes I’ve done over the last three years have been released on tape by Quantum Wampum records out of Providence, Rhode Island. Finally we have a 12-inch release coming out on Mush Records that I can’t say that much about. It’s been a two-year-long media project that took a long time to create, and will be coming out in fall or winter of this year. That one’s hyper-weird and secret.

Pregnant will be featured alongside Brothertiger and TV Girl on Sunday, July 13, 2014 at The Witch Room. To hear some of their mind-bendingly good pop, you can visit Pregnant.bandcamp.com or check out some of Trudeau’s music on Soundcloud or Spotify. Inconvenience is currently out on Porch Party Records. You can also learn more about Poppet at Poppet.us. 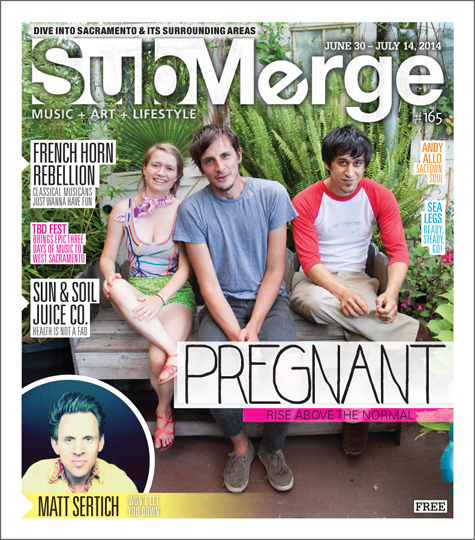