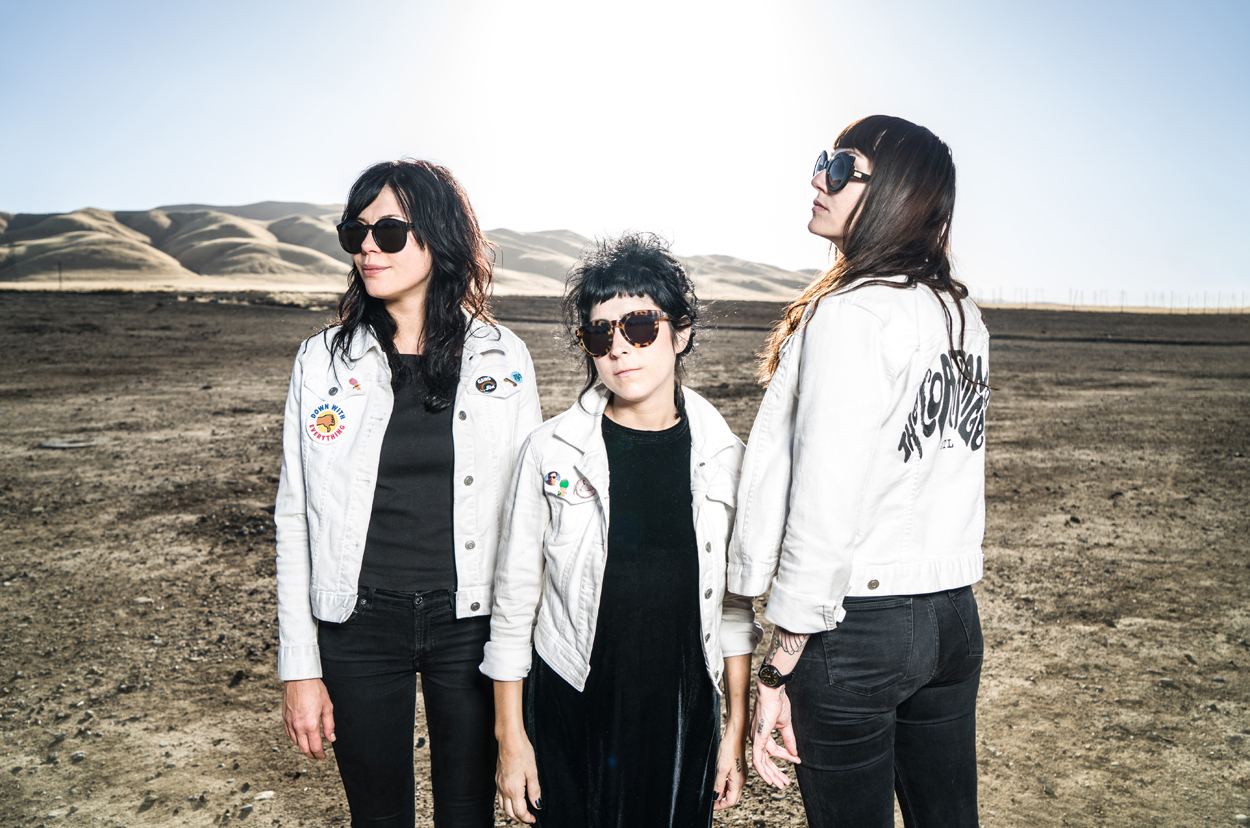 One of the least appreciated offshoots of the American Dream is the prospect that, at any given moment, you can drop out of the humdrum of everyday life, pick up a guitar, bass or drum kit, and take to the roads forever, melting faces from coast to coast with fast, hard rock ‘n’ roll. Countless souls have had the itch, but few have dared to scratch. Julia Kugel (aka Crook Kid Coathanger) Meredith Franco (aka Minnie Coathanger) and Stephanie Luke (aka Rusty Coathanger) are a furious handful of those few.

A decade ago in Atlanta they formed, as a “joke” (self-described), with minimal technical know-how. From the beginning, they were imbued with the punk spirit, howling and bashing their way through every shade of the underground—garage, post-punk, indie-pop, lo-fi—recording a slew of consistently raw but increasingly tight records. The latest of the bunch, Nosebleed Weekend, dropped earlier this year and demonstrates the full crystallization of the group’s sound, with chops, dynamism, and style to spare. Personal band-favorite “Squeeki Tiki” harks back to their unruly beginnings, punctuated by cheeky snarling and a central hook supplied by a dog’s chew toy, while more moody numbers like “Excuse Me” inject a desert-highway mystique into the Coathanger oeuvre. The sound is more polished than ever this time around, a turn of events that owes itself to a combination of new scenery (the band recorded in a legendary L.A. studio unused for decades) and plain, good-old getting better with age. While the band has leaped upward from each album to the next, Nosebleed Weekend sees them hitting an irresistible stride.

These days, you’re more likely to catch The Coathangers at a festival than in a living room. Their nonstop jet-setting has even left Franco with a chronic nosebleed that worked its way into the title and cover of the new album. Still they’ve managed to maintain an endearingly personal touch. Likely inspired by the custom goodie-bags that they handed out at their earliest shows, the first pressings of Nosebleed Weekend came with a care package that showed off the band’s signature cheekiness, complete with a lollipop, surgical mask (autographed), condom, tampon, Band-Aid dispenser and scratch and sniff sticker. By parts sweet, savage, charming and alarming, The Coathangers have managed to snag a unique corner of punk-tinged rock ‘n’ roll that will continue to develop as long as they’re around.

We recently dropped a quick line to Luke to catch up with the past, present and future of the band. 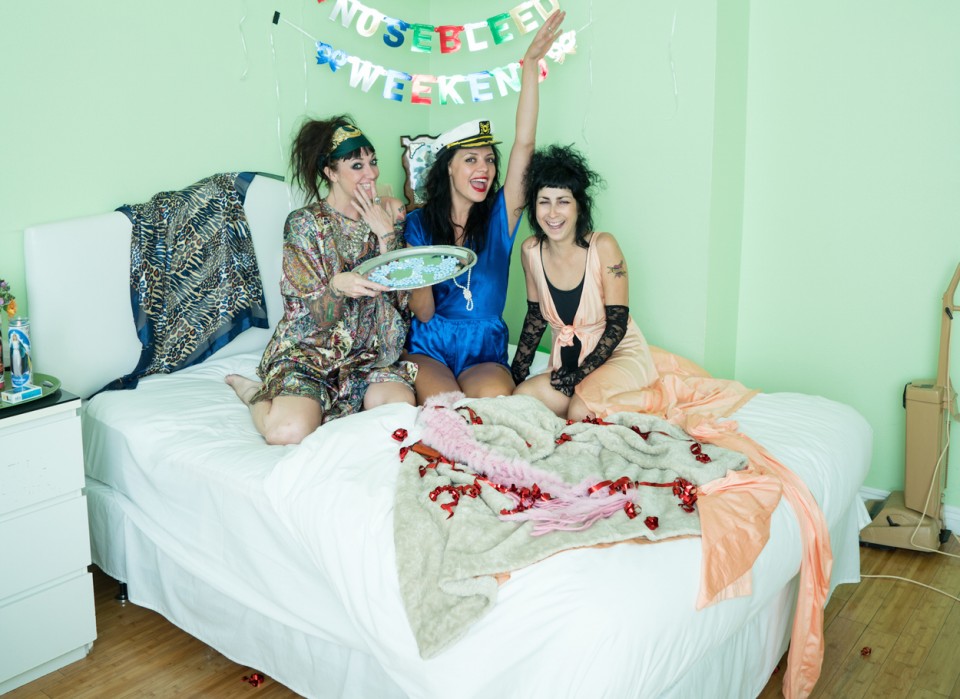 Has there been a change in style from your previous records?
You can just tell that the production value has gone up. The equipment that we got to use was amazing, because we were recording at this place called Valentine Studios, which hadn’t been used since the late ‘70s. But it’s a place that had been there forever. We worked with a producer this time around, Nic Jodoin. I don’t think this record’s too different, though. Usually where the group is at musically reflects where we’re at in our personal lives—maybe it just came out a little more on this album. It’s pretty much the same methods we’ve been using. We just get together and jam it out.

When did you first hear the calling to punk rock in your life?
I’ve always been into it personally, since when I was in high school and middle school. I guess with the other girls it was a little bit later in their lives. I like to think that we’re not just straightforward punk rock. There’s a lot of other elements that we bring to the table besides just being loud and fast. But also, punk rock is like a certain kind of thinking, too, like the spirit of it—not giving a fuck what other people think, sticking to what you believe in, and all that good stuff.

Were there any particular records that made you think “This is what I want to do”?
There are so many records that did that to me. NOFX, Face to Face, Black Flag, anything punk from the year 1977 was a big thing for me. Iggy Pop melted my face, the Ramones … It’s hard to pick just one. Anything fast, loud and hard. We try to take from a lot of that music, a little here, a little there.

What has been the craziest moment of the past 10 years?
Not sure. We just recently played a great show at the Bowery Ballroom [New York City]—that was pretty epic. That was the first time we had huge lines outside the place. We played at Zanzabar [Louisville, Kentucky] last night, and that was wicked awesome because a lot of the audience were singing along to the songs, which is just insane for me to think about.

Is it hard to maintain the same fierce attitude after 10 years?
We’re not as angry necessarily as when we started out. I mean, I was 25 when we started out, now I’m 35. I’m just different as a person, not as angry as a person. Everybody’s still got angst coming from somewhere at some point. Life is a series of up and down events. It’s just something we want to be more aware of. We don’t want to be screaming in peoples faces all of the time. It’s all in how you say it, and I think we just try to say what we have to say in a not so angsty way, but still be strong-minded about it at the same time.

I heard that the band used to bring cookies or other little gift bags to shows when you started out.
It was because we were nervous, and we’d never really played shows before. We wanted to make everything a little bit lighter by bringing the comforts of home to the shows, just to get everybody to chill out, have fun and not take things so seriously.

What’s your personal favorite Coathangers album?
I love them all, but if I had to say, it would definitely be the last one we did because it was such a labor of love. In particular, I love playing “Squeeki Tiki.” That’s usually the closer for every show. It’s fun to play; Julia goes out into the audience with her squeaky toy.

I heard that the squeaker ended up going out on it, and she had a whole audition process for a new one.
Julia spent many hours at Petco trying to find the right one. A coworker of ours, when he found out that someone had stolen it after she had finally found the one with the perfect sound, he went out and bought a box full of them for her. So now we’re all set [laughs].

Any advice for bands just starting out?
Don’t listen to anybody. Just do what you wanna do and keep doing it, and if you love it and enjoy it, just go for it. You’ve got nothing to lose, and people tend to forget that no one starts out as a perfect musician or performer, everybody comes from someplace. If it’s not so great at the beginning, just work hard at it, put your passion into it, put your life into your music and see what happens. Don’t let anyone tell you how to play, or that it sucks, or whatever else, because there’s always going to be haters. Male or female, it doesn’t matter, just go for it.

See The Coathangers live in Sacramento when they play The Colony (3512 Stockton Boulevard) on Aug. 20, 2016. Also performing will be L.A. Witch, Crude Studs and Destroy Boys. For more information on the venue, visit Facebook.com/thecolonysactown. If you’d like a copy of The Coathangers’ latest album, Nosebleed Weekend, check out Thecoathangers.com. 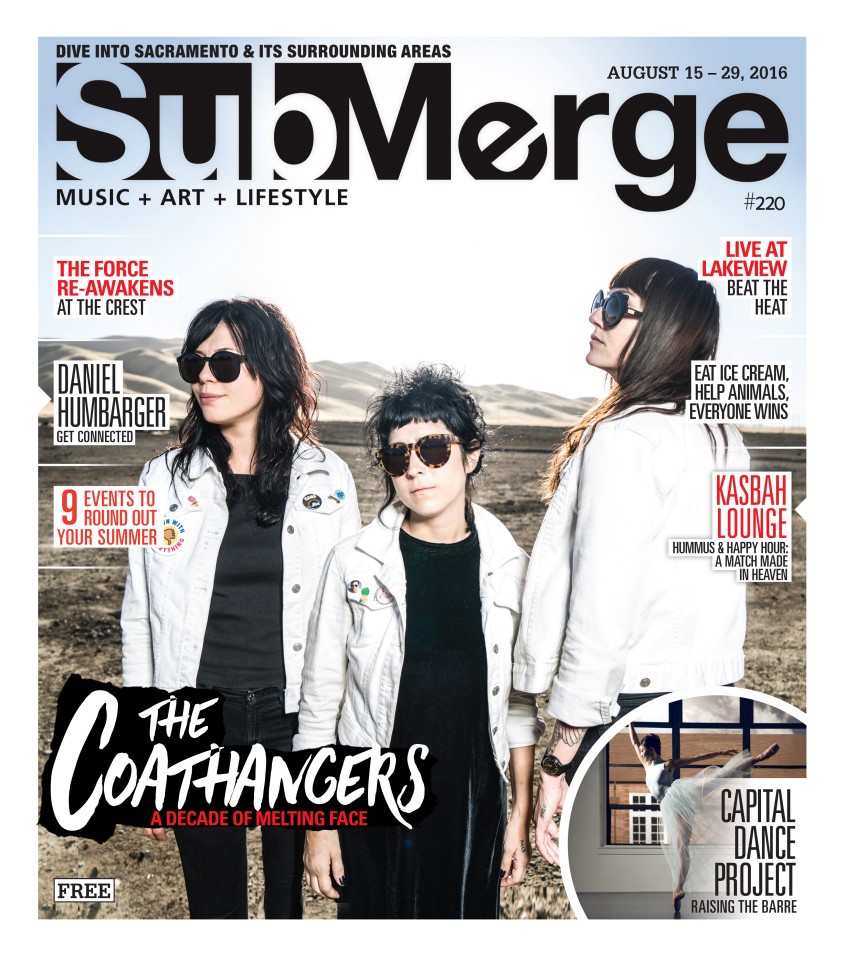