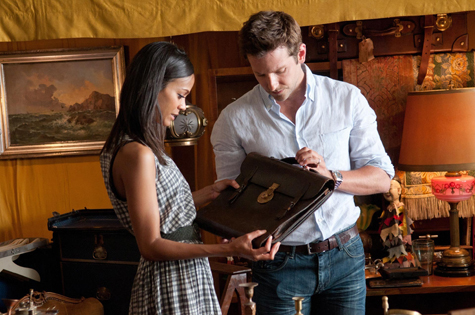 Writing can be a selfish practice. Writing about writing is probably even more so. In The Words, actor-turned-writer/director Brian Klugman and co-writer/director Lee Sternthal, both in their debuts as feature filmmakers, delve deep into what makes a writer tick. It’s a story within a story within a story–sort of the nesting doll equivalent of storytelling. But unlike those placid-faced novelties, The Words bears a much more troubled countenance.

The film opens with writer Clay Hammond (Dennis Quaid) reading from his latest novel, which bears the same name as the movie, in front of a packed auditorium. This could be wishful thinking on the parts of Klugman and Sternthal, perhaps imagining that The Words would be similarly well received by real life audiences. Hammond’s story introduces us to Rory and Dora Jansen (Bradley Cooper and Zoe Saldana, respectively). Rory is a writer, too, and he’s on his way to pick up an award for his first novel, The Window Tears. However, as he and his wife pile into a limo on their way to the reception, there’s an old man (Jeremy Irons) lurking in the rain. 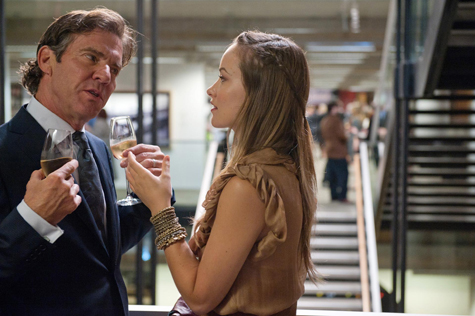 The Window Tears is a critical and commercial smash hit. The big break Rory, a struggling yet not-quite-starving artist, has always dreamed of. Unfortunately, he has a secret. While on vacation in Paris, Rory and Dora find a brief case in an antique store. Once they’re home, Rory discovers that it contains a tattered, old manuscript of a long-lost novel by an anonymous writer that was never published. Rory ends up getting the book published as his own, and the old man, whose name we never learn, reveals himself to Rory as The Window Tears’ author.

Meanwhile in Hammond’s world, he encounters a beautiful graduate student, Daniella (Olivia Wilde), during an intermission between chapters. He’s as taken with her as she is with his writing, but there’s something undeniably mysterious about her and her connection to what’s going on.

Back in the world of Hammond’s novel, the old man recounts to Rory the story behind The Window Tears, which is the kind of sprawling, tragic romance that novels are literally made of, and we are introduced to another set of characters, the old man as a young man (Ben Barnes) and his wife Celia (Nora Arnezeder).

To Klugman’s and Sternthal’s credits, the three layers of the story are clearly defined. The Words never falls into chaos, but the connection between the three couples isn’t drawn in an obvious way. In each case, we have a writer at different stages: the young man, just discovering his talents; Rory at the beginning of his career; and Hammond, middle-aged, confident and established. Irons as the old man, looking worn and grizzled, perhaps serves as the specter of death both in terms of being toward the end of his life, and also in literary terms since after he penned the novel Rory eventually stole, the old man never wrote again.

Though the male characters could be seen as archetypal forms, the female roles feel shallow. Saldana and Arnezeder are strong, painting endearing and sympathetic portraits of supportive wives, but they really don’t have much to work with. Wilde’s Daniella is presented as the most interesting. She’s guileful and captivating, shown off beautifully in expressive and intimate close-ups. But in the end, Daniella comes off written in as little more than a plot device.

Unlike nesting dolls, the storylines contained within The Words don’t fit together very neatly. As Hammonds tells Daniella, the worlds of reality and fiction may get very close to one another, but they never touch. And so, the frayed threads of these three stories are never tied together in a neat bow. However, The Words is still a literate, neatly executed and at times thought-provoking romance worthy of over-intellectualized discussion over coffee after it’s ended. 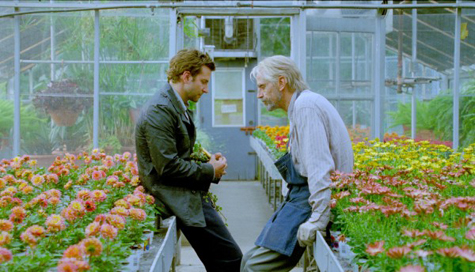