And the Fans Went Wild 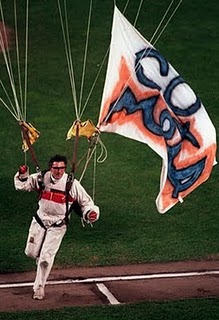 I wasn’t even 10 years old, but I was sure Michael Sergio was the coolest person ever. It was game 6 of the 1986 World Series, and the New York Mets were trailing the Boston Red Sox three games to two. Sergio cut through the October night sky, navigating his way down to Shea Stadium via parachute, wearing a sign proclaiming, “Let’s Go Mets!” Who knew then that a short time later the Mets would conclude an improbable comeback in the bottom of the 10th inning when a ground ball would dribble through Bill Buckner’s legs. Sergio was promptly arrested by New York’s Finest. Two nights later, the Mets would take their second world title. Then-New York Senator Al D’Amato intervened on Sergio’s behalf, and he was released.

No harm, no foul, right? Sergio didn’t kill anyone. He was perhaps guilty of being a bit too overzealous in his love for his baseball team–or maybe he was just jonesing for attention. In any case, fan, as you probably know, is short for fanatic. You can’t expect to pump anxious people full of rah-rah-rahs and not think that someone in the bunch is going to lose their shit from time to time. Organized religion has been proving that for millennia.

Back in the day, fans used to rush out on the field all the time, but no more. Using my Mets as an example (we’ve only won two championships, so you’ll have to forgive me. I need to remind myself of them as often as possible): when the team won their first World Series, some years before I was born, fans rushed the field in droves, tearing up Shea Stadium sod and causing quite a fuss. Nowadays, such expressions of jubilation and devotion are frowned upon. They might even get you Tasered. 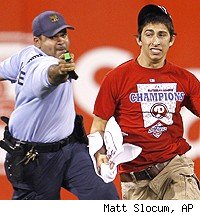 Young Steve Consalvi found that out the hard way. The 17-year-old fan of the Philadelphia Phillies (boo!) was zapped on Monday, May 3, during the eighth inning of a game at Citizen Bank Park in the City of Brotherly Love (as big a misnomer as there ever was). Consalvi had launched himself from the stands and onto the field and ran around like a moron, waving a towel around. Police had such a problem corralling the spry young fellow that one industrious officer thought it best to Tase him. Consalvi collapsed, and officers apprehended the perpetrator to a chorus of boos, though it should be noted that Phillie fans are infamous for once booing Santa.

There are compelling arguments supporting the police’s actions–none of which involve my staunch belief that all Phillie fans need a good Tasering. In the years since Sergio’s flight through Flushing, N.Y., fan/player interactions have escalated from humorous to near murderous. In 2002, two juiced up fans stormed the field and savagely beat Tom Gamboa, a coach for the Kansas City Royals; and tennis star Monica Seles was stabbed by a fan who ran loose on the court. Clearly, players in any sport need concentration to perform their exceptional tasks. Their focus leaves them vulnerable to any rube who had one too many Keystone Ices in the parking lot and a chip on his/her shoulder. Luckily, these incidents are few and far between. 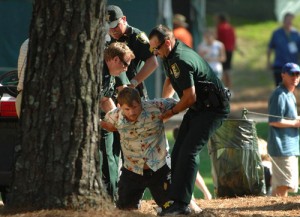 Consalvi can take solace in the fact that he wasn’t alone. On Saturday, May 8 at the Players Championship in Florida, which I’ve read is some sort of golfing match, Travis Parmelee, 36, and presumably old enough to know better, was Tasered for drunkenly heckling Tiger Woods at the 11th hole. He was asked to stop by tournament security, but when he refused, police stepped in, and when Parmelee couldn’t be subdued, he got zapped.

This is all very troubling. Are people of the 21st century really that fucked up that they can’t just shout obscenities at sports stars without having to be frizzle-fried by a stun gun in order to calm down? Has post-9/11 paranoia really got us that much on edge? I find it hard to believe that everyone who trampled the field at Shea Stadium that day in 1969 were kind and well-adjusted individuals. We can’t be more dangerous now than we were then. I’m sorry, but we’re just going to have to toughen up. Not everyone whooping and hollering and carrying on is a threat. Most of them are just harmless fucking assholes.