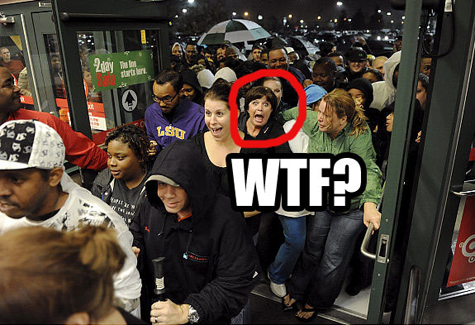 I finally did it. After years of staying away from Black Friday, I finally succumbed. I wanted to get my parents a coffee maker, and the deal was too good to pass up. I didn’t cut my holiday short, though. I didn’t opt out of Thanksgiving dessert–though I probably would have been better off if I had–and I even chatted with guests, lingered on the couch watching football after all the plates were cleared and went to the movies to see The Muppets afterward, but I’m still no better than the rest of the herds who busted the doors, slathering for cheap televisions and other gizmos.

When we arrived near midnight, the big box store seemed almost serene and stoic. Its brick faÃ§ade and bright logo sign implacable against the dark night. I parked as far away as possible, to alleviate the stress of trying to wind through the rows of cars, carts and frazzled shoppers with their wide eyes fixed on nothing but discounts. As we approached the store, we had to march past a group of employees taking in the last free drags from their cigarettes or simply just breathing in the cool night air before the holiday shopping season got off to its frantic beginning. I couldn’t look at them as we passed, but I felt their eyes on me.

“There’s another one,” I could imagine them thinking. “Another fucking asshole pulling me out of my home on a holiday night so he can save $20.” I kept my pace brisk. Still, I couldn’t see the line.

It wasn’t until we’d navigated around half the store that we got to the head of it. Folding chairs lined up, a woman huddled under blankets. I wondered how long they’d been sitting there. It must have been hours–perhaps a good portion of the day. I’d wondered if they even had anything to eat. I assumed–perhaps wrongly–that they were waiting in line so they could buy gifts for others, but if they were there for that reason, where were the people they were so eager to buy gifts for? Shouldn’t they have been together with them instead of sitting in a lonely parking lot with a bunch of strangers?

The line, hidden from much of the parking lot, wrapped around the side of the large store. It was a good five-minute walk before we’d reached the end of it. The people in front of us were huddled in a group. Two women–one a spunky go-getter named Rachel, the other a gorgeous young wife and mother with jet black, pin-straight hair, whose name I didn’t catch, wearing a diamond engagement ring so large that it could have been measured in inches as well as carats–and a third not affiliated with the other two who acted as our guru. She had the circular outlining all the deals. She’d been through this before. I was determined to follow her lead.

Contrary to the reports I’d heard from previous years throughout the country, it was remarkably civil. I’m not sure if I was disappointed or not. I was expecting glowering faces, determined scowls. I was fully prepared to punch a soccer mom (in self-defense, of course) if need be. Luckily, there was no repeat of the horrific trampling death of a Wal-Mart employee that occurred in Valley Stream, N.Y. in 2008. This year, a 61-year-old man shopping in a West Virginia Target became ill and collapsed while shopping. Witnesses reported that people ignored the man and even stepped over him as they went about their business. The Black Friday vet, the gorgeous woman with the ring, Rachel and I had a nice conversation as we waited for the line to move, but I couldn’t help but wonder, what would happen once those doors opened. Would the casual chit-chat we shared outside turn sour once the shit hit the fan? If I collapsed, would they walk over me? Would I do the same to them?

The line, now wrapped around the entirety of the store and with us more or less in the middle, began moving just before midnight. It moved pretty quickly, and within five to 10 minutes, we were inside. We bid farewell to the group of women in front of us and wished them luck as my shopping partner and I made a beeline for housewares. I was determined to just get the coffee maker–one of those single-cup jobs, like the one I’ve fallen in love with at my daytime office. Sure enough, we found it. Since it wasn’t a big-ticket item, the area was pretty clear. I tossed one in the shopping cart figuring I’d head straight for the register and leave this mess behind, but I didn’t.

People carting flatscreens of varying widths congested just about every aisle. The area by the toys was a supreme clusterfuck. Someone rammed me from behind with their shopping cart and I murmured something aweful without even looking to see who or what had hit me. I ended up finding two more gifts and a couple of cheap DVDs for myself. (The Dark Knight for $1.99 was too good to pass up.)

On the way out, we spotted the woman with the ring. She was just as cheerful as she was outside on line. Her arms were full of assorted knickknacks. “I lost Rachel!” she chirped as we parted ways for the final time. I wonder if she ever found her.