Deal with the Devil 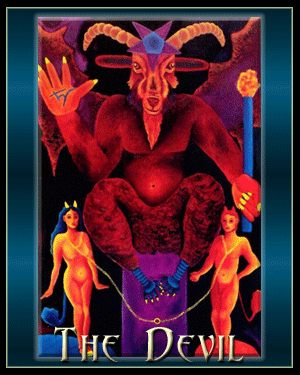 If you read this column at all, you know I’m into metal. So by proxy, that makes me a bit interested in Satan. It’s an interest, but not a full-blown obsession. I’m not going to start conducting sÃƒÂ©ances, fucking with ouija boards or burning black candles on the Sabbath. That could be movie bullshit, but I’d rather not find out for sure. I certainly wouldn’t make a deal with the Devil him/her/itself or one of his/her/its many reputable agents.

Good thing I haven’t, because if I did, it would not only have put my life and my eternal soul in great peril, but it could have also damned my entire nation. That’s what happened in Haiti, you know, according to Pat Robertson.

You see, a while back, many years ago, Haiti made a deal with the Devil. I know! Crazy, right? Well, according to Robertson—who’s a man of God (capital G) and all—it happened.

“They were under the heel of the French”¦and they got together and swore a pact to the devil. They said, ‘We will serve you if you’ll get us free from the French. True story. And so, the devil said, ‘OK, it’s a deal,'” Robertson said on The 700 Club.

It’s unclear whether or not Robertson was quoting the conversation verbatim. Haiti gained its independence in 1804, so Robertson is surely old enough to have been there. But whether he was or not is immaterial. Who wouldn’t want to be free from the French? Being made to eat baguettes and wear berets and pencil thin moustaches all the time would crush the spirit of any people—so much so that they’d have to get supernatural beings involved. You know, when we wanted to be free of the British and not pay them taxes—opting instead to pay ourselves taxes—we fought this big old war against them. Cannons, muskets, drum and flute music—the whole shebang. You know what though? All we had to do was make a deal with the French to conquer our foes. Makes you feel good to be American, doesn’t it? Wait”¦did I say the French?! What have we done?!

So, it’s understandable what the Haitians did, but not forgivable Robertson went on to say the strife the poorest country in the Western World has endured since that time—including the horrific earthquake that left tens of thousands of Haitians dead and caused untold damage—is a result of that fateful day.

Sad, but you’ve got to be careful with whom—or what—you strike deals. Mark McGwire knows that better than anyone. The prodigious slugger came clean recently, admitting he took steroids and human growth hormone in an interview with Bob Costas. McGwire called his ability to hit home-runs a “God-given gift,” and that he never took performance enhancing drugs to hit the ball further, but to help him recover from injuries. Despite repetitive questions from Costas, McGwire never once credited his Herculean acumen for mashing dingers to the chemicals he was ingesting.

His teary-eyed apology seemed sincere. However, I’d probably be crying if I had to spend an hour in a room with a douchebag like Bob Costas. McGwire said he wished he never had to play in that era of baseball—the vilified “steroid era” when records went down like drunk girls on prom night. Did an entire generation of American baseball players make a deal with the devil? I don’t know. Do you feel any tremors?

On a serious note: Whether it was some ancestral pact with Satan or just—you know—what it actually was: the unfortunate consequence of Mother Nature colliding into abject poverty, the Haitian earthquake is a terrible tragedy. The only good to come of it is how people here and across the world are willing to help. Earlier in this issue, our columnist Brad Fuhrman mentioned that texting the word “Haiti” to 90999 will send $10 to the Red Cross. This is a great and easy way to show your support to the victims of this catastrophe.

I would never discourage anyone from doing their part to help out, but there is a caveat. According to an article on WSJ.com, the money you donate via text message may take a while to get to where it needs to go. Depending upon your carrier, that lag time may be as long as 90 days.

Verizon has generously decided to front the money—$3 million—while waiting for those who made donations to pay their cell phone bills. AT&T (my carrier, and yours too if you have an iPhone), however, hasn’t made the same pledge as of our press time. And with what they charge for their service plans, late charges and surcharges, that’s pretty ridiculous. One way to counteract this is to donate directly to the American Red Cross at American.redcross.org