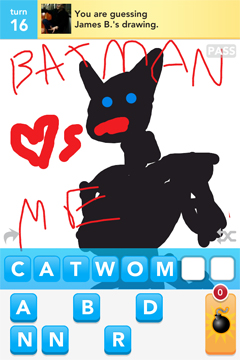 When I was a teenager, I had designs on becoming a famous indie comic book creator. This, of course, was an impossible dream because there is no such thing as a famous indie comic book creator. I would have had a better shot aspiring to be a unicorn (that was my fallback option). I locked myself in my room and drew and drew and drew, because I figured that was the tough part. Anyone could write. In fact, I prove that every other week in this very space. I had a problem with art, though. While I loved drawing all the wicked-awesome characters I had in my head, I had trouble with stuff like tables and doors and just about every other everyday object you’d see. That shit is boring (especially when compared to drawing boobs), but so vital to creating a realistic comic book world. Also, hands are harder to draw than a motherfucker.

So drawing went by the wayside. All that money I spent on Bristol board and gummy erasers and fancy 2H pencils probably would have been better served going toward drugs or more cigarettes or something. Luckily for you, I stuck with writing.

But a couple weeks ago my love for drawing returned. A friend of mine had pointed out a new game she was playing on her iPhone. “Have you played Draw Something?” she asked in the same tone she used to introduced me to Words With Friends and Temple Run; a tone that suggested, “Welcome to what you’ll be doing most of your waking hours for the next five weeks.” Of course, I immediately hit the App Store.

I’m not sure what it is about these iPhone games that is so addictive. About a month ago, I dropped over $150 on Soul Calibur V and Final Fantasy XIII-2 Collector’s Edition (who really collects these fucking things?) and its corresponding BibleÂ­-sized strategy guide to play on my fancypants Xbox 360. The Final Fantasy game has provided almost 70 hours of playtime, but I still don’t obsess over it like I do these ephemeral little game programs that have me hunched over my phone for hours at a time.

Angry Birds was my entry drug, as I think it was for most people, but then I moved on to Robot Unicorn Attack: Metal Edition, which I excelled at while sitting on the toilet. Those were great and all, but it got really bad when I got hooked on Words With Friends. I love me some Scrabble. Also, it’s one of the only things I’m really good at. It’s so rare that I get to show off, but WWF had given me a tool to flaunt my mad skillz to people around the country–while I was riding the bus home from work, or, you know, in the john.

I’m still on the Words With Friends trip, but it’s died down. Most of the people I know–my own sister in particular–refuse to play with me. I thought about letting her win, but really, that wouldn’t be doing her any good. No one likes to be patronized. Now I’m down to just a paltry four or five games, one of which is a deathmatch with my column brother Bocephus Chigger.

But Draw Something is an entirely different animal. It’s more about teamwork as opposed to racking up triples against your opponent. It’s like digital Pictionary, where you and a friend try to guess a word based on a picture you drew. It’s fun, and ridiculously addictive. Plus, you can accumulate coins to buy new colors!!! How cool is that?!

As it turns out, my years away from drawing in any serious capacity have left me quite rusty. Also, my thumbs are not nearly as nimble tools as a well sharpened pencil and a Rapidograph pen. I strain to move my ponderous digits over the iPhone’s smooth and frustratingly small screen; I scrawl semi-decipherable hieroglyphic clues that may pass as characters from our alphabet. It’s not pretty, but it gets the job done.

Originally, I set aside one slot of Draw Something time right before bedtime. This was easy when I had a manageable amount of games. But once I posted one of my masterpieces to Facebook, my number of games grew exponentially. I’m currently running 16 games with friends far and wide–a couple of whom I only vaguely remember. It may not seem like a lot, but this is ART. It takes time. Now if only I could get my thumbs to draw a decent pair of boobs.