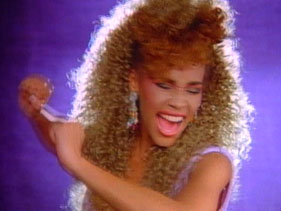 I remember going into a mom and pop electronics store (those used to exist) with my parents. I must have been in the fifth grade. There was a room full of giant televisions with state of the art audio and visual equipment. This was the ‘80s, mind you, so the shit was huge. Big screen televisions were like monoliths of glass and plastic. Surround sound wasn’t ubiquitous–maybe it wasn’t even really invented yet–but the stereo systems were equal in size, boasting racks upon racks of cassette decks, graphic equalizers and turntables. Speakers encased in cabinets stood large, loud but stoic.

The store had cable, though, which was something I’d never seen before. One of the televisions was playing MTV, and back then the M actually stood for music. As fate would have it I was not only watching my first music video, but also experiencing my first crush.

The video for Whitney Houston’s “I Wanna Dance with Somebody” was playing on the tube, and I couldn’t take my eyes off it as my parents were off in the corner of the cluttered shop, being courted by a salesman. In the video, Whitney had a big voice, titanic hair and a variety of brightly colored outfits. In that respect, she was like one of the Muppets, who I also loved, but this felt totally different. I figured that Whitney and I would meet one day, and we would be married, because that was the extent of my knowledge of male-female romantic relationships up until that point. Sadly, all these years later, my knowledge of such things is only slightly more extensive.

We left the store without buying anything. My parents used to love to go shopping, but buying things was another matter entirely. It didn’t matter, though, because I had clearly undergone a transformative experience. We continued on our way to an aunt and uncle’s house, who also had cable, and as luck would have it, “I Wanna Dance with Somebody” came on during our stay. Someone commented that they liked the song, but I kept quiet. Our love was a secret until, well, right now actually.

Whitney moved on, clearly, and so did I. Around the same time, I met Jennifer Connelly in Labyrinth and forgot all about the pop star. I’m sorry. Love’s a fickle thing sometimes. Houston, of course, married Bobby Brown, which turned out to be a tumultuous affair. I never hooked up with Jennifer, but you know, there’s still time. I figure it’s probably because she hasn’t met me yet. (Call me.)

My window with Whitney has closed, however. As you most likely know, the 48-year-old mega pop star was found dead in her room at the Beverly Hills Hilton on Saturday, Feb. 11, 2012. Cause of death wasn’t known as of this writing, but I’m sure until the toxicology reports are made public, people will speculate that drugs were somehow involved. People are right to, I guess. Given her history and battle with addiction, drugs most likely played some role, even if indirectly.

It’s a sad story, like most every death is. Houston’s story is as clichÃ©d a fall from grace tale as any celebrity cautionary tale. What’s worst with Houston, though, is that before her struggles with drugs came to light, she seemed so poised. She wasn’t a Charlie Sheen figure using her shadowy life off stage to sell records. She’s the one who nailed the “Star Spangled Banner” at the Super Bowl–the year my New York Giants beat the Buffalo Bills in a thrilling game as the United States was engaged at war with Iraq (the first time around).

I found out over Facebook, which is the only way anyone ever hears about who’s dead, who’s in jail and who’s getting married anymore. Within minutes, my feed exploded with snarky remarks, heartfelt memorials and simple surprise. Oddly enough, the news brought me back to that day in the electronics store–something I hadn’t thought about probably since the day it happened. I’m sad for her daughter and for her fans, but personally I felt a shudder of mortality. It wasn’t at all pleasant.

The night of her death I found myself at a bar, and the DJ played “I Wanna Dance With Somebody.” A gaggle of drunk young women, who may or may not have been born when the song was first released, howled and raised their Styrofoam cups. They began to dance, huddled in a circle, hugging intermittently. At another table, someone stood on her chair and raised a lighter. “Put ‘em up for Whitney Houston,” the DJ enthused. I couldn’t tell if he was being ironic or not, but I put up my glass all the same.