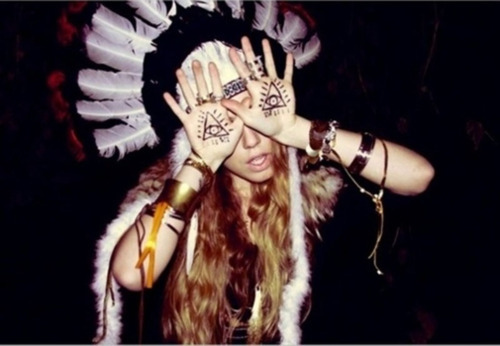 Fashion trends escape me. To be honest, a lot of things escape me, but fashion trends are at the top of the list. What the cool kids are wearing so far this millennium really boggles my mind. It’s not that they don’t look good, it’s just with all the great junk food out there, I don’t know how they can cram themselves into those jeans.

But it’s more than that. I’m so far out of the loop (there’s a loop, right?), I don’t even know what’s a “thing” anymore. Like, I just found out that wearing Native American headdresses to outdoor music festivals is or was a thing. I’m too old to actually go to an outdoor music festival—all that standing in the sun and drinking and loud noises and physical contact with strangers would probably kill me—so the only reason I know this is because I read an article about it on the Internet (which also escapes me, but that’s for another column).

According to the article I read on Dazeddigital.com, the trend of wearing headdresses and other Native American-style garments has “become depressingly popular with festival goers over the past decade.” This statement really bothered me…has it really been a decade since I’ve been to an outdoor music festival? It’s weird when you’re able to break up your life into decades. I think it’s time someone Old Yeller-ed me.

Anyway, if you’re one of those people (and I’m not judging…yet), don’t even think of bringing your fancy headdress to this year’s Bass Coast Festival in Merritt, British Columbia (that’s in Canada). The festival, which is “an eclectic offering of emerging electronic music, art, ideas and technology,” according to its website, takes place Aug. 1 through 4, 2014 on “indigenous land.” In advance of the festival’s opening, Bass Coast put forth a press release, which stated that promoters will instate an on-site, security-enforced ban of “feathered war bonnets, or anything resembling them.”

Bass Coast’s decision was made after consultation with aboriginal peoples of British Columbia, in order to respect their dignity.

“We understand why people are attracted to war bonnets,” the press release says. “They have a magnificent aesthetic. But their spiritual, cultural and aesthetic significance cannot be separated.”

At first I thought, this is great. Good for them. They’re fed up with poseurs appropriating a culture they know little or nothing about and are not going to stand for it at their music festival. The article on Dazeddigital.com, as well as one on the same subject at Brooklynvegan.com, praised Bass Coast’s decision and hoped that more festivals would follow suit—and they should.

All was right in the world. But then that part of me that likes to see the other side of the argument was all, Hold up…I mean, this is a music and art festival, right? Isn’t it supposed to be all about expression and multiculturalism? Would it be safe to presume that the people who attend these sorts of events are open-minded and sympathetic to the plights of indigenous peoples as well as those of any group that has been marginalized and/or oppressed by mainstream society? Is that dude drinking a koozie-cloaked can of PBR wearing a feathered headdress to mock Native American culture or because he thinks it’s awesome and he wants to feel a part of something? What right does a music and art festival have to tell me what I can or can’t wear to their shindig?

“At the end of the day, if someone is wearing something because they find it aesthetically pleasing and enjoy how it makes them feel, we don’t have a right to intervene,” one person commented on the Dazeddigitial.com article. “This article makes the judgmental claim that the people [at] these shows are just a bunch of kids on drugs who have nothing better to do than misappropriate symbols of First Nations’ culture, but I think there’s more to it than that.”

So it’s OK, then? Maybe not. I did some rummaging around and found another article from way back in 2011 on Nativeappropriations.com entitled “But Why Can’t I Wear a Hipster Headdress?” which laid out in pretty absolute terms that even if you’re cool, you’re not that cool, bro.

“‘Playing Indian’ has a long history in the United States, all the way back to those original tea partiers in Boston, and in no way is it better than minstral [sic] shows or dressing up in blackface,” the article states. “You are pretending to be a race that you are not, and are drawing upon stereotypes to do so… You’re collapsing distinct cultures, and in doing so, you’re asserting your power over them.”

You just got served, right? Like I said, I can see both sides, though I think Bass Coast is doing the right thing. We didn’t have problems like this back in my day. We all wore flannel, even in the summer, and the only people we offended were lumberjacks, but they cut down trees, so… Huh? What was I saying? Just get off my lawn, hipsters.