God-a Get Your Gun

With seemingly a new mass shooting every month or so, guns have become a very hot topic. Everyone has an opinion on guns ranging from they’re the cause of all evil to it’s our God-given right to own a whole garage full of them. I’m probably one of 10 Americans to have never fired or even held a gun. I don’t really have a desire to, either. I mean, if you want to, that’s great. Just don’t try to get me to drink beers with you and drive out to a shooting range—because I won’t—and point it the fuck away from me. I’m not sure if that makes me a namby-pamby liberal or not, but I do have to say that it seems as if making tighter gun restrictions is unfortunately pointless. They’re everywhere. In most cases, they’re easier to get than a pack of cigarettes (and it’s definitely easier to find a place to start popping caps in things than it is to find some place you can light up a Camel). You can buy guns in department stores and through catalogs, and now if you’re really hard up for finding something to shoot things with, you can just go to church.

Well, not all churches, just one in particular. Pastor John Koletas of the Grace Baptist Church in Troy, N.Y., has decided it would be a good idea to raffle off a gun in the house of the Lord. On March 23, 2014, the good pastor will give one lucky member of his flock a shiny new, legally modified AR-15 assault rifle.

I don’t play Call of Duty online, so I had to look up what an AR-15 assault rifle is. According to the opening line of the AR-15’s Wikipedia entry says the rifle “is a lightweight, 5.56 mm/.223-caliber, magazine-fed, air cooled rifle with a rotating-lock bolt, actuated by direct impingement gas operation or long/short stroke piston operation.” (Feel free to insert any sexual innuendo you’d like here.) I haven’t the slightest clue what any of that really means, but the entry includes a picture of this thing, and it looks like something you’d find a jacked-up juicehead toting around in a Predator movie. 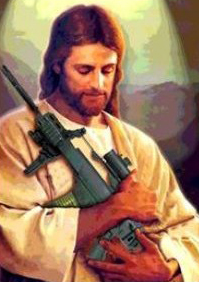 Koletas said giving away a rifle is in-step with the teachings of the Bible, which he said is “replete with defending yourself and arming yourself and being capable of defending yourself,” according to an article on CBS6albany.com. Sure, you could say that there weren’t any weapons on par with an AR-15 when the Bible was written, but I guess if Jesus was packing serious heat like this, the whole crucifixion scene may have gone down quite differently.

But not only is it the Christian thing to do, Koletas was quoted in the same article that it was his patriotic duty to start doling out firearms.

“I sort of feel obligated to be a blessing and a help to gun owners and hunters who have been viciously attacked these last few years. It’s their Second Amendment right.”

Well, I guess he does have a point. I used to go to “feasts,” which were kind of the most fun you could have as an Italian-American child growing up in a predominantly catholic neighborhood in New York. Churches would run them and there’d be rides and zeppoles and carnival games outside, and inside the church’s basement there’d be games of chance where you could win money, like roulette and this game with a ball that a barker would bounce and you’d bet on which colored cup it would land in. Even though I was just a kid in elementary school, I was never shooed away from playing along with the adults. I’d ask my mother, “Isn’t this gambling? Isn’t gambling wrong?” and she’d say, “Well, it’s OK, because we’re in a church.”

But winning a few bucks because the ball landed on blue doesn’t seem to equate, as Mr. McLaughlin would have us believe, with winning an assault rifle. With the money I’d won from church gambling, I’d just buy a slice of pizza or a greasy bag of zeppoles. I’m not sure what I could do with an assault rifle other than assault things.

To be fair, they’re not giving away the actual AR-15 at the church. The lucky winner will receive a voucher to pick up the rifle at a local gun shop, and he or she will have to be an “eligible adult” and go through all the proper background checks. So that’s good, right? And let’s face it, the rifle will eventually find itself in a good Christian home, in the hands of a God-fearing, church-going, upstanding citizen. And no religious person has ever committed a senseless act of violence that has resulted in the deaths of innocent people before…