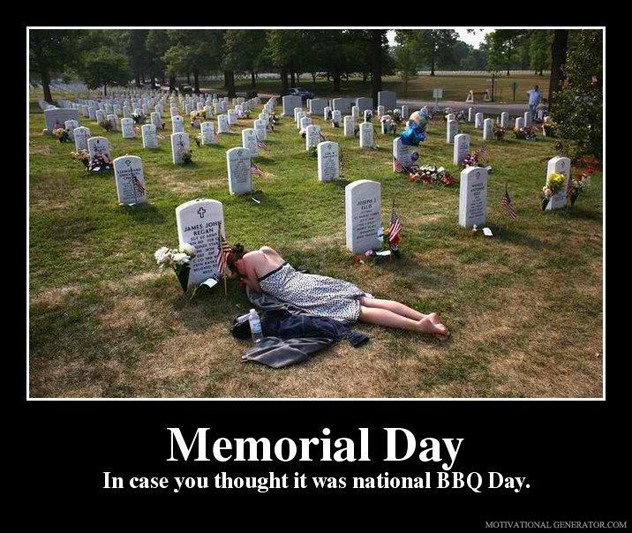 Memorial Day has come and gone, which means, unofficially, it’s summer. I love these long, carefree days—not that they’ve been truly carefree for quite some time. Not since I was in grade school or whatever, and summer meant I had two and a half months to fuck off. Still, summer feels carefree. Even if it really isn’t.

I still get really excited about Memorial Day weekend, though. It’s like that first weekend you can really let loose and go wild. Growing up on the East Coast, it was like the first time you could safely ditch your jacket and go out in short sleeves. It was probably the first time you could fire up the barbecue—unlike California where you can pretty much do that shit all year round (no matter what you guys seem to think).

Of course, we have this three-day weekend thanks to the service of our brave men and women in the military. Like many of you, I’ve had friends and family members who’ve made the sacrifice and served this country—through peacetime and war—and it’s wonderful that we dedicate a day to thank them. Sure, I usually spend Memorial Day weekend bombed out of my mind and eating a terminal amount of grilled meat products, but I guess that’s just how I show my gratitude.

I smiled as I saw my Facebook feed light up with people excited about where they were going to go or what they were going to do this past weekend, even though it was a working one here at Submerge. Maybe you made the trip up to the Sasquatch Music Festival, or piled in a car and drove down to somewhere on the coast. Maybe you just stayed home alone and ate your body weight in burgers. No matter what you did, I hope you enjoyed yourself. I know everyone has things they need to do, but they often forget that enjoying themselves is just as important—if not more so.

Still, if someone’s having a good time, there are people out there who want you to be miserable. That’s just the way it is. Maybe it’s because they’re assholes, or maybe they think they’re just being helpful, but they just love to be a bunch of fucking killjoys.

In addition to the wealth of holiday plans I saw dash across my Facebook feed, there were also plenty of posts admonishing those having a good time for supposedly not remembering what Memorial Day is all about, namely those who gave their lives in service of our country.

One meme that crossed my path was a photo of a woman lying facedown on the grave of a fallen soldier. Her face was in her palms. Clearly, the person who’d died was someone she held very dear. It’s definitely a photo that just the sight of will tug at many people’s heartstrings. It tugged at mine, but I’m a fucking sap.

The image speaks for itself, but someone thought it necessary to add a caption. “Memorial Day,” it said in big letters, followed by “In case you thought it was National BBQ Day,” as if it was the punch line of a joke.

I wish to God or Whoever that there was a National Barbecue Day, but I’m sure people would feel the need to pontificate about why we should feel guilty about enjoying that too, somehow. Like how people get pissy about Thanksgiving, because some link it to the stealing of America from American Indians, or how others get their panties in a bunch because we get a day off for Martin Luther King, Jr. Day, because they’re fucking idiot racists.

Whatever, dude. It’s a holiday, let’s just enjoy it. I know why we have Memorial Day. I know there are people out there who have made sacrifices that I could never dream of making. They gave their youth, and maybe even their lives, maybe not for me personally, but for an idea that they wanted to keep our country safe. That’s a really noble thing. It’s so noble that it’s difficult for me to fathom it.

I do give thanks to those who have served in the armed forces. I know that when I’m drinking beers or eating hotdogs that there are people out there who have died so I can do it, but if it’s true that they died protecting our freedom (and I think it is), then I guess people are free to party like they just don’t care on Memorial Day weekend. They’re free to hook up with people they’ll never speak to again in shore towns and lakeside cities all over the country. They’re also free to post things on Facebook that make me feel so guilty, I feel the need to write a column about it.