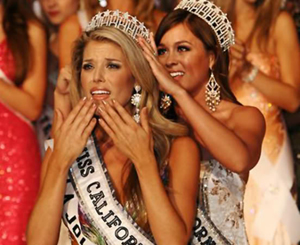 Oh, Carrie. It seems that our dethroned Miss California is determined to keep stoking the fires of her bullshit celebrity status since she spoke out against same-sex marriage during this year’s Miss U.S.A. Pageant.

I should say right off the bat that I support same-sex marriages. We are all equal under the law, and denying any section of our population the right to reap the benefits that should be open to everyone is harshly discriminatory. And I’ll leave it at that, because you don’t need me preaching at you. That being said, I also support Prejean’s right to say whatever she wants, no matter if I disagree with her or how much of a hateful dickweed her opinions make her out to be.

What’s really bothering me about this Prejean saga is that she wrote a book—and it even got published. Still Standing was released on Nov. 9, 2009. If you haven’t read it already, here’s a description from the inside flap, “Carrie Prejean had no idea, when she walked down the stage to face her final question before the selection and crowning of Miss U.S.A., that her hopes, dreams and reputation were about to come crashing down around her under a torrent of media attacks.”

It would seem that religious right types are as quick to play the victim as they are to blame one. Whatever happened to that headstrong, pulling yourself up by your bootstraps mentality?

“Carrie Prejean endured the hellish nightmare that the liberal media can inflict on anyone who disagrees with their agenda, but her faith, courage, and conviction have made her a role model for how we can stare down the bullies of political correctness and reclaim our God-given rights to freedom of speech, thought, and conscience.”

Ah”¦there it is. The inside flap goes on to say that the book will show readers, “Why liberals target conservative women for special persecution,” and, “How political correctness is becoming a clear and present danger to free speech.”

Well, the last part does have some truth to it, even though I can be nauseatingly PC at times. Maybe Prejean and I don’t disagree on everything, but that doesn’t mean I don’t think she’s a dumbfuck, bigoted fame whore—albeit one I’d love seeing naked and performing sexual acts.

Of course there’s a sex tape, because everyone who’s needed to extend their 15 minutes has one. On the Nov. 12 episode of The View, she confessed that before she was a goodly Christian, she did in fact get freaky on camera. However, she neglected to mention that she’d made seven more, as well. Radar Online discovered that Prejean had made eight sex tapes and also had been featured nude in 30 photos.

“On one tape Carrie is wearing just a flowing white blouse as she touches her own body in an alluring manner,” Radar Online reported.Ã‚Â “Carrie can be heard moaning on a few of the tapes.” Radar Online then quoted a passage from Still Standing, which goes, “God gave us our bodies, and it’s perfectly right that we use them in ways where we can give glory to God by making our bodies, our temples of the Holy Spirit, strong and fast.” Hallelujah indeed!

Suffice it to say, when I read this I realized I need to get my sweaty pervert hands on at least one copy. As in most cases, my friends at Vivid Entertainment are looking out for my best interests. Apparently, they’re working feverishly to get at least one of the sex tapes to the public. God bless them. According to Sawfnews.com, Vivid believes that they may actually get Prejean to sign off on the tape so that it can be released, though the report seems skeptical that could happen. Also, there’s the slight problem that the ex-Miss California may have only been 17 when the tape was made. Talk about shattered hopes and dreams!

Well, I guess I might have to soldier on, with courage, though with one less thing to jerk off in the shower to. I supposed after this new flurry of attention, Prejean will stand tall and walk off into relative obscurity, which is probably where she belongs anyway.