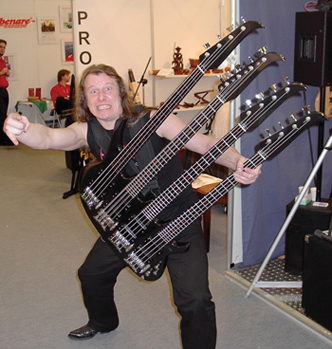 As you may already be aware, I love music. To say that my tastes are eclectic would be putting it mildly. I grew up in the ‘80s as the youngest of four kids who all loved music and played it around the house, so I was exposed to many different genres at a young age. I always enjoyed the variety of sounds I heard and I wanted to know how the music was made.

My introduction into the art of music-making came when I was around 10 years old. My brother and I shared a bedroom at the time, and one day he brought home a bass guitar. I think he paid $40 for the bass and it looked like it. The body was cherry red and had two long pointy bits at opposite ends, making it very ‘80s metal, but also extremely unbalanced and awkward to play. I did, however, see Rick James play a white version of the same bass on an episode of The A-Team once; so, it did have that going for it.

In that small shared bedroom, I’d watch my brother play that ugly bass all the time and would often sneak in and play it too after he left. Later on, he got a guitar and the same thing happened again. I never really figured out what I was doing before he moved out with his guitar and bass, but the seed was planted.

I begged my parents for a guitar for my next birthday, and they reluctantly agreed. It was the first instrument I could call my own and it wouldn’t be the last. That guitar was soon replaced by a better version, and that ugly red bass of my brother’s was eventually passed down to me as well. I now had the instruments that had inspired me to play in the first place, but it wasn’t enough.

I progressed cautiously at first. I was in college and money was more than tight. It was tough to drink beer, smoke blunts, eat super burritos and buy music equipment while living on student loans. That meant my birthday and Christmas presents usually came in the form of Guitar Center gift cards. Those combined with what little money I could scrape together from working, rapping and a few generous donations allowed me to put together my first home studio.

It wasn’t much, but that little studio got me by for a while. After college, I got a job making decent money and went ahead and blew most of it on gear again because I was convinced that it was time for an upgrade. I needed more accurate monitors to mix my tracks with and a new computer to handle digital multi-track recording. My non-existent music career depended on it! Besides, I loved my toys and didn’t see the harm in my little hobby at the time.

I’ve since acquired a lot of equipment in my quest for the perfect home recording studio. As my collection has grown, I’ve been forced to move from the corner of my tiny college bedroom to the entire dining room of my current house to contain my studio. Despite space restrictions, I still pore over the music gear catalogs that come in the mail each month and dream of things I couldn’t possibly fit in my studio. I’ve read thousands of blog comments and user reviews about musical instruments and have watched more gear demo videos on YouTube than should be allowed. It’s nearly a daily thing. In fact, I did it to procrastinate before I began writing this.

I am fortunate enough to have found people that can live with and even support my addiction. My family still provides the aforementioned gift cards and is great at pretending to love pictures of my purchases while allowing me to play the role of proud papa. My brother still plays guitar and bass and is my biggest supporter/enabler. He too is a gear junkie, and we have conversations about equipment that are indecipherable to most other people.

My girlfriend, who is the prime observer of my constant Internet research and YouTube fuckery, couldn’t possibly want to hit me over the head with one of my guitars. She has never more than chuckled at the hyperlinked studio gear wish list I have saved on my computer. She doesn’t even seem bothered that our dining room was converted into a music studio or that it’s starting to fill up with equipment; at least that’s what she tells me. At some point, I’m sure there will be an intervention, but I guess I’m not quite there yet.