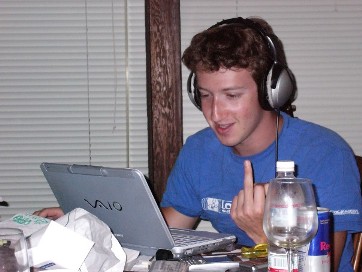 On Friday, May 18, 2012 Facebook–you know, the website–became a publicly traded company. I have about as little interest in the stock market as most people who are interested in the stock market probably have in my column, but as with most people who are obsessed with the media, the Facebook IPO (which means initial public offering, as I have now found out) was big news.

That rat-prick bastard and founder, CEO and majority shareholder of Facebook Mark Zuckerberg, rang the opening bell as his company’s stock opened at $38 on the NASDAQ. At the ceremony he stated in that croakingly annoying voice of his that Facebook going public was a huge milestone for the company, but it wasn’t the ultimate goal for the Menlo Park, Calif.-based media giant.

“Our mission isn’t to be a public company,” the 28-year-old fucking billionaire said to the crowd. “Our mission is to make the world more open and connected.” Well, la-di-da.

After a half-hour delay in the trading (presumably as NASDAQ officials posted, liked and shared statuses commemorating the event), the mad dash began to gobble up pieces of the world’s largest social network, which now boasts nearly a billion users. The price of the stock quickly rose 10 percent, but then as people realized they were clamoring to buy shares in a company that essentially produces absolutely nothing and provides a service of questionable value, the price dropped. Facebook closed up a mild 23 cents after its first day of trading.

Pundits and commenters were quick to chime in on Facebook’s lackluster showing. In a video posted by the Associated Press, Brian Hamilton, CEO of Sageworks, a financial information company, pointed to that little shit Zuckerberg, who is sole majority shareholder wielding a lot of power in the company, as a possible culprit.

“You’re making a big bet in one individual,” said Hamilton, who also brought into question the belief that Facebook’s user base is infinite. The video also ruminated over the debate of just how the social networking platform could actually “monetize its users” (i.e. us).

This is what sort of rubs me the wrong way. It’s not that I’m jealous of that fucking weasel-y, hoodie-wearing prick Zuckerberg for having an awesome Aaron Sorkin-written movie about his life or for attaining an almost god-like level of success–a level that not even in my wildest, delusions of grandeur could I ever have the scope or breadth of imagination to dream up for myself–at such a young age. Seven years younger than me to be exact. I’m not jealous. I’M NOT. What bothers me (really I’m not) is that what Zuckerberg and now all these fuckwits on Wall Street are making money off of is me, and not just me but all of you too.

Now, this isn’t like another product. Coca-Cola makes its money off of us too. It provides us with a soft drink that we fork over money for. That’s fine. They get profits, we get diabetes. Maybe that’s not the best example, but you see what I’m saying. But considering what we share on Facebook on an everyday basis, it’s really us that they’re selling.

Our lives are online now. Where we’re going; who we’re there with; pictures of our kids; comments from our mother; wishes for a happy birthday; who we’re in a relationship with, how we just became single and why it’s complicated now; how you feel about that asshole who just cut you off in traffic. It’s all on there. When pundits and commenters are using nebulous terms like “user base,” what they really mean is all of you, if you’re on Facebook. I’m guessing you probably are.

So what do we get out of this? It’s too early to tell, really. Maybe with the influx of investor capital, the site will see some exciting new improvements. Maybe the app for iPhone will finally work like it’s goddamn supposed to (I’m not holding my breath), but that’s all best-case scenario stuff. Now that it’s a publicly traded company, all those people with their hands in the pot are going to want to see returns on their investment. They’re going to see us (I’m sorry, the user base) as dollars and cents. What exactly are we worth? Am I making any sense? In any case, I’m sure whatever happens, we won’t see a penny from it. No one will give us a nickel for sharing our lives so openly so others can profit. Zuckerberg won’t have us over for a barbecue at his mansion, to thank us for making him so exorbitantly rich, that obnoxious, nerdy bitch. I mean, I’m not jealous, I’m just saying.