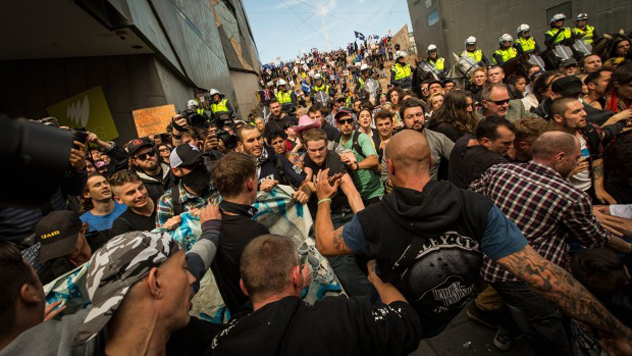 Racism. As it turns out, it’s not just an American thing.

Jokes. I swear, I love America.

I think you should love the country you live in, even if you don’t agree with everything that goes on in it. It’s true, I may like living in another country more if I moved there, but I’ve never really left the United States. I went to Canada twice for a couple of days, and it was really cool (and cold), but even though everyone I encountered was really friendly and obeyed all traffic and crosswalk signs, I didn’t have any real desire to move there.

Every country has its issues, no matter how awesome it seems. Like, Australia seems like the best place on Earth. I’ve never been, but it just looks amazing. They have awesome animals like those frilled lizards that run all funny; kangaroos, whom Mother Nature blessed with their own natural pockets; and koala bears that just sit up in trees and get high on eucalyptus leaves all day. They also have James Barone. No, not me, but some guy who has the same name as me, who friended me on Facebook years ago. James Barone seems like a great guy. He’s handsome and has a beautiful wife. I think he owns a bar or something. Everytime he posts pictures of himself and his super cool friends, I like them. I always post on his wall for his birthday. I’m just happy he puts my name’s best foot forward (he’s doing a lot better job of it than I am).

But Australia also has things that aren’t awesome, like big-ass poisonous spiders and racism. Let’s focus on the latter.

This weekend in various cities across Australia, anti-racism groups clashed against members of the Reclaim Australia movement, who have grown out of fears over the “spread of Islam” in Australia.

For their part, Reclaim Australia organizers claim that they are not racist. They’re just exercising their right to free speech, they say, and I guess since Islam is a religion and not a race, that they aren’t actually racist.

“Both my parents are immigrants. They both came from the former Yugoslav Republic, how can I be a racist? I’m a first-gen Aussie,” one Reclaim Australia rallier George Jameson was quoted as saying by Nzherald.co.nz. “I’m [here] for freedom of speech and democracy and respecting individualism, respecting someone’s dignity and their human rights.”

There are a lot of holes in Jameson’s logic. First, it sounds like he’s assuming that children of immigrants can’t be racist, or maybe he’s saying that citizens of the former Yugoslav Republic are incapable of racist thoughts. I don’t have scientific evidence to back me up on this one, but I’m going to imagine that either assumption has to be false.

As for the second part of his statement, I’m assuming he’s concerned about radical Islam, which like many extremist religious sects has problems with things like women (see just about every monotheistic religion ever). And hey, anyone who’s ever seen ISIS or Al-Qaeda rhetoric knows that radical Islam is a scary thing, but I’m not sure if Australia is in any danger of becoming overrun by Muslim extremists. According to a 2011 census posted on the Australian Bureau of Statistics’ website (Abs.gov.au), only 2.2 percent of Aussies identified as Muslim, which ranked them below Buddhists (2.5 percent) of the country’s most prominent religions (and miles behind Christians at a whopping 61.1 percent). It’s difficult to “reclaim” a nation when you’ve already pretty much got a monopoly on it.

It’s interesting to point out that Mr. Jameson (not to be confused with my favorite whiskey) decided to wear Greek soldier attire to the Reclaim Australia rally. According to Nzherald.co.nz, he was sporting “a replica Spartan military outfit.” Like, OK, bro, if you’re going to profess your hokey nationalistic beliefs at a not-technically-racist-but-still-pretty-racist rally, shouldn’t you at least dress Australian? Like Yahoo Serious, or Crocodile Dundee or something? Jokes! God, I was kidding! How about Mel Gibson? He’s not … Oh wait …

But what do I know? The only reason I left the country twice was to take advantage of a lower legal drinking age. Now that I’m safely over 21, I really never have to leave America again. I wonder what Australian James Barone thinks about all this. I might have to ask him on Facebook.