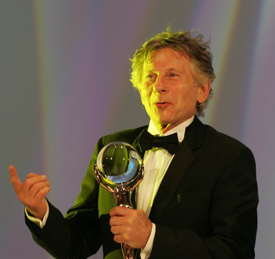 Who would’ve thought moral mongering right-wingers, democrats and hard line feminists could ever agree on something? Right now, these three disparate sections of the American populace are firmly walking hand in uneasy hand in their disgust over those in Hollywood who have come to the defense of visionary director Roman Polanski. Throughout his career, Polanski has reached iconic status with films like Chinatown, Rosemary’s Baby and The Pianist, which won him an Oscar in 2003. His personal story is even more compelling than his professional one: He is a survivor of the Nazi concentration camps; his actress wife Sharon Tate was brutally murdered by the Manson Family; in 1977, he raped a 13-year-old girl. If you couldn’t guess, or didn’t already know, it’s that last bit that’s gotten people all worked up. Again.

Over 30 years ago, Polanski began taking pictures of a young girl named Samantha Geimer, who was an aspiring actress. During a photo session, according to Geimer, Polanski plied her with champagne and Quaaludes, and when the drugs began to take hold, had sex with her despite her pleadings for him to stop. Polanski maintained his innocence in the matter and cooperated with authorities, but eventually plead to a lesser charge of unlawful sex with a minor. However, when his deal with the court seemed to go sour, he fled the United States and has been living on the lam ever since. That is until he arrived in Zurich, Switzerland, on Saturday, Sept. 26. Polanski was due to receive recognition for his life’s work at the Zurich Film Festival, but was instead taken into custody on his outstanding 1978 U.S. arrest warrant.

In the meantime, people have been taking sides. Many in the Hollywood and international film communities have come forward to rally around Polanski and demand his release. On The View, Whoopi Goldberg went as far as to say that what Polanski had done wasn’t “rape-rape”—whatever the fuck that means. Of course, all the outpouring of liberal support for the controversial director gave something else for right wing pundits to blather inanely about. But this time around, they’re sentiments were echoed in the cries of some of their most ardent foes. In her column for Salon, feminist writer Kate Harding bluntly wrote, “Roman Polanski raped a child. Let’s just start right there, because that’s the detail that tends to get neglected,” in reaction to those who defended Polanski’s actions on the grounds that he is a great artist and should be free to create.

Geimer on the other hand, now in her 40s and with her own family, has said that she has long ago forgave Polanski and doesn’t wish him to serve any more jail time or suffer any further hardship from the incident. And I would imagine that she’s not all too pleased about being forced to relive that fateful day. To be fair, Polanski was never before, nor has he ever been since, accused of such a crime.

Like Harding said, though, he did rape a child. And then he escaped prosecution for it. Neither of these actions paints the picture of a savory individual. Why have many in Hollywood been so quick to come to his defense? Do they wish to rape tweens with impunity? It doesn’t make much sense. In an article for Guardian.co.uk, writer Paul Harris points out that the same people who are defending Polanski were the first to throw Mel Gibson under a bus when he made anti-Semitic remarks when pulled over for drunk driving. Supreme douchebaggery, yes, but Gibson didn’t rape anyone, and though he may not have Polanski’s rÃƒÂ©sumÃƒÂ©, Braveheart and Mad Max, were both really good films. Is it because Gibson is a racist right-wing nutjob and Polanski is an artiste that he gets a free pass on this? It would seem that there is a bit of a double standard at work here. Some of my favorite directors (The Coen Brothers and Wes Anderson) have signed on as Polanski supporters. I understand why: he is a great director, but in this case, I’ll have to respectfully disagree with them. I think the art and the artist are two separate entities. It’s possible to celebrate one while looking critically at the other.

My favorite Polanski film is The Ninth Gate. I realize it’s not considered one of his greats, but I’m a sucker for demonology. It tells the story of Dean Corso (Johnny Depp), a rare book dealer who is trying to track down an unusual work of the occult that may or may not have been written by the Devil. Along the way, a beautiful and seductive woman who could be an angel or a demon helps Corso along his journey. She guides him down the dark path toward the essence of evil—a road that Polanski seems all too familiar with.