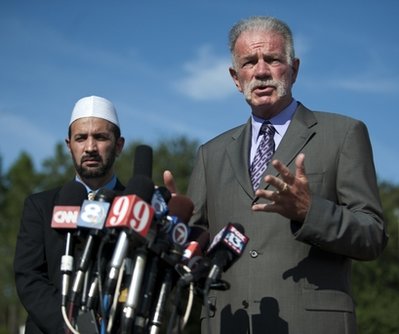 Does anyone else like theater? I know, it can be pretty silly–a bunch of people in too much makeup playing make believe or singing and dancing and causing a fuss. But you know, like anything else art-related, when it’s good, it’s impossible to deny its charms. Luckily, we hardly have to shell out the money we don’t have to see theater in action; we only have to turn on the news.

Pastor Terry Jones is no doubt a fan of theater, too (as long as there aren’t any gays involved, I guess). The Gainesville, Fla., fringe preacher announced recently that he was going to turn up the heat on a national day of remembrance and burn a Quran on 9/11. Hey. Why not? Somewhere in a cave in Pakistan–fitted with Wi-Fi, of course–dudes in al Qaeda were probably stoked. It’s like they don’t even have to try to get the world’s Muslim population pissed off at the Great Satan American anymore. All their work pretty much gets done for them. All they have to do is post a few grainy beheadings on YouTube to keep up appearances and call it a day.

Jones really upped the ante, though. He dubbed 9/11 “International Burn a Quran Day.” Day! Might as well make a day of it. Take the kids to the park, pack a picnic, burn a Quran, toast marshmallows. He was doing this to protest the proposed building of the “Ground Zero Mosque,” which isn’t a mosque nor is it at Ground Zero, and I’m just about sick to death of hearing about the fucking thing. Since arbitrary titles that have no basis in fact have become so prevalent, I’m just going to call it “Herman” and move on.

So Jones, and a peculiar majority of Americans, think Herman is an insensitive, gloating jerk and should move to another part of New York where I guess he could still gloat but at a greater distance. Jones wants to cause an even greater stink about it and burn some religious books. Fine, really, have at it. Burn a Quran, a Bible, a Torah… Burn an American, Canadian or Mexican flag. Put on a white hood, tattoo a swastika on your face and goosestep naked down Broadway during rush hour. It’s all protected under the First Amendment. The rest of us should just shrug, roll our eyes and say to our other educated friends, “Can you believe this asshole?” and have a good laugh about it. Of course, it’s never that easy.

As Jason Limpkin put it in his wonderfully scathing article for Huffington Post, Jones was elevated in short order to icon status. “The story of how one lone idiot, pimping an 18th-century brand of community terrorism, held the media hostage and forced some of this nation’s most powerful people to their knees to fitfully beg an end to his wackdoodlery is an extraordinary one,” he wrote.

Jones ended up calling off the Quran burning. He said that he had been contacted by Feisal Abudul Rauf, the imam in charge of Herman, through a local Floridian imam. Jones said Rauf had decided to move Herman to another location if it would stop International Burn a Quran Day. Jones added that he was heading to New York on Friday, Sept. 10 to meet with Rauf. As it turns out, this may all be a lie as both Rauf and the Floridian imam, Mohammad Musri, both deny ever contacting Jones or setting up a meeting and stated that Herman is staying put.

Confused? Me too. I don’t know what’s happening here, or why I’m supposed to care. I don’t know shit about the Quran. I’ve never read it. Maybe there are four chapters in there about how to succeed as a suicide bomber. Even if there are, what the fuck is the difference? I read The Great Gatsby. It’s still one of my favorite books! I think about it all the time, but I never became a rich New York socialite.

Still, while it may be easy to dismiss Jones and his followers as crazy people (they are), there’s no denying they have power. And I’m not sure they’re as marginalized as us thinking folk would like to believe. President Obama had to get on national television and plead with people to stop hating people because they’re different.

I’m growing weary of these stories. It’s no longer a question of whether or not people really believe shit like this. They do, a lot of them do, perhaps even a large majority. It’s past the point of it being a question, “Are we this stupid?” The answer’s clear. We are. If you’re reading this, and you think I’m wrong because you work at some hipster coffee shop and everyone you speak to every day is stoked on the new Arcade Fire album and adheres to a vegan diet and gives a fuck about their carbon footprints and is so tolerant of other races and religions, you’re in the minority. In a democracy–and this country still is one the last time I checked–the majority rules. And you probably don’t even vote, but you can bet an iced soy milk mocha latte every member of the Tea Party does.

When I was a kid, I was obsessed with the Book of Revelation. I still think it’s a wonderful work of psychedelic fiction–poetic, beautiful, frightening and yes, wildly spiritual. I used to have a perverse fantasy that I would live long enough to see this actually happen–that the trumpets would sound and plagues of locusts would swarm, the sun would grow as black as sackcloth, and the Great Whore of Babylon would descend from the sky; that the Four Horsemen would unleash their wrath upon the Earth; that the Messiah and the hosts of angels would stand against the Antichrist in an epic battle that would empty all the souls in Heaven (talk about theater!). Now I’m starting to hope it actually does.