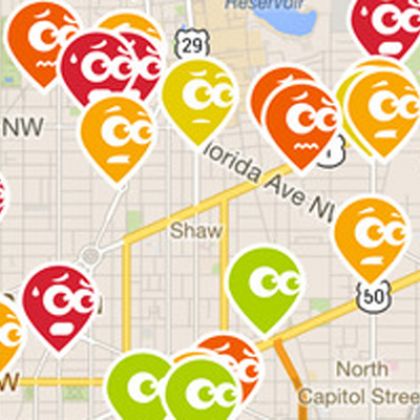 Gentrification has become all the rage in cities all across the country. I love words like “gentrification” because they’re so heavily coded, but we all know what they really mean without having to say it. Like, if I just threw out the term “urban streetwear,” you’d know what I meant… I mean, come on, you know, right?

We can probably all think of what neighborhoods used to be “bad,” whatever that means, but are now littered with cute shops and places to buy darling cupcakes and/or get an overpriced but just so delicious cup of coffee (and the “barista” is so hot!). However, I was always interested in the changeover. Like, who were those first few pioneering “young urban professionals” who bravely marched into a tract of city squalor and saw an unpolished gem—a diamond in the societal rough?

Let’s say, for example, you and your boo hopped on your bikes in search of a new apartment. Now that “everyone” has found out about your current neighborhood, your landlord wants to raise your rent, and you simply can’t afford it because your boutique vinyl- and cassette-only record label continues to return meager profits. You’re on the hunt for the next Hipsterburg, U.S.A., get lost near the freeway and happen upon a few blocks of “undiscovered” paradise. OK, so you’re not sure if you’d eat at those restaurants (do they even have “gluten-free” options?) and the apartments look like they could use a thorough fumigating, but the place has good bones. There’s only one problem: the current inhabitants look kind of stab-y. I mean, just because they’re…you know…poor…does that mean they’re dangerous? IF ONLY THERE WAS SOME WAY TO KNOW HOW SKETCHY THIS AREA IS BEFORE WE TAKE ADVANTAGE OF ITS CHEAP RENTS AND PRICE THE CURRENT RESIDENTS OUT OF THEIR HOMES.

As the saying goes, there’s an app for that. Welcome SketchFactor, a smartphone app that crowd-sources its users to determine which neighborhoods are “sketchy.” 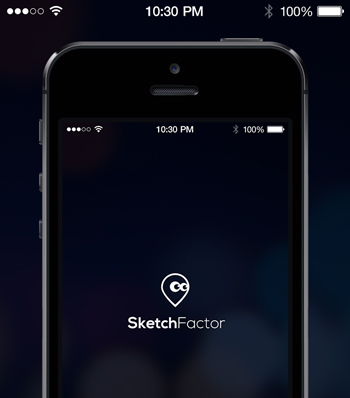 Maybe I’m being a bit harsh, but the founders of SketchFactor—New York City residents Allison McGuire and Daniel Herrington—have become used to being on the hit list in recent weeks. The duo—who are on the lighter shade of pale as far as their skin color goes—have come under fire for creating a racist app, whether or not that was their intention. The homepage of Sketchfactor.com features a letter addressing the controversy their fledgling app has raised, insisting they’ve created something that “is a tool for anyone, anywhere, at any time.”

“We’re disappointed that certain publications have taken a super silly picture and done so much to slam us without actually talking to us,” the letter goes on to say. “People are entitled to their opinions. That’s legit. But slamming SketchFactor without having a conversation is unprofessional.”

The homepage also includes a link to a YouTube video dubbed “SketchFactor Teaser” that features creepy music and a “diverse” group of testers messing around with the app and trying to be funny (I think), though it doesn’t really show what it does or how it works or really anything of real value. The app’s logo, an inverted teardrop-shaped blog with shifty eyes, also kind of bugs me out.

“The whole premise of this app is we let everyone define sketchy on their own,” Herrington said in an interview with New York Daily News.

I guess that makes sense. I mean, what is “sketchy?” It’s another one of those coded terms, but what’s sketchy to one person may not be for another. A side of a building heavily tagged with graffiti could be artsy for one and an eyesore to another. If you’ve ever waded through a bunch of self-absorbed pissy Yelp reviews when trying to decide if you want to check out a new restaurant, you’re probably familiar with the old adage that opinions are like assholes and they all stink. (You probably also know that it’s likely not a coincidence that the name “Yelp” is strikingly similar to the sound a small, annoying dog makes.)

The app and the people who created it may or may not be racist, but critics of SketchFactor fear that it could be used as a tool for amateur racial profilers. As Emma Cueto pointed out in her article on Bustle.com, “Obviously, all people have a right to be, and to feel, safe wherever they are. But it’s also an inescapable truth that white people have a tendency to find people of color sketchy—after all, a sizable number (up to 46 percent in some instances) are willing to come out and blatantly say they support police using racial profiling.”

The “46 percent” statistic she’s referring to is from a 2004 Gallup poll on racial profiling, in which 46 percent of non-Hispanic whites admitted they believed the practice was justified at security checkpoints in airports (though it found less support among whites in other situations).

So do I think SketchFactor is racist? No. It’s an app. Apps aren’t racist. They’re software. They don’t have feelings or opinions. People, on the other hand, are an entirely different matter.