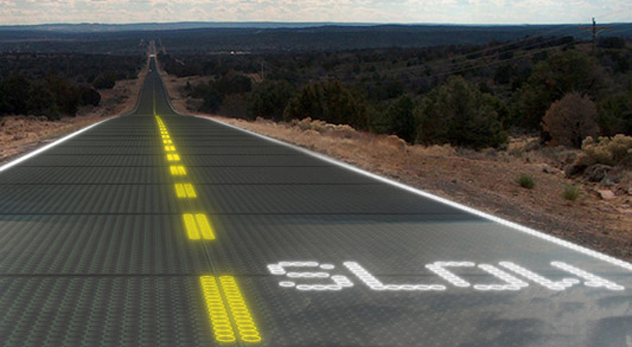 Amidst all the posts admonishing me for enjoying myself on Memorial Day when so many of our brave men and women in the military have sacrificed so much, and the many arguments back and forth over why yet another senseless shooting tragedy meant we should or shouldn’t do something about guns (we should), something eerily positive showed up in my Facebook feed: a YouTube video called “Solar FREAKIN’ Roadways.”

I watched it because inserting the word “Freakin’” into any phrase makes me chortle and giggle like a 10-year-old who just heard someone fart. I thought it must be some kind of joke, at first, like that video I saw that claimed the hover-board (as seen in Back to the Future 2) had actually been invented. Finding out that video was just a good-natured and well-funded prank BROKE MY FREAKIN’ HEART. I was surprised while I was watching the video that solar roadways, or at least the idea of them, was a very real thing. As the video stated its case for this possible technology of the future, I found myself squirming in my seat. You see, I thought it was a great idea, and that’s why an eerie feeling started to settle in.

I don’t trust good ideas. When someone presents me with a good idea, no matter how alluring, I begin to get very uncomfortable, because that asshole fucking cynic who resides inside of me just keeps poking at me saying, “You know this is bullshit, right? There’s got to be a catch.” Unfortunately, that piece of shit jerk inside my head has usually proved to be right.

Sure, good ideas are great. I’ve even had one or two of them during the course of my lifetime. On those rare occasions that I’ve had a good idea, I usually find it’s a better idea not to follow through with it. Ideas are pure and wonderful and unsullied by stupid things like logistics and reality. Once you try to make them into an actual thing, that’s when they turn to shit. You have to make compromises. You have to, you know, get your ass up off the couch. In my experience, having to do either pretty much sucks.

Part of me very much wants Solar Roadways to be a thing, though. Solar Roadways, started by Idaho couple Julie and Scott Brusaw, started gaining attention in 2010. Scott, an electrical engineer, has received two rounds of funding from the Federal Highway Administration, and it’s not difficult to see why. Solar Roadways would replace all those miles of asphalt just baking in the sun with solar road panels that would soak up those rays and convert them into electricity. With all the parking lots, Interstates, highways and driveways in this country, it’s almost unfathomable to think of the amount of clean energy that many solar panels could create.

They would create safer roads, too, according to the Brusaws. Powered roadways would melt snow and ice, reducing or eliminated the need for salt or sand that damages cars and asphalt roads, and would also filter storm water. LED microprocessors in the panels would allow for greater communication with drivers, i.e. displaying messages as per changing road conditions ahead or even if large animals are crossing the road (you’ll never flatten Bambi’s mom again).

Most importantly to me, though, everything would just look awesome. Gone would be boring, colorless asphalt and in its place would be millions upon millions of colorful display surfaces. It’d be like the Las Vegas Strip, Times Square and pretty much all of Tokyo became the ground beneath your feet. You’d be walking/driving/biking on the fucking future.

Unlike the flying car, Solar Roadways seems like it would improve your commute and life as we know it on the planet. I mean, seriously, that asshole in front of you can barely drive a car that’s bound by the laws of gravity; do you really want him flying around all over the place? Lots of people agree that Solar Roadways would be neato. An Indiegogo campaign started by the Brusaws has raised more than $1.7 million at press time and will run until June 20.

That’s a lot of money, but probably not enough to pay for more than a couple of driveways’ worth of these things. You see, it’s a good idea. But the cost of installing this stuff is certainly going to be astronomical, and then think of the years and years of construction and road closures that it’ll take to make the change from asphalt to the roads of the future. It takes most cities months to fill in a pothole.

I’d really like to see this happen. I’ve seen a lot of technology happen already in my lifetime, but most of it has been bullshit like iPads and smart phones and they don’t really do anything to make society better. I don’t care how sweet those FaceTime commercials are.