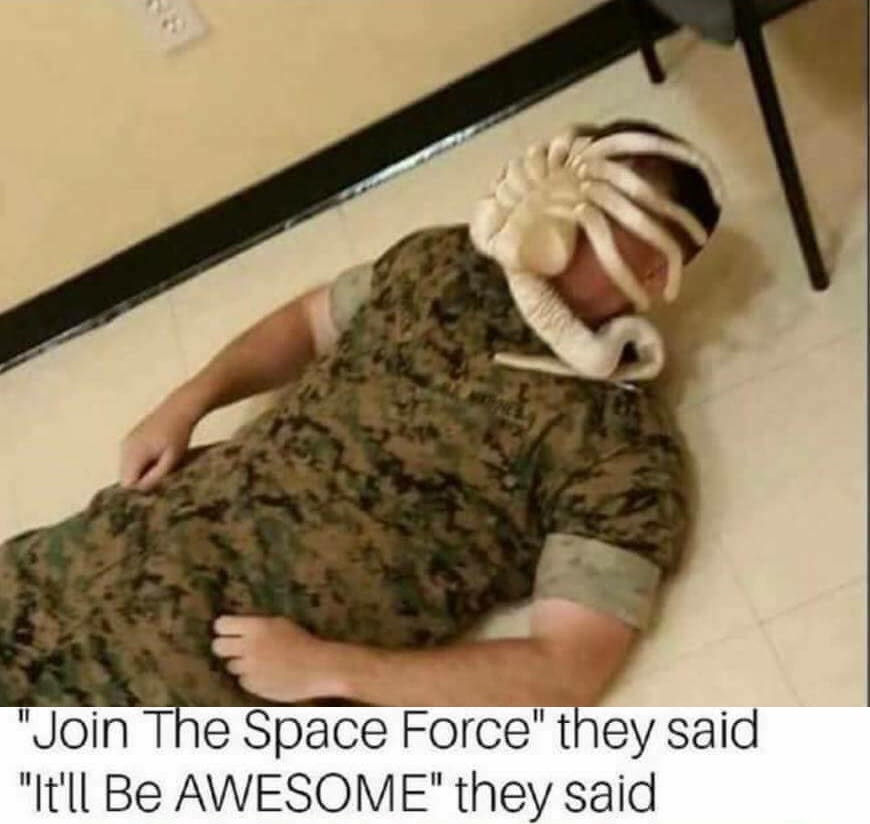 With all the weird shit going on here on Earth, I completely forgot about Space Force. I was in a dollar store when I first heard about Space Force, looking to buy aluminum foil (believe it or not, not to make a hat out of to shield my thoughts from alien brain probes, but for, like, conventional uses) and the radio was on in the store. Some wacky DJ was riffing about how the U.S. President announced that he was going to make Space Force, a new branch of the military that would … um … I don’t know. Do space stuff? Battle Klingons? Make Venus Great Again (and really someone should, because that place is a fucking dump)? But unlike most other things Our Faithful Leader has set into motion, I finally found a policy I could get behind.

After 10 years of doing this column, I’ve probably written about space 2.53 billion times, give or take a couple-and-a-half-billion times. I think a lot of my love of space has to do with the words used to describe it—like, cosmos is a great fucking word. So is nebula and astral and nova. When I say or write these words, it makes me think I’m Gandalf, which gets me even more excited. In fact, the only thing that would be sweeter than Space Force would be if the U.S. President established the Magic Marines, who would keep the country safe from those supernatural forces that lurk in every dark forest, beneath every bed and in your grandma’s creepy-ass attic. If there was a title of, say, Sorcerer General of the Magic Marines to aspire to, I’d probably be more willing to dedicate my life to public service.

But, sadly, no U.S. President has had the vision to address the growing goblin threat that puts all of us in peril. Maybe someday.

Space Force got quickly overshadowed in the news, though, what with ALIENating our allies (see what I did there?) and the growing humanitarian crisis at the border, and rightfully so. These are real things. Real things are way more important than Space Force, which other than being 13-year-old me’s wet dream, was rightfully relegated to just another thing to make a meme about. And if you haven’t had the chance to check out any of the Space Force memes, I highly suggest you do so, because they’re hilarious.

So Space Force came and went out of our collective consciousness. But I wondered, was that all that happened? Was it just another off-the-cuff announcement in a series of endless off-the-wall announcements? Or, were people being employed and taxpayer dollars being spent to actually carry this thing out? More importantly, was my dream of meeting a Wookie any closer to becoming a reality?

I did a Google News Search to find out if there’d been any movements on any of these fronts. There doesn’t seem to be any, though NASA’s chief Jim Bridenstine is pretty stoked on the idea, according to Bloomberg News.

“If you look at what space is, it’s not that much different than the ocean,” said Bridenstine, a former Navy pilot. “It’s an international domain that has commerce that needs to be protected.”

He mentioned that a lot of banking depends upon GPS, and without those satellites, “You lose banking.”

Ugh, boring. Of course all these idiots care about is their stupid banking. You’re trying to create this bad-ass new military branch and send troops to the moon and your main concern is banking? What about Romulans, or intergalactic empires that are the true enemies of life everywhere in the universe? It’s the short-sightedness of the thing that really bothers me.

A writer for Observer.com wrote a musing piece about Space Force that was published on July 12, incredulously titled, “Trump’s Space Force Could Actually Save Humanity.” In the piece, author Neel V. Patel outlined an Armageddon-style scenario in which having a military branch in charge of outer space could save the planet from potential asteroid threats.

“NASA is a great organization, but its primary mandate is to explore space and collect scientific data pertinent to space and Earth. It’s not immediately attuned to thinking about things from a defense perspective,” Patel wrote, and it’s true. Our space shuttles aren’t equipped with sweet photon cannons. But if we did have a force dedicated to keeping Earth safe from errant, planet-killing space rocks, it would certainly dash my hopes of Giant Meteor 2020 prevailing in the next presidential election.

So as of now, it seems Space Force is just a glimmer in the eye of nerds like me everywhere. For now, my lightsaber training will have to be limited to comic book conventions, but I’m going to keep preparing nonetheless.