The Crown Prince of Irony 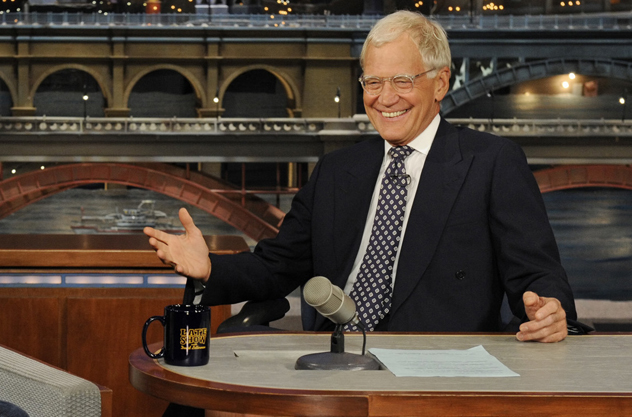 There are far worse things in the world than hearing your favorite late-night talk show host is retiring. I don’t need to list them here (it would take too long), but I was still bummed to hear David Letterman was deciding to hang up his microphone and call it quits in 2015. He’s a lot older than I am, but I feel as if I’ve grown up with him, or more accurately, perhaps, he’s helped shape my personality. I’ll leave it up to you to decide whether or not that’s a good thing.

I don’t remember when I started watching Dave’s little show, but I know I had to be young, because he was still on NBC, on-deck behind Johnny Carson on Late Night with David Letterman. I’m not sure what it was about Letterman that hooked me, but even as a kid, I was instantly drawn to him. It might have been because he looked like the older man I could have grown up to be. He was gangly, had weird hair, wore glasses and had a gap in his teeth. Basically, he was the nerdiest looking dude on television. In an era when male rock stars looked like hot chicks, and hot chicks looked like male rock stars, there was this doofus hosting a late-night talk show. He was entirely uncool, and I loved it.

It was more than I just related to him, but he also gave me hope. In school, I was ridiculed by some of the other kids (I think they call it “bullying” now) because my hair looked like a curly Brillo Pad and I had this nervous tick (I still do) that caused me to emit this strange sort of monotone laugh after everything I say. Basically, I was a fucking dork, and my peers weren’t shy about reminding me of it.

But my parents were pretty cool about letting me stay up as late as I wanted to, even on school nights, and Dave gave me some measure of solace on my worst days. I thought, well, this guy’s a mess, and he’s talking to famous people on television, so clearly bad hair didn’t hold him back.

Not only had I found a kindred spirit, but I was also drawn to his style of humor. Letterman’s sarcastic wit really spoke to me. I loved that he told bad jokes but acted like he knew they were bad, and that’s what made them funny. That’s, like, irony, right? I guess it’s not just for T-shirts after all.

Letterman also brought a whole host of weirdos and nobodies into the limelight, most of whom had no business being on TV. Chris Elliott was an instant favorite of mine, just because he seemed so clueless; Larry “Bud” Melman may have been the most unfortunate-looking human who ever lived; and of course, there was schmaltzy band leader Paul Shaffer, who may have given off the persona of a frustrated wedding singer, but, as Sonic Youth’s Steve Shelley once told me in an interview, was a really down cat. Dave also made celebrities out of common folk, like Meg Parsont, a publicist at Simon and Schuster who he’d often call and surprise with gifts, and Rupert Jee, a guy who owned a deli near the Ed Sullivan Theater in New York City, where CBS’s The Late Show is filmed.

But I guess it’s a different world now. I’m tired of hearing/saying that, but it’s true. No one really watches TV anymore. I must admit, I don’t even get to watch The Late Show as much as I used to. Working nights is part of it, but also I’m so tied in with binge-watching shows on Netflix and diddling around and “liking” shit on various social media sites, I hardly have the time to actually sit down and watch the tube any more.

Jimmy Fallon is much better suited to navigate the changing media landscape. Sure, he has a traditional television show, but he’s keen to post plenty of clips on the Internet. At least a handful of links to a video of something Fallon did with a Muppet or whatever pops up on my Facebook feed every day. I hadn’t seen mention of Letterman at all on Facebook until he announced his retirement. That’s sad, I guess, but not really a shock.

Though Letterman hasn’t yet said his final “good night” to his audience, speculation is already swirling as to who will fill his slot. Howard Stern, Chelsea Handler and Stephen Colbert have all been tossed into the discussion, and I guess any of them could do a good job and bring new energy to the late-night airwaves, but I don’t think any of them could hold a candle to Dave.

Syracuse University media professor Robert Thompson, quoted in a Los Angeles Times article, said of Letterman, “He is the crown prince of the new age of irony. He did more of a parody of a talk show than a talk show itself, and that’s what they’re all doing now.” That’s all very fitting, but I’ll always remember Dave as the dude who taught me it was cool to be nerdy decades before it was actually cool to be nerdy. Thanks, bro.