The Devil and the Deep Blue Sea 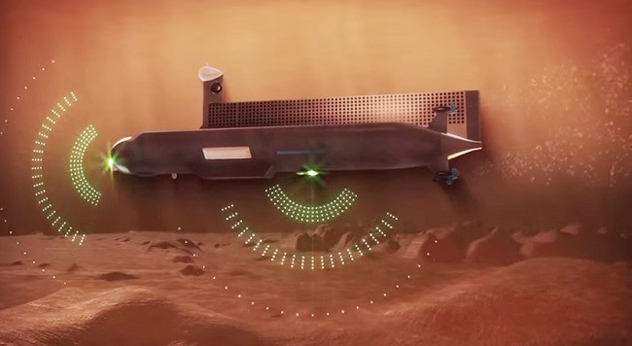 A little while back, NASA announced it was ditching its space shuttle program. This more or less squashed whatever meager hope I had of ever going into outer space. I was bummed. But NASA hasn’t gone quietly into the deep, dark night of space where no one can hear you scream. No, they’re still kicking, with one eye on the sky, and the other focused on the Big Blue Marble we all call home—for now.

The space shuttle might be dead, but how about a space sub? No, not an intergalactic sandwich, but a submarine that explores the seas of spaaaaaaaaace. NASA just released plans to create a nuclear-powered, robotic submersible craft that could explore bodies of water on far-off moons and planets. Currently, NASA is targeting Kraken Mare on Saturn’s moon Titan as a possible place for Space Sub’s first mission.

Kraken Mare is roughly the size of one of the Great Lakes and made up of super-cold liquefied gas, kind of like the Pacific Ocean off the coast of Santa Cruz. Space Sub will be outfitted with a seafloor camera and sampling doo-dads that will check out tides, weather, explore the shoreline and, of course, search for signs of life, because that’s all we’re really looking for.

Let’s be honest, it’s kind of lonely floating around two planets away from the sun. We’ve been here as a species for, like, a million years or something, making war and iPhones and all kinds of shit and no one out there has taken notice, or if they have, they haven’t shown up in giant mother ships and been all, “Hey everyone, what’s up?”

What could possibly be floating in the “waters” of Kraken Mare is anyone’s guess, but the concept video NASA posted to YouTube looks like just about the coolest video game ever. It shows a hazy, orange seascape with mountain peaks in the distance and the ghostly rings of Saturn hanging ominously in the sky. Then Space Sub submerges and we get its POV through its seafloor camera. You keep hoping something will pop up and scare you, but nothing does. It’s just dirt or rocks or whatever. I guess we’ll just have to wait until Space Sub makes its maiden voyage, which won’t be until at least 2047. I’ll be 71, hopefully retired and piloting a Winnebago (or a Hover Winnebago, perhaps). No Space Sub captaining for me—sigh.

Meanwhile, on Earth, we may not have that much time. In a study authored by Benjamin Cook, a climate scientist for NASA’s Goddard Institute of Space Studies, western America may be on the cusp of the worst drought we’ve ever seen in modern times.

It’s not just any drought, but a MEGADROUGHT (caps mine), which is a prolonged dry spell that could last for decades. Greenhouse gases are contributing to rising temperatures that may cause northern areas to become wetter and southern areas to become drier. However, the rising temperatures will lead to faster evaporation, which means even if you’re getting more rain and snow, it’s going to shrivel up a lot faster, which basically means…like, we’re fucked.

That seems to be the gist of every study lately. This is a thing, this global warming, whether some of us want to believe it or not. Let’s just agree, for argument’s sake, that it’s a thing. But like even if we all buy Priuses and bike everywhere for the rest of our lives, it seems like we’re still going to be fucked. I’m not saying you shouldn’t buy a Prius and/or bike everywhere. Go ahead and do it. It won’t hurt, I guess, and hey, maybe it will even delay our impending fuckage, but just be aware that no matter what we do, we’re still going to be fucked. If you don’t think droughts are that big a deal because you can always run to Costco and buy cases of Poland Spring, then think of the Ancestral Pueblo people, whose civilization crumbled thanks to drought. And they walked everywhere. They never even heard of Hummers.

Maybe it’s all the allusions to mythology or awesome sci-fi hyperbole of attaching “mega” to things, but these kinds of stories always make me think back to the movies I loved as a kid, like Clash of the Titans in the case of Space Sub or the Godzilla franchise in the case of us all dying in some kind of environmental cataclysm. As far as the latter is concerned, I’m thinking specifically of Godzilla vs. the Smog Monster, which sort of took Big G back to his roots as a cautionary tale of why humans shouldn’t mess with Mother Nature. Whereas Godzilla was a result of the nuclear arms race, the Smog Monster was born of the pollution that’s choking our cities. Godzilla defeated the Smog Monster thanks to his awesome breath weapon and a kick-ass, trippy J-pop song. I’m not sure if Godzilla would be able to rescue humanity from drought, though. With any luck, we’ll all be kicking it on the shores of Kraken Mare by 2050, so we won’t have to worry about it.