The World According to Mooch 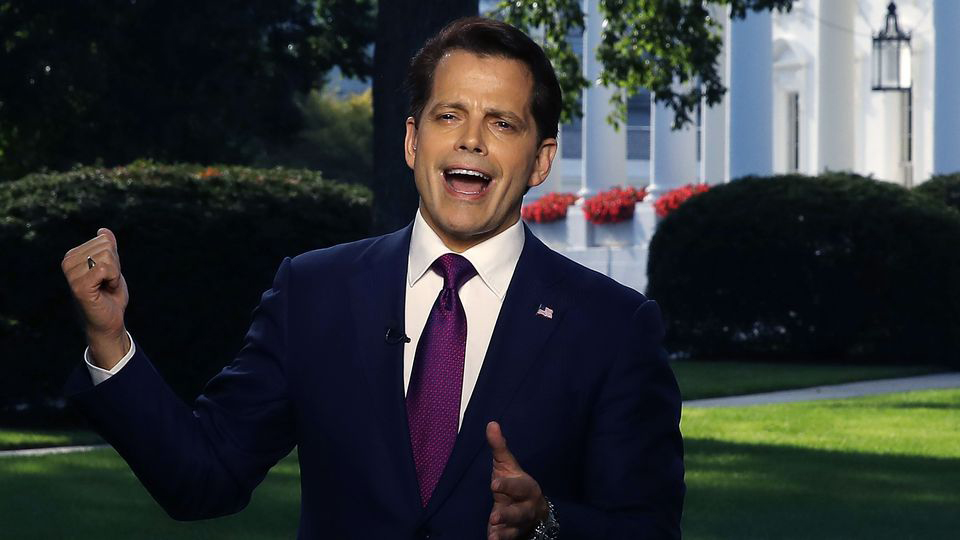 I didn’t get to write about former White House communications director Anthony Scaramucci, because his 11-day reign as the Eye of the White House press shit-storm was so brief. I wanted to say that he was the only person appointed by President Trump that I actually liked; not because I thought he was a good guy or competent or that he was going to restore some semblance of normalcy and order to this administration, but because he was probably going to do the exact opposite. I mean, yeah, I’m sure he’s a smart guy. Scaramucci is a self-made man from a middle-class family who made it to Harvard and into the upper echelons of the financial world. That’s admirable and all, but you had to figure that someone nicknamed “The Mooch” could only make a disastrous situation even more disastrous.

The Mooch re-emerged from his failed marriage and even more failed political career to speak with George Stephanopoulos on ABC’s This Week on Aug. 13, 2017, and if you missed the interview, you can read the full transcript on ABCnews.go.com. I highly suggest you do, because it’s fucking amazing.

Here’s just one exchange between Stephanopoulos and The Mooch regarding the former’s infamous interview with The New Yorker’s Ryan Lizza … you know, the one about Steve Bannon sucking his own dick (thanks for an image I’ll never be able to unsee):

George Stephanopoulos: Of course that was your conversation with Ryan Lizza of The New Yorker.

Anthony Scaramucci: Which, for the record, I thought was off the record.

GS: But you didn’t ask for it to be off the record.

AS: I understand that, but this is the reason why the media gets a bad shake from the American people. That was a very deceitful thing that he did.

I love this sort of stuff. There was one time earlier in my career where I did an interview with a local theater company for another publication. One of the founders of the theater company, a student-run organization, had some biting words about the local university’s theater program, which I, of course, printed in the article.

I bumped into the person I had interviewed at a party after the article had been published. She told me that she had took exception to what I had wrote. I said that I hadn’t made anything up and that I had quoted her accurately and if she wanted to hear the tape I could play it back for her. She agreed that she’d said what she’d said, but then tried to convince me that she hadn’t said it. I don’t remember her name or know where she is now, but I bet she’d be a great candidate for The Mooch’s vacated position.

I’m also pretty sure that the “bad shake” the media is getting from the American people has less to do with reporters doing their jobs and more to do with The Mooch’s former boss tweeting about how you can’t trust anything the media says—unless, of course, it’s reporting on what a great job he’s doing. But, you know, what do I know? I pissed off a local theater company once. I’m obviously the devil.

Stephanopoulos went on to grill Scaramucci about his claim in the same taped phone conversation that seemed to imply that he had “digital fingerprints” that may or may not have implicated Steve Bannon and now-former White House chief of staff Reince Priebus in leaking sensitive information.

“They’re going to get prosecuted, probably for the felony, they’ll probably get prosecuted for that,” The Mooch told Lizza; however, he told Stephanopoulos that his prior statement was “misconstrued.”

“I was just implying that, at some point, the Department of Justice would be able to figure out who the leakers are inside the national security system that are actually doing things that are against the law,” he awkwardly attempted to clarify to Stephanopoulos.

Though Scaramucci began the This Week interview critical of President Trump’s wishy-washy response to the tragic events in Charlottesville, Virginia, this weekend, the Mooch remained loyal to the president and his agenda (whatever that is). He also played up the current narrative that Trump is being undermined by his own White House and those insidious Washington insiders that want to rape your babies or whatever.

“I think that there are elements inside of Washington, also inclusive in the White House, that are not necessarily abetting the president’s interests or his agenda,” the Mooch said. “I absolutely believe that, yes.”

If you’re as exhausted by all this stuff as I am, don’t worry. Assuming we’re not all bombed to oblivion before then, in 20 years, we’re all going to share a good laugh about this.