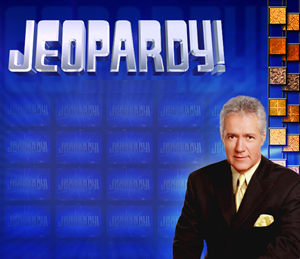 Like most well- to highly educated people in the world, I like to think of myself as a smarty pants. I find that I often have to limit the flow of the font of information that will gush from my brain and out of my mouth so I don’t sound like an asshole in conversation. I’m very self-conscious about this. In fact, if you’re ever blessed enough to speak with me in person, and I begin a sentence with the words Well, actually”¦(the very inflection of which will make them sound as if they’re italicized) feel free to punch me in the face. I probably deserve it. However, one time a night, I open the dam keeping at bay all the useless knowledge gurgling in my ginormous skull, and that’s when I’m watching Jeopardy!. When that happens, watch out—here comes the flood.

I’m not arrogant enough to think I’m always the smartest person in the room, but when I’m watching the show alone, I’m certainly in the 99th percentile. And in the comfort of my own home, when I don’t have the pressure of buzzing in, forming my answer in the form of a question or competing against other brilliant men and women under the glare of studio lighting and the watchful eye of a nation with thousands of dollars on the line, I’m like a fucking sniper with my knowledge rifle. Nineteenth century American Literature for $1,000? No fucking problem! I know that shit. And I can’t believe none of these other morons do. Harvard my ass. Vassar ain’t got nothing on me.

My mother would always say, “I don’t know why you don’t go on the show.” I’m sure this is something most mothers say to their smarty pants sons and daughters. I’ve just never been one for the spotlight. Still, she persisted—not just with urging me to try out for Jeopardy!, but also other television quiz shows.

Alas, I’m a man with a face for print. My mother wouldn’t let up, though. I’m sure it’s because she really believes in her heart of hearts that her baby boy is bright enough to go toe to toe with any other nerd in the country; however, I think she’s probably also tired of the regular and pathetic requests for financial assistance in this difficult economy. Winning $50,000 on a game show would certainly keep such pleading at bay, long enough so she and my father could pile into the family truckster and haul ass down to Atlantic City, N.J., where they could make it rain nickels at the slot machines and gorge on crab legs at the buffet.

This past week, she informed me that Jeopardy! was offering their contestant tests on “the online.” I hemmed and hawed about it, but eventually, I signed up figuring that even though my cranium is heavy with facts, I had little or no chance of ever making it on the show.

Though I was resistant to the idea of trying out for the show, once I signed up, the delusions of grandeur were instantaneous. I saw my image beamed to homes across the world as I engaged in witty repartee with Alex Trebek and decimated my competition. Five-day champion? Without a doubt—Jeopardy! Tournament of Champions, here I come!

Then I took the test. It was composed of 50 questions on a wide range of topics—from literature to U.S. Presidents to pop culture—with an allowance of 15 seconds to answer each one. You did not have to phrase your response in the form of a question, and last- name only answers would be counted.

I’ve never been skull-fucked before, but I’d imagine it feels a lot like the Jeopardy! test. I think I got about 30 out of 50, and that’s being generous. I may never know. As I later found it, I’d be contacted sometime in the next 18 months in the event that I passed the test and they wanted to grant me an interview. In the meantime, I’ll be bandaging my bruised ego and slaying Ivy League grads from the comforts of my living room. An empty victory you may say; well, actually”¦