So Supreme Court Justice Antonin Scalia died. I’m sure a lot of us have a lot of opinions and feelings about this. It’s all over Facebook. It became an immediate hot-button topic of the Republican presidential debate (not that I’d watch such a thing, but I saw clips … unfortunately).

How do I feel about it? I don’t know. He was a guy, I guess. He did pretty well for himself, becoming a Supreme Court Justice and all. That’s more than I’ve ever done. I guess I always saw him as the ultra right-wing uncle who always says things that makes your eyes roll when you see him once a year at Christmas. You just figure he’s always going to be there spouting off against welfare or something, and that’s comforting in a way, to know you’ll always have that outrage to rely on. But instead of just talking crazy shit, Scalia actually had the power to transform his ideology into law. So, I mean, there’s that.

But he won’t be able to rail against abortion or gay rights anymore. Now he’s just where we’ll all end up eventually. He’s gone off to the same place where all the ultra-conservative uncles go when their time has come. Is it heaven? I don’t know. I just write a column. (Could you imagine what that Christmas dinner table would be like if it was?)

Maybe we all just end up in the same place. Like, the ground, or the primordial soup that takes all our molecules and distributes them into new life. Maybe one day, we’ll see a bit of Scalia in a poodle or the leaf of a palm tree. It wouldn’t be so bad to be a palm tree, I’d bet.

Death is nothing new, unfortunately, and not everyone who dies is as cool as David Bowie (who was awesome). Not everyone who dies is someone. Sometimes it’s something, like a “giant vegan bird” that “prowled prehistoric Arctic,” according to my favorite headline of the day on the Christian Science Monitor website. 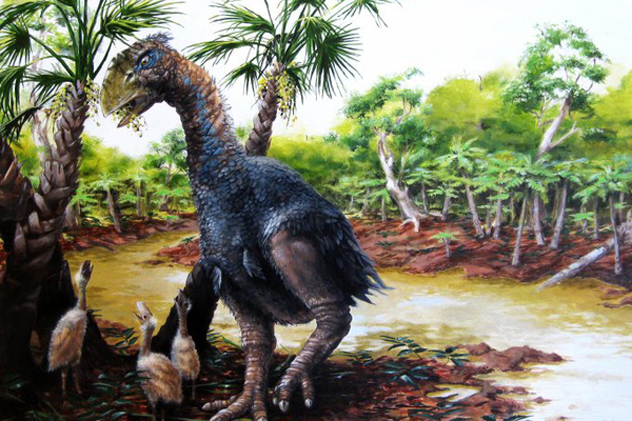 Much like our departed Supreme Court Justice, the Gastornis has shed its mortal coil and is one with the cosmos—albeit it walked the earth during the Eocene epoch some 53 million years ago. The Gastornis was quite a specimen. It was 6 feet tall, and probably weighed a few hundred pounds. Luckily for whatever roamed around the world at the same time it did, this gargantuan, flightless bird likely only ate “leaves, fruits and seeds.” Just a single toe bone of the creature was found on Ellesmere Island in the Queen Elizabeth Islands in the Canadian Arctic Circle, but it led researchers from the University of Colorado Boulder and the Chinese Academy of Sciences to some amazing discoveries.

The toe bone matched fossils of a Gastornis found in Wyoming some 2,500 miles away, which means that even though the bird couldn’t fly, it still got around. Bird fossils are a rare find in the Arctic because it’s cold as fuck. Ellesmere Island, for instance, can see temperatures of negative 40 degrees Fahrenheit, which probably makes you feel like a wuss for packing “warm socks” for a trip to Tahoe in May. However, back in the day, when Gastornis and Presbyornis, a smaller bird whose fossils were also discovered on Ellesmere, strutted their stuff around the Eocene landscape, the climate in the Arctic was much different. It was more akin to the temperatures we’d now see in the Southeastern United States. Perhaps this is why Ellesmere has yielded so many cool and diverse fossils, like primates, fish and crocodilians, according to the article on Csmonitor.com. And perhaps all these beasties could make their way up to the Arctic again?

According to Jaelyn Ellerbe, one of the study’s authors, learning more about what Gastornis was up to in the Arctic all those millions of years ago could give us a clue about how the region is affected by climate change, which, I hate to break it to you, is a thing.

“What we know about past warm intervals in the Arctic can give us a much better idea about what to expect in terms of changing plant and animal populations there in the future,” he said, though he stopped short of suggesting that he thought polar bears would soon be replaced by Arctigators (I just made that up).

But how cool would that be, huh? Like, if climate change meant alligators would grow plush white fur and pigeons would morph into 6-foot-tall vegan birds? When it’s my time to venture into the Great Beyond, I’d be honored if my molecules somehow found their way to make up part of some roided-up polar ostrich, wandering around the post-climate change wilderness in search of nuts and berries, and maybe my molecules will be right there next to Justice Scalia’s, and it wouldn’t matter that in our previous incarnations, we would have been total political opposites, because we’d now be a giant bird. And giant birds are awesome.