White, floor-to-nearly-ceiling CD-formatted shelves wrap around the half of the 15-foot long by 6-foot wide studio not filled with soundboards and wires. Little more decoration is needed than the hundreds of multi-colored cases.

Among the “Electronica” and “Alt/Indie” with “Local” and various genres in between, pictures of antennae-d robot mascot “Sparky” hang high on the wall, watching over volunteer DJs, talkers and broadcasters.

With the hope of “forging the way for E-music,” KSSU has been recognized for their programming.

In 2009, the mtvU College Radio Woodie Awards ranked KSSU in the Top 10 of U.S. and Canadian college radio stations. Earning “Station of the Year” and “Best Student-Run Station” from College Music Journal were two of the five big wins in 2009, with 12 nominations in total.

Broadcasting at 1580 AM on the dial and Kssu.com online, KSSU provides local and international listeners with college radio year-round. KSSU accepts and trains volunteers fall, spring and summer. Some KSSU alumni are allowed to return, but most volunteers at KSSU are students.

“KSSU is reserved to be the voice of the students,” said Susie Kuo, station advisor and former longtime KSSU volunteer.

After a rigorous broadcasting training boot camp, volunteers complete at least 15 hours of service a semester by hosting a live show, working at on-campus events, contributing to KSSU’s “blogazine” or screening submitted music to adhere to FCC regulations.

Film production junior Tyler Wyckoff, aka “Cadaver the Rapper,” didn’t slip while rapping live on his first broadcast of The Cap City Collective, incurring no potential fee from the FCC.

As it was his first show, and first live KSSU flow, backup was in-studio. Directing sound level changes and offering tech support, Kuo and station manager/history senior/ resident metal head Brian Bautista sat in the adjoining office to Wyckoff with a window view into the studio.

Beginning as KEDG in 1989, the Associated Broadcasting Club was the jump-off point for Sacramento State’s student-run radio. The following years shaped the student club into a ratified student radio station.

The process of establishing a college radio station at Sacramento State was nebulous, much like the process through which first-time parents rear a child. With such tricky changes, setbacks and encounters of the administrative kind, turning a club into a legitimately ratified radio station took cultivation. Co-founders Jim Bolt and Chris Prosio–both Sacramento State 1991 graduates–consider KSSU their baby, as stated in a letter to KSSU DJs and staff in May 2009, provided by Kuo.

They wrote how two years of sorting things out with administration and setting actions in motion to establish and cement a student-run radio station “certainly felt like a birthing process.”

The student-run station officially became known as KSSU at 89.7 FM in 1991. And Prosio and Bolt’s baby was born.

Frequency changes took place, as did management and semester volunteers.

“Since 1979, the various FM frequencies belonging to Sacramento State were consistently allocated to news and jazz programming by NPR on Capital Public Radio, instead of being the voice of the students,” Kuo said.

Since space on FM is very limited and Sacramento State already owned two frequencies received after applying with the FCC, KSSU found a home at 530 AM in 1991 before transitioning to 1580.

With a past of receiving coveted FM frequencies, there must have been times when feelings weren’t friendly. But KSSU and Capital Public Radio have been bridging the gap for years and are now broadcasting buddies. “I think they like how cute we are,” Kuo admitted.

The “Capital” has just recently made bigger moves in streaming live on the Internet, but the “cute” has been sending e-waves out in the world for some time.

The current KSSU AM frequency is essentially null and void, powered by 3 watts (or 3000 miliwatts, which Bautista said he thought sounded more robust), functioning off of Sacramento State’s carrier current. An electric toothbrush charger requires 10 watts and that laptop used to listen to your MP3s requires 50. No wonder the frequency can’t even be picked up at many locations on campus, or even near the alley-hidden studio.

To be heard, the station had to reach listeners. In 2004, volunteer Melissa Maxwell initiated the process of putting KSSU online, so students could listen to music and miscellaneous streaming online from a computer. Kssu.com went live in 2005.

After very resourcefully sending KSSU into the digital age, Melissa Maxwell went on to work for Entercom with local commercial radio The Eagle, 98 Rock and KWOD (RIP) and is currently doing technical operations and promotions at 94.7 FM.

Maxwell is one of quite a few past KSSU volunteers to successfully capitalize on what they learned doing college radio. Some should-know names in the local spinning scene include DJ Rob Fatal, DJ Mike Colossal, DJ Rated R, Elliot Estes (who currently DJs at The Park), and DJ 671. During the late ‘90s, Marie VanAssendelft was a volunteer at KSSU and went on to work for McGathy Promotions, doing marketing and publicity for Elmo.

Since on-air streaming was jimmy-rigged for KSSU in 2005, tracking the number of listeners is impossible. Therefore, listenership is estimated by public interaction with KSSU through social networking followers, friends and posters, and listener calls. Although inaccurate for statistics, monitoring public involvement is a good way to see which shows listeners are paying attention to and tuning (or streaming) in to.

Sac State Sunset’s prime time slot from 8 to 10 p.m. on Thursdays was earned as reflection of the hip-hop and reggaeton-spinning show’s popularity.

Five years ago, DJ Vince Vicari aka “Dub V” aka “El Doble Frijole” (“V” is a difficult letter to pronounce in some languages, like Spanish, Vicari said) began his DJ-ship at KSSU with an a.m. show called Sac State Sunrise. With co-host Britney Rossman, aka “B-Unit,” the show caught listeners’ attentions and was re-situated on Thursday nights.

On hiatus during the summer, Vicari and Rossman reunited on-air Thursday, Sept. 2 to commence the last semester of their KSSU radio show.

Re-acclimating himself with the in-studio multi-tasking of interacting, storytelling, social networking, PSA-ing, logging, playing music and hopping out to the waiting area to jam down food, Vicari said it was a lot to do but has become second nature.

“It’s almost like we’ve been doing it our whole lives,” he said to Rossman on-air about their first show of the semester. “But we’ve been gone for a while.”

While discussing summer experiences, plans for the future and answering listener calls with “You’re on air, watch your mouth. Who is this?” the fire alarm went off. Bautista said, “Your show is too hot!” while Vicari reminded listeners as he has before: the show will continue until he graduates or the studio burns down. Luckily for listeners, it was a false alarm. 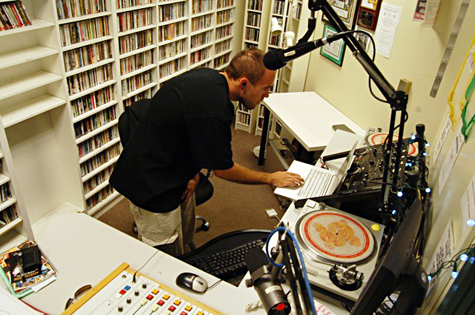 KSSU is one of only a few organizations under the Associated Students Inc. that generates revenue. Even so, their resources are limited, sometimes causing technical difficulties.

Although broadcasting on an insignificant frequency and with some “older” equipment and accoutrements, KSSU seems to make good use of what it has available.

“We’re known for being really scrappy,” Kuo and Bautista explained. “We do some MacGyver Stuff.”

Seems like they earned that “2009 Best Use of Limited Resources” award by CMJ, a Billboard for college radio.

With its 20th birthday approaching on May 14, 2011, KSSU has been pooling resources to spiff-ify its image and broaden its reach.

KSSU understandably markets itself as an online radio station, but it seems to like holding on to the past and look toward the future.

Looking to have an audible presence on the dial, KSSU is partnering with outstanding local radio station KYDS 91.5 from El Camino High School. Soft-rolling Oct. 1, KSSU will fill space and send waves of music daily from 4 p.m. to 2 a.m. Due to “immense technical issues,” KSSU programming on 91.5 will be pre-recorded content, although Bautista said they would love to go live.

In true studious collegiate fashion, KSSU has been planning to celebrate their 20th birthday the entire year before the real celebration begins.

This next academic year should see a solid lineup of events and programming, as well as improved streaming and a Kssu.com website revamp.

It’s all a warm up for the big shebang; A blast that will only get the e-waves crashing, rocking the streaming radio boat.