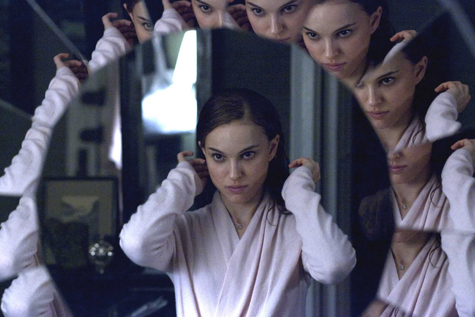 When Thomas Leroy (played by French actor Vincent Cassel) announces to his ballet company that the next season at New York’s Lincoln Center will open with Swan Lake, he acknowledges that it’s an obvious, even overdone choice. But, he tells his attentive company, their production is going to be different. It will be stripped down, visceral and star a new face in the role of the coveted Swan Queen. A group of young dancers are left to vie for the vacated position of the remarkable, but aging, principle Beth MacIntyre (Winona Ryder), and the stage is set for a film rife with betrayal, jealousy and competition. What we get in the hands of director Darren Aronofsky (Pi, Requiem for a Dream) is something far more frightening.

Nina Sayers (Natalie Portman) is a young woman living in a posh Manhattan neighborhood with her ex-ballerina mother (Barbara Hershey). Nina is quiet and meek, but there’s no denying her skill. She has been with the company a while, but has yet to be featured. It’s not her precision that’s in question but her passion. However, when she finds out she’s being considered for the role of Swan Queen, she begins to struggle with her own ambitiousness. After her audition goes poorly, she gets dolled up and confronts Leroy. He forces a kiss on her, and when she bites him in response, Leroy changes his mind about who would play the lead and gives the role to Nina. What follows is an unnerving psychological/psychosexual thriller that burrows deep into the darker recesses of the human mind.

Nina’s meticulous, precious nature is a sharp contrast to the city around her. Her bedroom at home is done up like a sanctuary for a tween girl: stuffed animals populate every nook and cranny, she lulls herself to sleep by listening to an old ballerina music box. Outside, the pace and noise of the city must be torturous for someone so sheltered and fragile. Still, Nina seems unfazed. She functions, and even excels in some regard in a demanding field, but there are clues that everything may not be going well behind the tranquil, perfect exterior. Early in the film, her mother spots a rash on her back and asks if she’s been scratching again. It’s the first sign that something may be off.

Portman is fantastic in the role. Nina is taken on quite a journey over the course of Black Swan’s near two-hour run time. She goes from wallflower to raging diva to vixen, but never loses sight of Nina’s heart-wrenching vulnerability–not to mention deftly handles the demand of numerous ballet sequences. Mila Kunis, best known for her work in television’s That ‘70s Show, plays Lily, a new dancer to the company who arrives from San Francisco and serves as Nina’s main foil. Whereas Nina is achingly exact in her quest for perfection, Lily is a free and wild soul. Kunis plays the part well, but it’s the shifting dynamic between the two characters–at once friendly, competitive and seductive–that firmly cements Black Swan as an exquisite mindfuck.

From the opening sequence, a sparsely lit overture featuring Portman and a male dancer, the film grabs instant hold. Visually stunning, sharply written (a good dose of black humor here and there eases some of the tension) and frighteningly suspenseful, Aronofsky and screenwriters Mark Heyman and Andres Heinz craft a dizzying play within a play (or ballet within a film). Much like the art form it’s mimicking, it starts slow and builds toward a fever pitch. The night before Nina’s first performance as the Swan Queen feeds from the ominous tension that builds throughout Black Swan and regurgitates it as unholy terror–the kind that can only be released by the demons of one’s own mind. It’s easy to throw around praise such as “film of the year,” but with something as good as Black Swan, the slipper certainly fits.