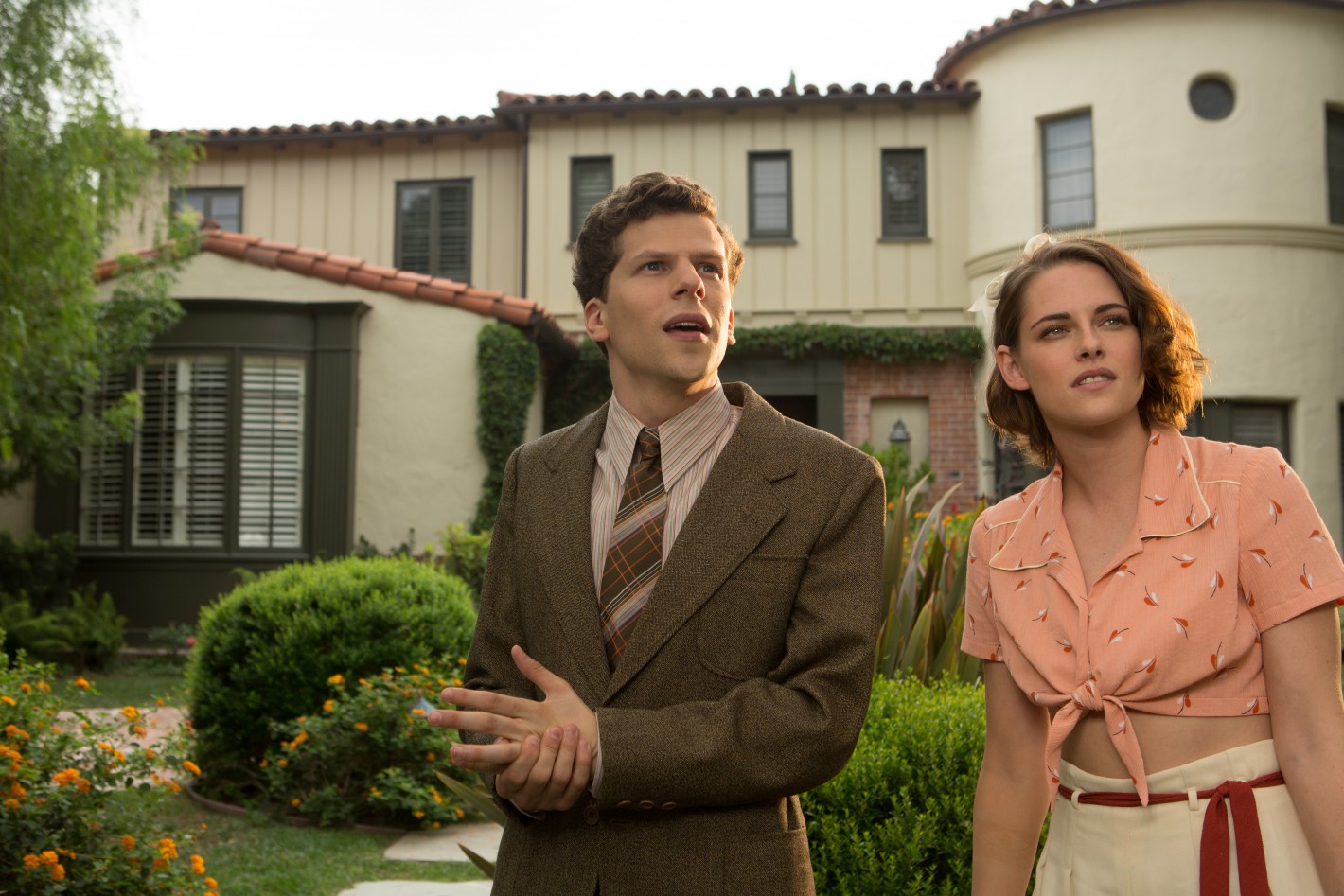 So, when you think of summer movies, you probably don’t think of Woody Allen. You’d probably rather see Matt Damon blow shit up in Jason Bourne. Allen’s latest, Café Society, starring The Social Network’s Jesse Eisenberg and The Twilight Saga’s Kristen Stewart, saw its wide release in theaters the same weekend as the aforementioned action/thriller and provides a sublime counterpoint to the usual big budget summer movie fare.

A period piece set in Hollywood and New York of the 1930s, Café Society is an emotionally charged romance oozing with sumptuous production value. Bobby Dorfman (Eisenberg) is a Jewish kid from the Bronx with a doting mother, a no-nonsense father and a brother, Ben (Corey Stoll), a hardened street thug who could have stepped out of a Scorsese movie. Bobby is directionless and hoping to make it big, though he’s not quite sure how, in Hollywood, where his uncle Phil Stern (Steve Carell) is a power agent who rubs elbows with Tinseltown’s elite. Phil reluctantly takes Bobby under his wing, and in so doing, introduces him to Vonnie (Stewart), Phil’s secretary.

Bobby falls for Vonnie at first sight. Not only is she beautiful, but she’s smart and seems to shun all the glitz and glamor that originally lured Bobby out to Hollywood. She makes him realize what’s really important in life. They share days at the beach, and dine at her favorite restaurant, a hole-in-the-wall Mexican joint. The only problem is that Vonnie’s got a boyfriend, a journalist, or so she says. Though Bobby’s love may go unrequited, the two share a bond that eventually buds into a real romance, and turns into a love triangle that drives the film.

Café Society’s most striking quality is just how beautiful it is. Visually, the film is simply stunning. Whether we’re witnessing a quiet moment on the beach between Vonnie and Bobby, or a fly on the wall at one of Uncle Phil’s lavish parties, or watching a jazz band tear it up at some tiny Manhattan club, or beneath an elevated subway stop in the Bronx, it’s easy for the viewer to get lost in this peek into post-Depression era America. Allen may not have state-of-the-art special effects at his disposal, but he does have Vittorio Storaro, Academy Award-winning cinematographer for Apocalypse Now (which just happens to be my all-time favorite movie). In Café Society, Storaro proves himself to be a true artisan adding a perfect touch of dreaminess to each frame.

There are also some fine performances, most notably from Stewart, who is often, perhaps fairly, maligned. Vonnie feels like the perfect fit for her. The character is aloof, yet amicable; intoxicating, yet infuriating. As Vonnie and Bobby’s lives take them down separate paths, Stewart imbues her character with real growth and scope. It’s really fun to watch. Her beau, Eisenberg, seems to have been grooming himself to star in a Woody Allen movie his entire career, and he doesn’t disappoint here. Bobby, too, goes through quite a change during the course of Café Society, from the wide-eyed, deer-in-headlights kid to eventually running his brother’s nightclub in New York, and Eisenberg is up for the challenge.

It’s the growth and change in the two central characters that are the most remarkable aspects of Allen’s script. The film runs just 96 minutes, but there’s such breadth in the storytelling. The movie feels like a real journey through the most important years of these two young peoples’ lives.

However, the script does feel a bit short on laughs. Ken Stott and Jeannie Berlin (playing Bobby’s parents Marty and Rose, respectively) are given the best banter, and they knock it out of the park, providing Café Society’s best stabs at humor. Also, Ben’s prefered method of disposing of the bodies of his rivals (burying them in cement), provides a few dark chuckles. In other spots, though, attempts at humor fall flat, such as a sort of clunky and awkward scene between Bobby and a prostitute very early on in the film. And though Allen doesn’t appear onscreen in Café Society, he does serve as narrator; however, his voiceover often falls into heavy-handed exposition.

Still, there are some wonderful scenes and themes in Café Society that make it the perfect date movie to discuss later over a bottle of wine. It delves deep into the idea of love and whether or not it’s possible to love more than one person. It poses the question that if an emotion can be so strong, can it ever really die?

But this is a Woody Allen movie, after all, you’ve got to expect that you’re not going to get a straight answer.