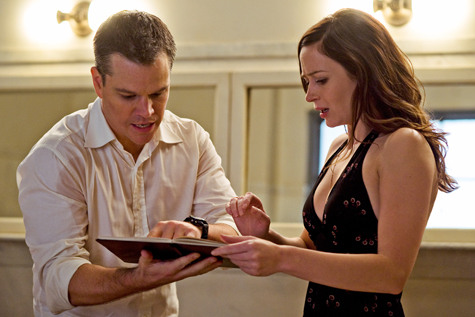 Is there a greater power steering this crazy ship called life? If there is, most times it seems like He/She is asleep at the wheel, or at the very least well above the legal limit. And if destiny does rule all, then what about free choice? Did I order that Big Mac because I chose to do so, or was my desire to nosh on said treat at 2 a.m. just a cruel machination of Fate? Common questions of life and humankind’s place in the world are tackled in the George Nolfi film The Adjustment Bureau, based on a short story by science fiction master Philip K. Dick.

The audience is thrust into a New York State Senate race with Matt Damon playing David Norris, a sort of maverick (for lack of a better term) democrat congressman from Brooklyn. He’s young, brash and shoots from the hip, but for real and not in the bullshit way politicians usually do. At 24, he became the youngest congressman in U.S. history, and now he stands ready to fight the good fight in the Senate. However, his bravado works against him, and when a New York City tabloid runs a picture from an old prank he pulled in college, Norris’ double-digit lead takes a nosedive on Election Night. He ends up getting trounced.

But, all is not lost for young Norris. As he readies his conciliatory speech in a men’s room at a fancy New York City hotel, he encounters Elise Sellas (Emily Blunt), a beautiful and impulsive dancer who captures Norris’ heart as if she was fated to do so. What seems like a simple love story becomes more complicated, however, as a clandestine agency seems to be tracking Norris’ every move. When one of the agents makes a critical misstep, Norris steals a peek behind a curtain “he wasn’t supposed to know existed.” The agency works for a Chairman–what humans understand as God or one of its many incarnations–and makes sure His plans are followed through. Now that Norris knows this, he can go about his life, but he can never tell anyone or he’ll have his mind erased–oh yeah, and this plan doesn’t include Sellas, so he better put it back in his pants.

Norris just can’t shake that mysterious woman from his mind, however. What follows is a sort of sci-fi/fantasy-tinged romance as our two lovers try to overcome the many obstacles fate puts in their way to be with one another. It’s really a sweet story at its heart, but The Adjustment Bureau seems to suffer from an identity crisis.

The Adjustment Bureau does a great job setting the scene. Cameos from New York City Mayor Mike Bloomberg and The Daily Show host Jon Stewart create a solid, real world foundation for what becomes an otherworldly story. A smart move, considering Nolfi and company are asking a lot in the way of suspending your disbelief. Using doors, the agents can seemingly fold space and travel very quickly. They can also manipulate people’s reasoning and alter the course of events if they deviate too far from the plan. This is all well and good, but the script seems to linger too much on explaining these tricks of the trade (without really explaining them) and cataloging the agents’ limitations, which only dilutes the plot’s central focus, the serendipitous romance between Norris and Sellas. When Blunt and Damon are charged with intimate scenes, they flourish, but much like their stop and start courtship, the film often interrupts this budding relationship with more vaguely worded exposition about plans and agent strategizing.

What we have here is a sort of Frankenstein’s monster that harks back to films like the romantic comedy Serendipity, quirky sci-fi romance Eternal Sunshine of the Spotless Mind and the philosophy-drenched action film The Matrix. But The Adjustment Bureau isn’t as successful as any of those mentioned. It is, however, a light-hearted film that’s perhaps trying too hard to make a point. You can’t really blame it for trying.