Have you ever been to a Hell House? That unique American phenomenon in which certain churches organize lurid walkthroughs geared toward teenagers prior to Halloween? Depictions of abortions, car accidents, rape and suicides assault the senses of horrified attendees who all end up in the climactic “Hell” room, where the wails of the tortured and the taunts of demons press in on you in the dark! If that isn’t exciting, I don’t know what is. But alas, the real conceit of the Hell House lies in the big reveal: the lights come back on and the proselytizing begins. Visitors are preached to, given their “Get out of Hell Free” cards, and then they leave, getting to keep the residual effect of their thrill without having to feel tainted by it.

I was surprised to find myself thinking about hell houses toward the last half of Fifty Shades of Grey. Here, after all, is the sexual pop-culture event of the decade on the big screen, a diving point into the fascinating world of kink for curious mommies and former Twi-hards everywhere. And, up until this point, they’ve actually done a decent a job of sprucing up the source material.

Naïve-beyond-belief college senior Anastasia Steele (Dakota Johnson) drives out of her comfort zone and into Seattle to interview mysterious young billionaire Christian Grey (Jamie Dornan) for her school newspaper. Her initial fumbling draws out Grey’s steely-eyed fascination, whose behavior toward her seems equal parts paternal and predatorial. After a few subsequent and “coincidental” run-ins, the central affair begins, with Grey presiding over Anastasia’s sexual awakening and skirting ever-so-tentatively around his final aims. These aims take the form of the film’s third most important character, a curious bedroom contract which will define the “limits” and “restraints” of a new stage in the couple’s relationship. Anastasia’s future with Grey (and the fulfillment of the audience’s curiosity) depends upon her signing this contract. A traditional kind of love, it seems, is out of the question.

In the first half, the film is surprisingly atmospheric in its use of austere (but often steamy) Northwestern cityscapes and dim, intimate interiors. Anastasia begins to dip her toes in the particulars of Christian’s power play, but save for some fashion-shoot grade nudity (think Abercrombie and Fitch) and some “naughty” elements (blindfolding, riding crops) the story proceeds as a traditional romance. Scenes of Grey driving Anastasia around the countryside or whisking her away in his helicopter seem almost quaint for a film that campaigned specifically on its scandal factor. But up until now, one can’t really judge— Fifty Shades is catering to a general, not a jaded audience—this is kink for the matinee crowd. 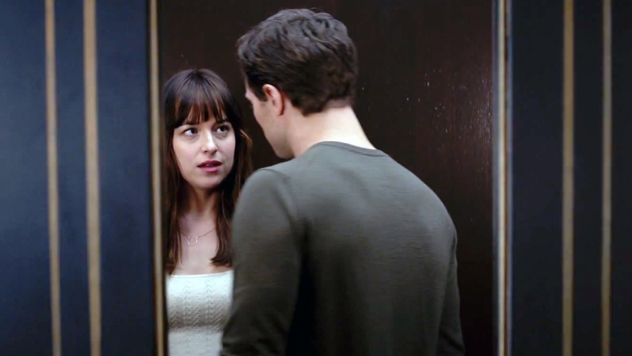 But somewhere along the line, the film begins to lose its nerve, which brings me to the disappointing Hell House moment. It does not come on suddenly, but as a gradual, cruel realization. Anastasia is infatuated with every aspect of Grey—his wealth, his prowess, his attentiveness—except the one that defines him. She probes at the source of his unusual proclivities with a good deal more concern than acceptance. Instead of venturing into “the dark side” (and taking the audience along), she begins to play amateur psychologist. Perhaps there’s something wrong with Grey that she can “fix”; perhaps something childhood-related (hint: there is)! So much for Anastasia being the victim, as many critics have claimed.

So there it is, the true offense of this so-called daring film. Dominance/submissiveness is portrayed as an intriguing yet mostly unnatural disorder representing a roadblock to true love. While the road we’ve gone down in the film is nowhere near as shocking as a Hell House, the basics are the same. Fifty Shades peeks behind the curtain at a sexual subculture, flirts with the daring aspects, paints a romantic portrait, and when the time comes, turns on the cold shower and points a finger at the participants. We end on the most embarrassing emotional cliffhanger since the end of Atlas Shrugged Part 1: Will Anastasia be able to salvage Grey’s damaged goods? Will Grey finally clean up his act and become dad material for Anastasia? Will the “Red Room of Pain” get a new pastel paint job and become the baby’s room? Frankly, at this point, I don’t care. I’ve got to get the taste of vanilla out of my mouth.

At least we can enjoy the unique light Fifty Shades is shedding on current American society. Who would have thought we’d have a film in 2015 that has both evangelicals AND progressives whipped up in an indignant furor! If only the material was as worthily outrageous—then we’d have something to talk about.