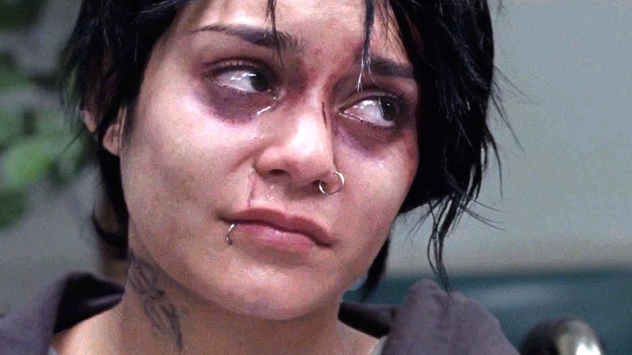 It’s nice to see a teen star trying to mature without going on a drinking binge. High School Musical’s Vanessa Hudgens tries to make a segue into more of an adult role with her portrayal of 16-year-old Agnes “Apple” Bailey in Gimme Shelter, a film that takes a good, hard look at teenage pregnancy and life in America’s foster care system. While the film is loaded with good intentions—especially Hudgens’ performance—it falls short of having any lasting dramatic impact.

Based on a true story, the film opens with a haggard Bailey chopping off her own hair in a grimy sink. It would appear that she’s hit rock bottom. Living with an abusive mother in an oppressive ghetto, Bailey decides it’s time to finally flee. She makes her way to an affluent suburb in New Jersey in search of Tom Fitzpatrick (Brendan Fraser), who turns out to be the young woman’s absentee birth father.

In a complete 180 from Bailey’s life at home, Fitzpatrick is a Wall Street tycoon. He lives in an opulent gated home and is married to a perfect wife Joanna (Stephanie Szostak) with whom he has two children (one boy and one girl, of course). Reluctantly, Tom and Joanna decide to take in Apple, though at this point in the film she has the dark under-eye circles and complexion of a recovering heroin addict. However, Apple’s mood swings are pretty severe, and when she starts suffering from morning nausea, it is revealed that the young woman is pregnant.

Tom and Joanna think it’s best for Apple to get an abortion, but the 16-year-old momma to be is not so sure. She flees from an abortion clinic and ends up wandering the rough streets of Newark, N.J., where she forages the garbage for food and sleeps in unlocked cars. After narrowly escaping abduction, she befalls a serious car accident that lands her in the hospital where she meets up with a preacher (James Earl Jones), who starts her down a path toward turning her life around. 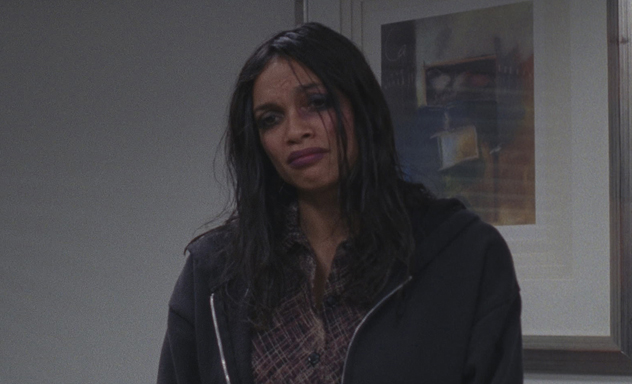 There are a lot of good feelings circulating around this movie. Each character gets a shot at redemption, though the only one who squanders her chance, Apple’s mother June (Rosario Dawson looking as frightening as Cruella de Vil). Hudgens and Dawson share a touching scene at the hospital after Apple’s accident wherein the mother makes a plea to her daughter to return home. Dawson, as she does throughout the film, manages to make her vile character somewhat sympathetic. At the hospital, she paints a portrait of someone who once had dreams and aspirations but was eventually beaten down by life and was unable to rise out of the ashes.

Elsewhere, though Tom seems to turn his back—once again—on his daughter Apple, he never gives up his search for her, and the two are eventually reunited with a chance to forge a real relationship.

Apple, too, starts as a hateful young woman—understandably. She’s been swept aside by her parents and fell through the cracks of the social welfare system. It’s a painstaking process, but as the film progresses she learns she has to let down her guard and try to trust people. Hudgens does a so-so job of taking us through this progression. Unfortunately, her cosmetic changes—from grungy street kid to cheery girl-next-door-type—are more noticeable than her growth as a character.

What’s nice about the film is that it doesn’t ever get too preachy. Though it contains themes such as teenage pregnancy, abortion and social welfare, it never seems to take a Pro Life or Pro Choice stance. It simply portrays characters that struggle with serious life choices. It pokes around at the inadequacies of “the system” without really pontificating. It’s nice not to feel like we’re being lectured to, but at the same time, any kind of stance would have at least been interesting (whether I agreed with it or not).

Dawson is the only principal player who really distinguishes herself. Though she’s somewhat cartoon-y as the film’s villain, she can be chilling at times, especially when she attacks Hudgens with a razor blade in one scene at a church. Fraser, whom I don’t remember seeing in a film in quite some time, lacks charm and just mopes around with furrowed brow. Hudgens really goes for it, though. She looks a mess and acts one, too. She ebbs from fiery to devious to vulnerable, but overall she seems like she’s trying too hard to assert herself as a “serious” actor (whatever that means). Definitely an A for effort…maybe next time.