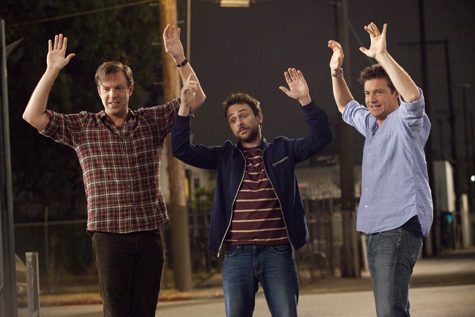 Amid the giant robots, British wizards and buff super heroes, this past weekend Warner Bros. injected some much-needed laughs into what has been a pretty ho-hum summer movie season so far (with the exception of Cars 2). Horrible Bosses may not carry with it gargantuan effects or titanic (pun intended) budgets, but its girth does come in the way of a talented ensemble cast who seemed to have free rein to do as it pleased with mostly positive results.

Horrible Bosses starts as sort of a ballad for the modern-day working stiff as the film’s three heroes: Nick Hendricks (Jason Bateman), a businessman on the verge of a big promotion; Kurt Buckman (Jason Sudeikis), an accountant at a chemical company; and Dale Arbus (Charlie Day), a dentist assistant madly in love with his fiancÃ©e, bemoan their lots in life. Nick’s boss, Dave Harken (Kevin Spacey), is an utter sadist, while Dale is tormented by his superior, Dr. Julia Harris (Jennifer Aniston), who incessantly tries to get in his pants. Kurt loves his job, and his boss (played by the venerable and distinguished Donald Sutherland), but his boss’ son, Bobby Pellitt (Colin Farrell) is, for lack of a better term, a complete douchebag. As pressures mount and their situations worsen, Nick, Kurt and Dale find that they have no other recourse than to kill their bosses–perhaps the most justifiable form of homicide.

Things don’t go as planned, of course, because this is a comedy, and a solid one at that. Horrible Bosses is proof that a simple premise can be very successful with deft execution. The plot, at times, takes a back seat to the banter, which usually isn’t a problem as Sudeikis, Bateman and Day are in strong form. Sudeikis, especially, is a real treat as an unlikely lady killer, while Bateman fills a more comfortable role as the straight-faced, albeit slightly off-kilter, voice of reason. Day pretty much reprises his most notable role of Charlie from It’s Always Sunny in Philadelphia, but hey, if it ain’t broke… Their witty repartee is the engine that drives Horrible Bosses and may be mostly pointless as far as the actual story is concerned, but when it hits, as it often does, it’s so good that it hardly matters.

Not to be outdone, the trio’s all-star supporting cast delivers fine moments in their own right. Farrell is mostly a visual gag, but a good one, and Aniston has her share of scene-stealing moments (even with her clothes on), delivering some of the film’s raunchiest humor. Spacey can be over the top in his role of the archetypical evil boss, but he can also be downright devious–a perfect villain who makes you feel dirty when you’re laughing with him. Jamie Foxx (Motherfucker Jones) also shows well as the trio’s murder consultant.

With the loose feel of the script, the film really sinks or swims on the banter. Luckily, in such capable hands, Horrible Bosses never gets lost at sea. Sometimes, however, such as how Foxx’s character got his remarkable nickname, the punch line isn’t worth all the jibber-jabbering it takes to set it up. There are also some strangely poignant moments too, such as one scene in a bar where Nick, Kurt and Dale are faced with the various conundrums of what keeps people shackled to their shitty jobs in the first place: mounting bills, pride and stubbornness or the fear that you’ll have to repeat the whole wretched cycle of starting at the bottom if you go somewhere else. Despite a few minor shortcomings, Horrible Bosses has more than enough summer-sized comedic firepower to stimulate your funny bone while you wait to see what happens to that other wizardly trio in their battle against an evil, whose very name I fear to type.