Battle of the Beanstalk 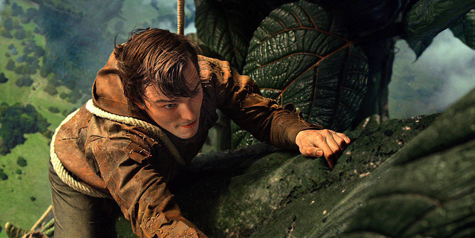 There has been a spate of fairytale-themed movies lately. The Oscar-nominated Snow White and the Huntsman and the more recent Hansel and Gretel: Witch Hunters immediately come to mind, but there have been plenty others the past few years. Maybe it’s the popularity of ABC’s primetime show Once Upon a Time, or more likely, it’s because you don’t have to pay any royalties for public domain characters. Whatever the case is, I’m all for it. These stories have been around for a long time for a reason. They’ve been passed down for generations. Still, with each new telling, the stories get a new makeover. Jack the Giant Slayer come to us via over by X-Men director Bryan Singer, and though the film had a rough opening week at the box office and has received lukewarm reviews, I thought it was a hell of a good time, and a worthy retelling of Jack’s journey up the beanstalk.

It more or less starts as the familiar tale of Jack (Nicholas Hoult), a wide-eyed farm boy with big dreams who’s slow on making the transition from boy to man. A monk trades beans soaked in dark magic for Jack’s horse, and the young man’s life is never the same again. The beans get wet, a giant beanstalk grows and our young hero is transported into a land of giants who like to think of humans as things you can roll into pastries and snack on.

There are some wrinkles added to the well-worn tale, though. Stanley Tucci plays Roderick, an evil usurper with his eyes on the throne; Ewan McGregor chips in as Elmont, the dutiful captain of the king’s guard; and what fairytale would be complete without a princess? Eleanor Tomlinson stars as Isabelle, a headstrong and idealistic young woman who would be queen—and a darn good one too—if she ever gets her shit together. 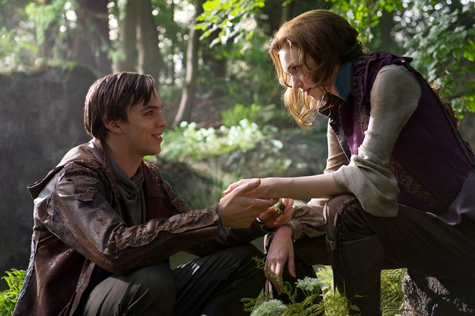 When Isabelle leaves home so she won’t have to marry the much older Roderick, she meets up with Jack, who’d previously stood up for her honor outside the castle. Their flirtations are cut short when one of Jack’s magic beans gets wet and, a la Gremlins, completely freaks out and sprouts a leafy green staircase to the heavens. Isabelle gets captured by the giants’ two-headed leader (voiced by Bill Nighy and John Kassir), and Jack ends up a part of the expedition to go rescue her.

The one problem with Jack the Giant Slayer that makes the film a difficult study is that it doesn’t seem to know which audience it wants. There’s plenty of childish humor (some of which is pretty funny), but there are also a few scenes of intense fantasy violence. Though you won’t see blood and guts all over the place, there are instances of people and horses getting buffeted, stepped on or skewered. More timid parents may want to steer younger children clear.

However, for the teens—and the teens at heart—there’s a whole lot of fun to be had in Jack the Giant Slayer. A cast of capable actors bring this classic story to vibrant life, and the CGI monster designs are wickedly fun.

There is also a giant (no pun intended) battle scene that is actually quite thrilling. As the giants storm the humans’ castle, the danger is palpable. Moats are set on fire, enormous hammers and boulders crash into castle walls and soldiers struggle under impossible odds. While you may roll your eyes at the epilogue (as I did), the action-packed ride to the finish is definitely worth the price of admission.

Look, there are swashbuckling heroes, a beautiful princess and a horde of unruly monsters threatening to flatten all of humanity. You may very well be too grown up for a movie like this. And if you are, I feel kind of sorry for you.