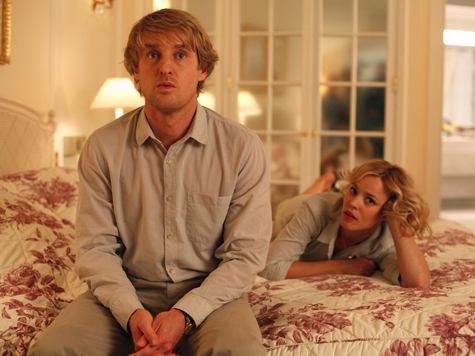 As far as body of work goes, Woody Allen is a titan among American filmmakers. While his films may not have the epic scope of a Coppola or the box office clout of a Spielberg, Allen’s pantheon is no less impressive, running the gamut of modes from the Greek chorus-inspired Deconstructing Harry to the tongue-in-cheek comedy of Mighty Aphrodite to the bone-chilling Match Point. Allen’s latest film, Midnight in Paris, is more of a return to form than the latter, but is also exceedingly clever and entertaining.

Like most things, nostalgia can be harmful if done in excess. It’s easy to pine for a time long gone, because the mind has a funny way of accentuating the positive and repressing the negative. In Midnight in Paris, Gil (Owen Wilson) is nostalgic for a time he’s never even experienced. He yearns for the Paris of the ‘20s, a place and time he believes was a Golden Age. Gil, a successful Hollywood screenwriter, is visiting Paris with his fiancÃ©e (Inez, played by Rachel McAdams) and her wealthy family, abroad on business. Inez’s parents–a far right-wing businessman father and snooty mother–may not necessarily approve of Gil, but they tolerate him, mainly because he makes a good living; but Gil’s soon-to-be wife and in-laws all seem to spurn the writer’s more whimsical side.

Gil is in love with Paris, but his wife and his family can’t wait to get back to the States. He sees it as a magical place, where his literary heroes came to sharpen their skills and tap into the city’s undeniable energy. While in Paris, Gil is trying to become a “real writer” by working on a novel about a man who runs a nostalgia store, but refuses to show it to anyone. After a night of wine tasting with Inez’s pedantic friends, Gil is pixy-led through the streets of Paris. As the clock strikes midnight, he becomes a man out of time, swept back to the ‘20s where he meets giants of the literary and art worlds–Hemmingway, Fitzgerald, Dali and more. While straddling two times, he becomes infatuated with a young would-be costume designer (Adriana, played by Marion Cotillard). 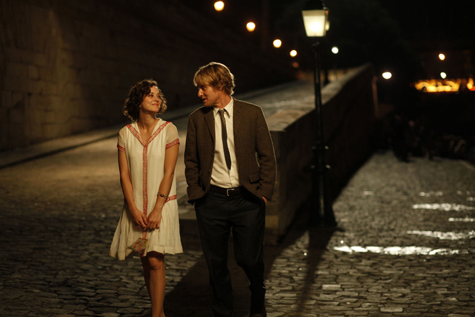 First and foremost, Midnight in Paris is a wonderfully entertaining film. It feels light, but has a richness to it if you care to soak in it. Allen weaves in numerous great writers, artists and luminaries of the ‘20s in a clever way, incorporating their work, personalities and biographies into the mix. Hemmingway is a drunk obsessed with masculinity; Fitzgerald and his wife Zelda have a tumultuous relationship; Dali is, well, Dali (wonderfully portrayed by Adrien Brody). Well-read audience members are sure to share many knowing chuckles, but Midnight in Paris never feels in-joke-y or exclusionary. It’s as breezy as any daft romantic comedy, and that’s refreshing.

The performances are solid throughout. Owen Wilson, as de facto stand-in for Allen, awkwardly mumbles and fusses in the very image of his director. Kathy Bates delivers some of the film’s most powerful lines as Gertrude Stein and exudes a firm, statuesque presence befitting of her real-life counterpart, and Corey Stoll casts Hemmingway as the brawling caricature you’ve no doubt learned about in high school. Overall, it’s an excellent ensemble cast.

As light-hearted as it feels, Midnight in Paris also throws a heavy warning about living in the past. As Gil lives the good life in the Roaring Twenties, his real life begins to crumble (which is perhaps for the best). Unlike the breezy romantic comedies it seems to emulate, Midnight in Paris doesn’t come to an entirely tidy conclusion, much to its credit. Certainly, this film is a welcome addition to Allen’s canon.