THE MIRROR GAZES INTO ITSELF

To quote a fellow critic, the characters in Alex Ross Perry’s terse new study in human relation, Queen of Earth, are “privileged, self-obsessed and unsympathetic.” This is merely a starting point. All of the auxiliary flourishes are merely variations on this theme. It is well-studied in its influences, aiming to capture the pointless cruelties of early Polanski and the agonizing impersonality of Antonioni; there is a palpable effort in Queen to evoke a bygone style or mood, with many clear nods of appreciation to other works to keep many a cinephile busy. But resting uneasily in this faux-dated, satin-lined frame is a clunky mumblecore plot populated by smug Gen-Y Americans, adrift in questionable dialogue and ersatz wit. Is the average foreign ‘60s arthouse film any better? Arguably not, but in the absence of real cultural and temporal distance, we are left chillingly sober and painfully aware of the rough edges. Those of us that can get wrapped up in the formalities of performance and representation will appreciate this exercise, but for others, an exercise is all it will be.

Elisabeth Moss (of Mad Men fame) is Catherine, a woman in crisis and the “queen” referenced in the title. We are introduced to her as the film opens, in the wake of her father’s suicide and just as her long-term boyfriend rejects her. It marks the beginning of her character’s spiral toward a psychotic break, as she struggles to cope with the depth of human grief that her life-long codependency has shielded her from.

Catherine retreats to upstate New York to spend time with her closest friend, Virginia (Katherine Waterston), who lives rent-free at her family’s upscale lake house. It is clear the two have grown distant; regular flashbacks to a similar trip one year prior show a poisonous dynamic, with a then-happy Catherine invested solely in her boyfriend and emotionally oblivious to Virginia’s own crisis. This year, the tables have turned, and the two women settle in for a week of poorly concealed spite and growing tension.

The overall effect of the tight close-ups, cryptic expressions and brooding score that round out the rest of the film is that of an ‘80s slasher film married with the melodrama of ‘70s Italian giallo. The atmosphere is overwhelmingly indulgent, the characters more believable as archetypes than as rational agents, and the overall reverence for bygone cinematic tropes tends to push even the most earnest scenes into luminous quotation marks; in one sequence, Catherine keeps an uneaten salad next to her bed that Virginia had made for her, initially a sign of suspicion between two former friends, and eventually a (quite literal) symbol of a decaying friendship. This device mirrors one used in Polanski’s timeless psychodrama Repulsion (1965), where a roast rabbit was used to the same effect. But what made the earlier film gruesome, intense and personal, makes this one ironic and unsubstantial—a mere formality. 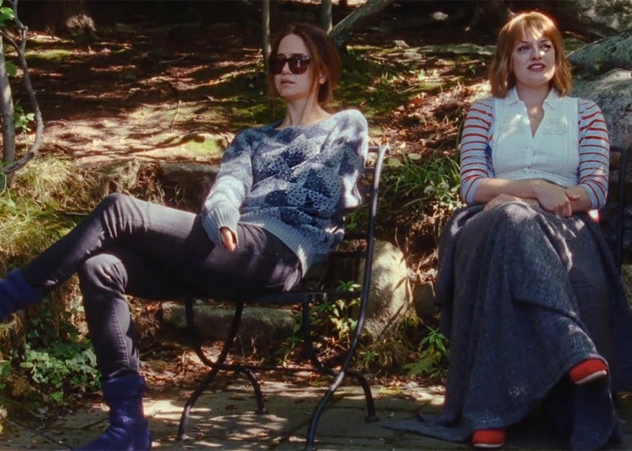 Queen of Earth is often more compelling in moments of expectation than of revelation. Virginia’s boyfriend, Rich (perhaps a play on the cardinal sin and primary characteristic of the film’s characters) is a mocking presence (played by Patrick Fugit), showing up now and again to take attention away from Catherine and give her disdainful, impish looks. The whole of the film feels like a buildup to her violent retaliation against these two unsympathetic presences. Adding to this impression is the film’s method of marking the days of the week in flowering, blood-red script between scenes. Has this device ever been used in a film for anything else than to foreshadow an atrocity?

Moss’ portrayal of eroding sanity is oftentimes rewarding, but never quite rings 100 percent true. I had to rewatch the opening scene twice to determine whether her character was really arguing with her boyfriend, or whether she was an actress doing a read-through of a scene with the help of her best friend. I believe this is more a fault of the script than anything else, which blends into the film about as well as a fistful of eggshells in an omelet.

As of now, there is an eerie consensus by critics that this film marks another triumph by a budding auteur. A triumph it is, perhaps—a triumph in aim, but not in execution. The themes—depression, insanity, passive-aggression, ennui, and loathing—as they are played with here, do not suggest the same reservoir of emotional experience that is readily evident, in say, a Lars von Trier film. While this film is sure to find its audience (it is currently being distributed by IFC), for the majority of viewers, this is not a picture that will make you want to smoke after watching. It’s one you’ll want a smoke to get through.