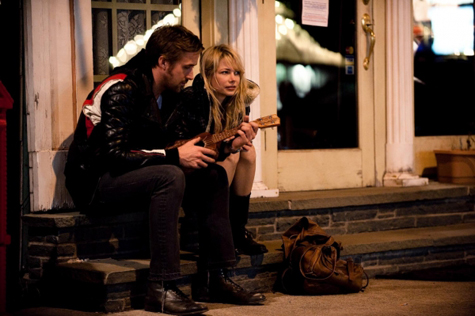 Love, like any other volatile emotion, doesn’t always end well. What starts out with the best of intentions can come crashing down. The fragility of love is explored in Derek Cianfrance’s breakout film, Blue Valentine. Much like the emotion it delves deep into, the film itself gets messy.

The story introduces us to Dean (Ryan Gosling) and Cindy (Michelle Williams). When we first meet them, they are married with a beautiful young daughter. Their marriage seems stuck in perpetual malaise. The two love their daughter, but their love for one another seems more one-sided: Dean is still effusive in his praise for his wife, but she appears less than thrilled with her complacent–though doting–husband. After Cindy finds the family dog on the side of a road, struck dead by a car, the story flashes back to when the couple first met. Dean, a young drifter and a Floridian native, lives in Brooklyn. He doesn’t have much education, but is hopeful, idealistic and cheerful. He gets a job with a moving company. When the job sends him to an old-age home in Pennsylvania to move in a tenant, he meets Cindy, who is there visiting her grandmother. The story flashes back and forth between the optimistic past and the harsh present.

Co-writer/director Cianfrance paints a very stark picture of an ideally romantic relationship gone awry. Wonderful cinematography from Andrij Parekh has an extreme intimacy that borders on perverse. Blue Valentine is as up close and personal as a film gets, for better or worse. An iconic scene from the past–as Dean awkwardly serenades Cindy with his goofy voice and ukulele–is vividly contrasted with Dean’s climactic doctor’s office freakout in the present. The viewer is in the story, and will often feel the need to escape. Even the film’s sex scenes are portrayed with such closeness that it’s impossible not to feel voyeuristic, even intrusive.

Blue Valentine also benefits from wonderful performances from its two leads. Gosling and Williams show that they are two of the finest young actors working in or out of Hollywood with such visceral and contemporary performances.

Unfortunately, there is a good deal of disconnect in Blue Valentine. The film lacks a bridge between the positivity of the past and then negativity of the present. We see how the lovers meet and fall in love–though even that feels as rushed and thrown together as their “shotgun” wedding–and the moment it comes crashing down; however, the middle is sorely missing.

Perhaps that’s what Cianfrance was trying to do. But in so doing, he makes cruel generalities. Is this how all relationships end, or just this one? He also perpetuates the stereotypical inconstancy of women with his casting of Cindy as the out-of-love wife who has grown cold and perhaps bored of her husband’s seemingly well-meaning romantic inclinations. In the past, Dean says to one of his coworkers, “I feel like men are more romantic than women.Â  When we get married, we marry one girl.Â ‘Cause we’re resistant the whole way until we meet one girl and we think I’d be an idiot if I didn’t marry this girl. She’s so great.Â But it seems like girls get to a place where they just kind of pick the best option or something.Â I know girls that married they’re like, ‘Oh he’s got a good job.’Â I mean they spend their whole life looking for Prince Charming and then they marry the guy who’s got a good job and is going to stick around.”

Dean might be to blame for this–perhaps it’s his drinking and smoking, his receding hairline and the squandering of his “potential”–but Cianfrance’s ire seems focused squarely on Cindy. Fair or not, it’s only natural that someone takes the blame when love goes to shit. Still, this “he said, he said” sort of argument holds Blue Valentine back from being a truly great film and diminishes its otherwise strong emotional impact.