May is Bike Month is back, challenging all to abandon four wheels for the environmentally friendly alternative of pedal power, (which means riding bicycles versus gas guzzlers…keep up!). With miles logged and events listed, there’s still one more idea to add to this sunny month’s itinerary: the annual Submerge Bicycle Mural Tour. For three years now, we’ve scouted the entire Midtown and downtown areas looking for eye-catching artwork decorating businesses, like HR Sports Cards and Collectibles (2231 10th Street) and even discovered a growing number of collaborative art murals brightening up dingy alleyways. Grab a date, some friends or all of the above and visit each location to see the work of artists such as Shaun Burner, Mike Rodriguez, the women of the Few&Far movement and many who prefer to remain nameless. This year, I’ve included some bonus murals for all participants to find along the way. Plus, the routes are near many local businesses to turn a tour of alluring wall art into an all-day affair that ends near the Sutter’s Landing river entrance on B Street. Will you spot the lion’s head with a multi-colored headdress, or perhaps successfully stumble upon the woman underneath the moon? Pedal forth, keep an eye out and most of all ride safe. 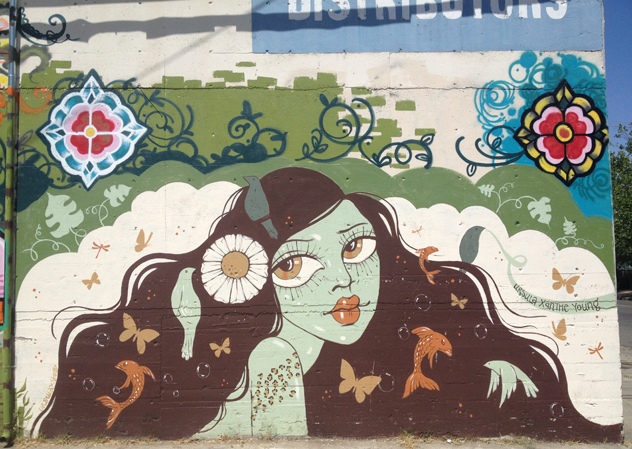 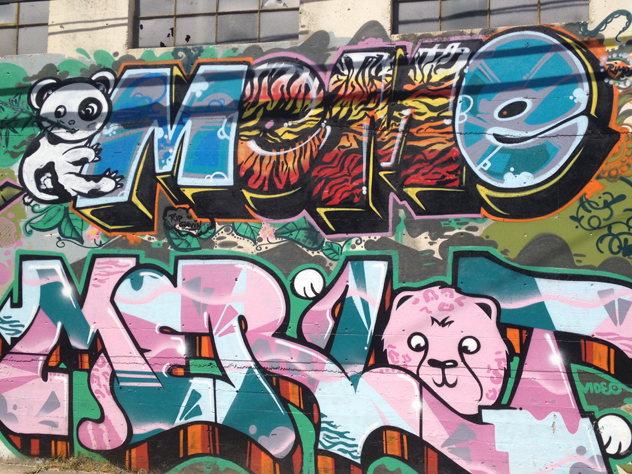 This marks the beginning of this two-wheeled journey. It appears that Sacramento’s alleyways, once dark and desolate locations, reeking of piss, have now transformed into a sort of new wave art exhibit. Who knew a splash of color and a concept could turn an industrial building with broken windows (1800 24th Street alleyway) and rusted fans into a tribute to all the cute, furry creatures of the world? Last September all day and throughout the night the Few&Far movement, a group of women all experienced in graffiti art joined together for animal rights. See doe-eyed giraffes, pink leopards and even a brown-eyed girl with butterflies, birds and daisies decorating her flowing locks. The mural is the collaboration effort of over a dozen artists from all around the world and yes, even Sacramento. Get involved at http://fewandfarwomen.com/. 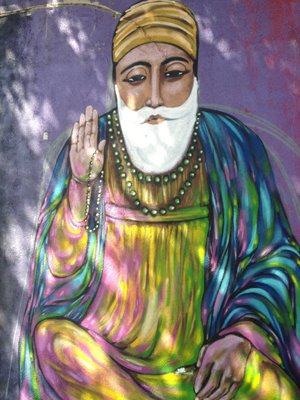 Members of the Kids Crew warn passersby that this wall, the second destination of the tour, is a “mural in progress.” The mural displays six gods of various religions—representing everything from Shiva, a Hindu deity, to Sikh and even Buddha. Each god is depicted in various colors and holds unique distinctions like the Koran or lotuses scattered below one figure, the lotus flower being a symbol of purity and enlightenment. What better way to bring peace to a neighborhood where according to manager of HR Sports Cards and Collectibles (2321 10th Street on W Street), Parker, is an unfortunate hot spot for tagging. “We have this mural because it protects the building from getting tagged,” he says. “Here, even the taggers respect mural art. It’s a really nice work of art and it gets so much attention.” Parker explains his interpretation of the mural as a call for all to coexist peacefully within all religions. After sifting through a box of comics—it was Free Comic Book Day after all—he then offered a little insight to what became two bonus stops on the tour. 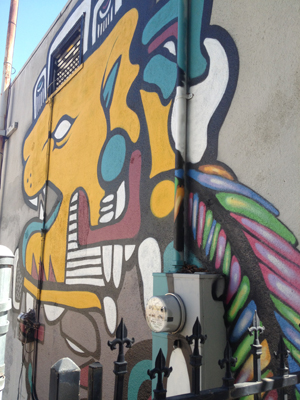 Head up 10th Street just past the comic book shop where a Mayan-inspired lion’s head with multicolored headdress growls from the top corner of a gray building, protected by fencing. Spot the lion and pedal forward.

Bonus find: Woman Beneath the Moon
W and 10th streets

Just before reaching Osaka Ya (2215 10th Street) a downtown joint known for their enormous shaved ice treats and mochi. Turn right into the alley to spot the second bonus find on this year’s mural tour painted by artists Shaun Burner and friend Rubio. A solemn-faced woman with golden eyes stares into the alleyway, two male figures on either side of her raise their hands to a white moon at the peak of this decorated garage.

“I painted the outer sides with the two figures giving it up to the heavens praising the sacred feminine,” says Burner. “They are just giving up blessing to the universe. The sacred feminine has been so lost and disrespected at this point in time.”

Behind the Crest Theatre (1013 K Street) is an alleyway. And, along the walls of this alleyway is an astronaut floating through a space of vibrant blues, magentas and various shades of greens. The mural, painted by Jason Bove and various artists, extends halfway through the entire stretch of building lining the alley and ends with all the colors of the rainbow dripping in succession from rooftop to pavement.

The Showplace of Sacramento
25th between J and K streets

A boy dressed in ‘30s-style knickerbockers and suspenders gazes into the past of Sacramento’s historic Alhambra Theatre, demolished in 1973 to make way for a Safeway supermarket. Even though all that remains of this historic building is the original fountain still working at the south side of the parking lot, this mural on 25th between J and K streets, with its complementary blues and oranges will forever be a window to the past. 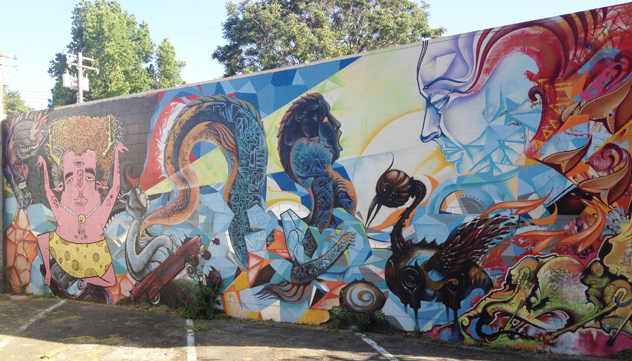 Starting the tour at W Street and ending at the Contemporary Dance Conservatory (213 26th Street) is perfect for two reasons, one being the mural at the entrance of the building painted by Mike Rodriguez, Shaun Burner, Letter D, Miguel Perez, Stephen V. Williams and Mark Prick. And secondly, it’s next to the Sutter’s Landing river entrance on B Street. Owners of this building grew tired of painting over tagged walls, so they invited a few good artists to hold a freestyle session using their dance studio as the canvas. Neighbor to the studio, Evan Duran, brought the collaboration together, “People respect art. If there’s already art on the wall, they won’t tag on it. But if it’s a blank canvas such as a buff building, it’s pretty much just asking kids to paint on it,” he says. The mural portrays a young figure riding in a car at the edge of a cliff; a shaman-like character to his right holds a key in one hand and blesses him with vision from a heart as the young figure faces the obstacles in front of him.