A Family of Artists in One Gallery 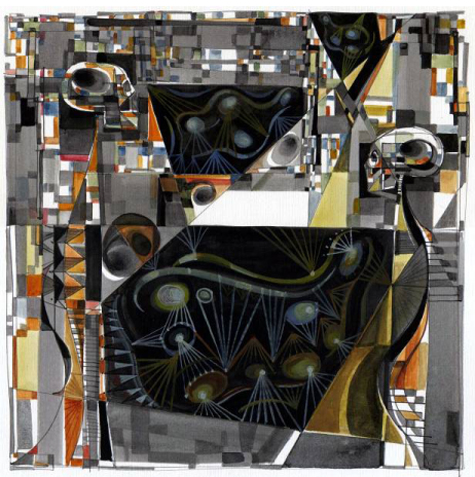 Brickhouse Gallery’s current exhibition is a bit of a special one. The father, son, daughter trio of Fernando, Benjamin and Veronica Duarte are all showing their artwork under one roof. Submerge featured the brilliant abstract, surreal and dadaist artwork of Fernando Duarte years ago, so when we got word his kids were artists too and they were all showing together, we knew we had to shine a light on this exhibit. When asked if his kids always showed interests in the arts, Fernando responded with, “Yes, both. Benjamin always played with 3-D stuff, paper cutouts, models, etc., and Veronica with drawings and paintings.” Veronica, now 23, moved to Brooklyn, N.Y., when she was 18 to attend Pratt Institute where she fell in love with printmaking. In this show she has experimented with etchings, lithographs, linocuts and woodcuts. Benjamin, now 24, also moved to Brooklyn when he was 18 to attend Pratt Institute, only he turned toward architecture. In his artist statement, Benjamin says, “Since moving to New York City from the suburb of Davis at the age of 18 in 2004, I continuously grow without notice into a more powerful individual. This is because I have been automatically and unwillingly absorbing the present life from the place where I reside. The greatest reward in this city is the opportunity to be more deeply connected to it, by creating something and placing it in its history.” The exhibit, which features about 40 total pieces between the three artists, will be viewable until April 30 at Brickhouse Gallery, located at 2837 36th Street. On April 28, 2011 there will be a closing reception from 6 p.m. to 9 p.m.