Sculptor Al Farrow Explores the Intersection of War and Religion

Due to the subject matter of this story, during my research I couldn’t help but Google places that have recently endured mass violence.

I also checked local news, though nothing at such scale happened on this particular day. The daily violence involving weapons that did occur, as far as I could tell, was upsetting but unrelated to religious extremism.

This last factor is important in the context of my interview with artist Al Farrow, whose collection, Divine Ammunition: The Sculpture of Al Farrow, graces the Crocker Art Museum through Jan. 3, 2016.

Farrow uses guns and ammunition to create miniature cathedrals, mausoleums, mosques, reliquaries and synagogues. Colorful copper, brass and steel bullets line entrances to sacred spaces, shape domes and create buttresses and minarets in a beautiful but disturbing way. Farrow is a social commentator, and through these pieces, he expresses what he sees as the hypocrisy and dissolution of true religion. 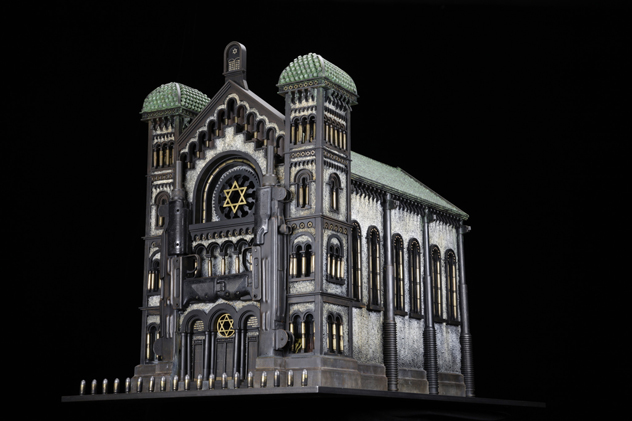 “Everyone sends out their soldiers with blessings, and says God is on their side,” he says. “They give the last rites to their dying. But they don’t prevent them from going out and killing or getting killed. Religion is not preventing what it’s supposed to.”

Farrow grew up in a secular, nonpracticing Jewish household. He says he has noticed the United States has changed from his childhood to today, but his commentary through his art since he began this body of work 15 years ago, has not changed.

“It hasn’t changed at all, since the problems that existed then are still here now, even if they may manifest in Paris instead of New York,” he says. “The idea of war and religion hasn’t shifted at all. When I was a young person, religion wasn’t playing as much of a role in American life, it was more secular.” 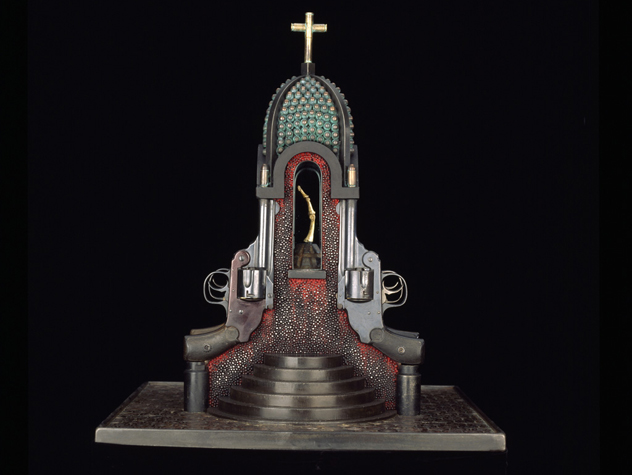 “There has been a real expansion of fundamentalism in all major religions,” he says. “Evangelicals, Jews, Catholics, Muslims—it’s only a handful [from all religions] who are messing it up for the many.”

The 72-year-old architecture-trained artist says he doesn’t have a goal for his art, but a point of view that there “is a relationship to think about” between violence and religion.

“Would people fight over economics and kill each other?” he says. “Somehow religion goes so deep into the human psyche. My hope is that those who see my art will think about this and think, ‘I don’t have to listen to this.’ I hope I can lead them to finding those hypocrisies.”

Farrow started this body of work 15 years ago based off his first experience seeing reliquaries, some containing human bones, in the crypt of the basilica of San Lorenzo in Florence, Italy. He invented his own saint, Santo Guerro, the Saint of War, and chose bones and weaponry as the ironic materials for his social critique.

Farrow explained that “guerro” is not a real word, but a play on the word for war. He noticed in romance languages that “war” is a feminine word, so he masculinized it.

“I didn’t want to insult anyone else so I needed to make up my own saint and it had to be meaningful,” he says of the creation, whose relics lie within Farrow’s Catholic sculptures. 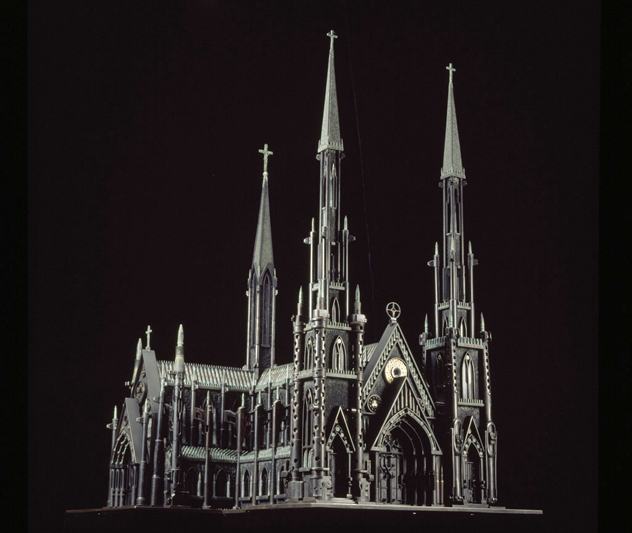 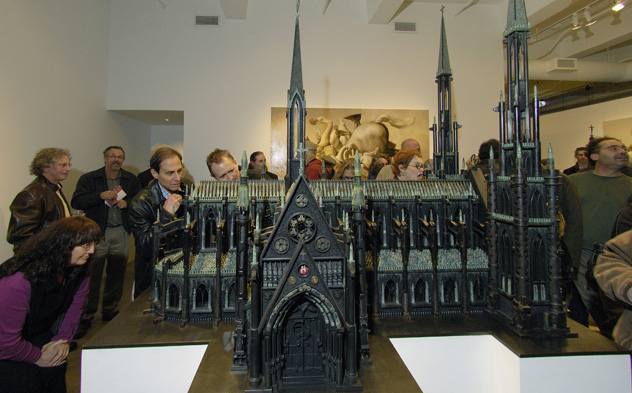 A gothic cathedral at the back of the exhibit, for example, steals the show. Known as The Spine and Tooth of Santa Guerro, Farrow used more than 200 guns and thousands of bullets to build the 1,200-pound sculpture. Its finishing touch is Santo Guerro’s gold tooth.

Farrow later evolved to include other major religions (he said he will eventually incorporate Buddhism), but because they do not have a history of relics, he found other equally meaningful objects.

Inside his synagogues he places Torah covers with the Ten Commandments, making sure the first Commandment, thou shalt not kill, is clearly visible. His synagogues always include Uzi parts, because, he says, “It’s an Israeli gun and I want to make that hypocrisy obvious.”

Farrow notes he has chosen not to place symbolic objects inside his mosque sculptures. 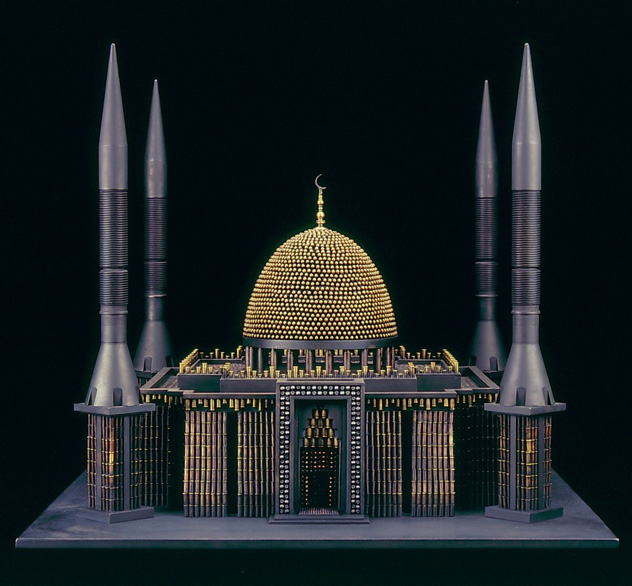 “It’s not that I am afraid, but what I consider approaching with respect,” he says. “It’s in the eye of the beholder and I trust that.”

The changes Farrow has noticed after years of buying, dismantling and reimagining weapons of destruction, are in himself.

“Because I was not a shooter and raised around guns, it had no presence in my life,” he says of first starting out with his concept. “I was at a complete loss as a way to communicate.” 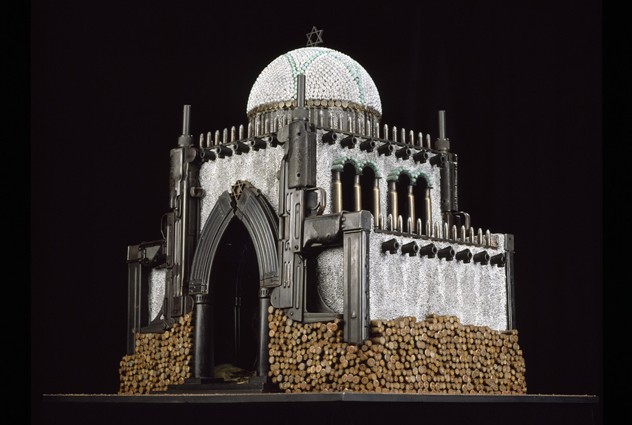 “I am a social commentary artist and anti-war,” he says. “I entered that world with prejudices. I have learned a lot and evolved around the world of guns. I have since learned that the gun world is not just a bunch of violent yahoos. For example, there are collectors and the world of gun collecting is no different than the world of art collecting. They use the same criteria, for example—quality, rarity and prominence.”

Farrow also learned more about the culture around hunting, and the use of guns for law enforcement and protection in a business setting. Despite these more realistic uses, Farrow says he is still adamantly against civilians having assault weapons, and in his ideal world, guns would not be needed.

“I keep telling my wife, I wish they would put me out of business,” he laughs. “That would be the best thing that ever came out of this.”

For now, second best is the conversations he has been able to start through these sculptures.

“It’s intended to disturb to a degree and in that sense, it’s been successful,” he says of the collection. “It gets people into a place where they feel the need to communicate with each other. You can see masterpieces in places all over the world and people will see them in silence and just look for a few seconds.” 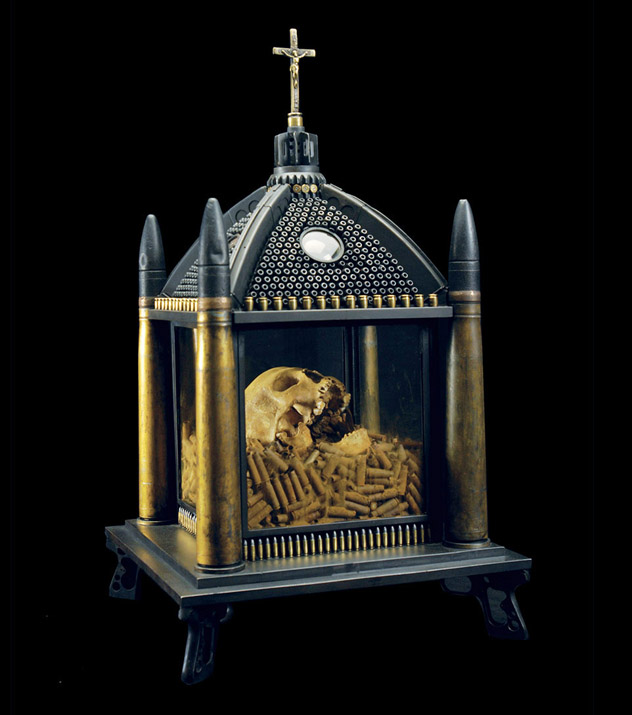