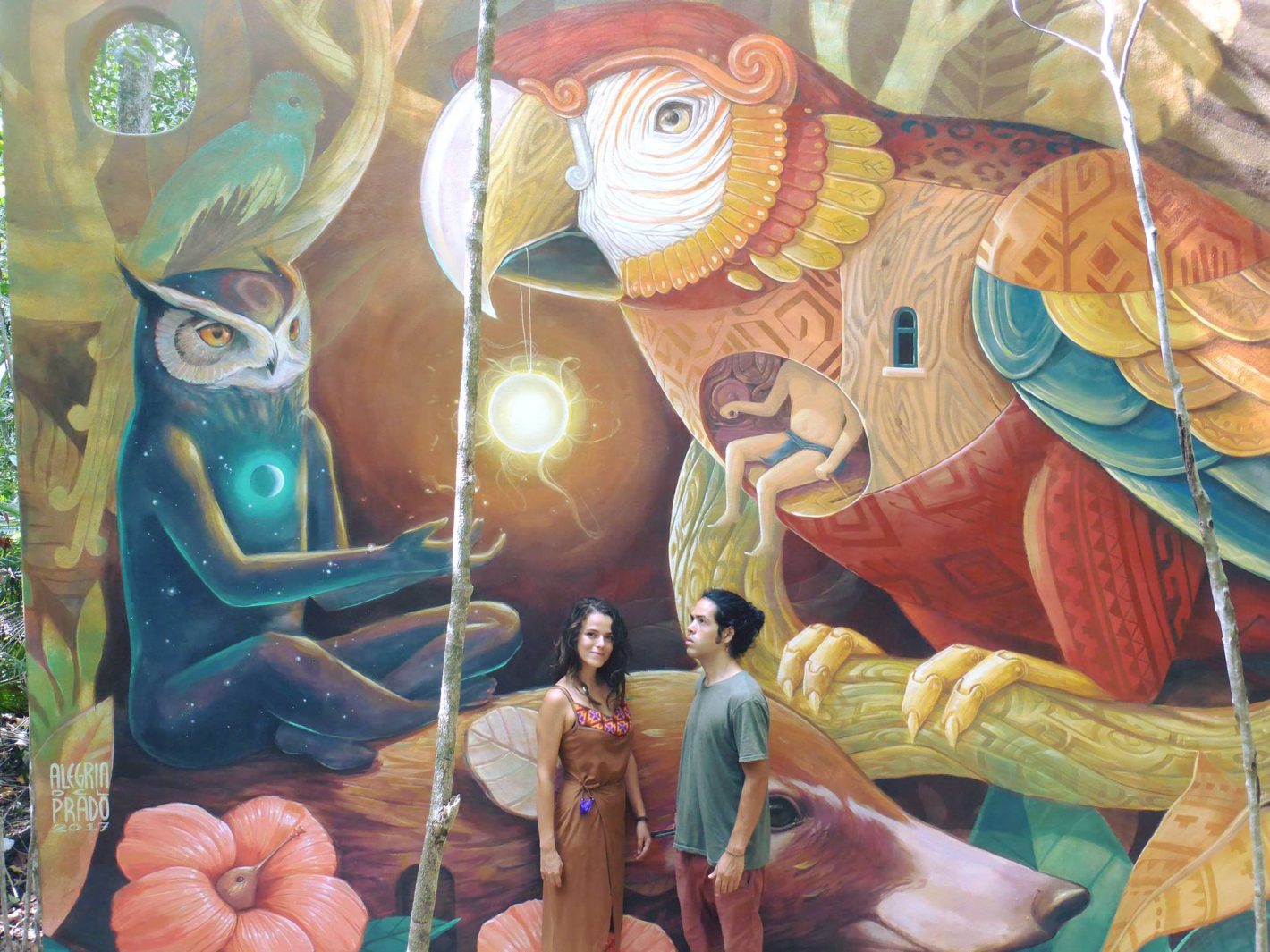 Art is constantly transforming, and the ways in which we can appreciate it are becoming more and more accessible. Street art is a clear example of this, and through all types of creativity, urban art thrives with this powerful notion: Art should be accessible to everyone.

Muralist duo Alegria del Prado is just one example of artists continuing to flip the street art stigma. Esther del Prado hails from Spain, while Octavio Alegria is from Mexico. Their powerful body of work visually guides the public eye out of reality, and takes the viewer on a journey to an alternative perspective—a more fantasy-driven and harmonious perspective. The duo creates their pieces from the perspective that urban art beautifies an area rather than vandalizes it.

“Public spaces are the best way to bring art to any spectator,” said the couple via an email interview with Submerge. “It’s unexpected and timeless. It is the art of the people, and it is very valuable that someone who is not looking for it will find something like it.”

For those unfamiliar, the duo’s creations consist of dream worlds with wide, childlike imagination. Their smooth blending of plants with characters and animals is a direct fusion between nature and the modern world. Their inspiration for content and color palettes lies within the cultures they grew up in and the moments they live.

In 2011, the two began collaborating in Guadalajara, Mexico. Their partnership began while working on a mural, but it eventually transformed into romance. Both were attending university at the time, and del Prado had just arrived through an exchange program. Since their first mural collaboration, painting together has never stopped for the two.

On the subject of what prompted their continuing partnership in painting, the couple defined it as, “The talent of the other, the love, and the desire to learn.”

In a way, their creations are love letters to Mother Earth. Both del Prado and Alegria explained that nature is so deeply invested into their pieces that green thumbs practically flow through their subconscious. Their form of painting can be described as hypnagogic, as it constantly swirls colors into gorgeous illusion.

Their soft, dreamy worlds usually incorporate animals and characters full of symbolism. There is typically a hidden meaning, talent or virtue behind each character portrayed in a piece. The two enjoy using mythological animals such as cats, birds and bears. Cats have been connected to grace, poise and truth during ancient times; birds represent power and freedom; and bears are commonly associated with strength. The houses or windows that appear repeatedly in their work also allude to the home and fraternity all humans share. 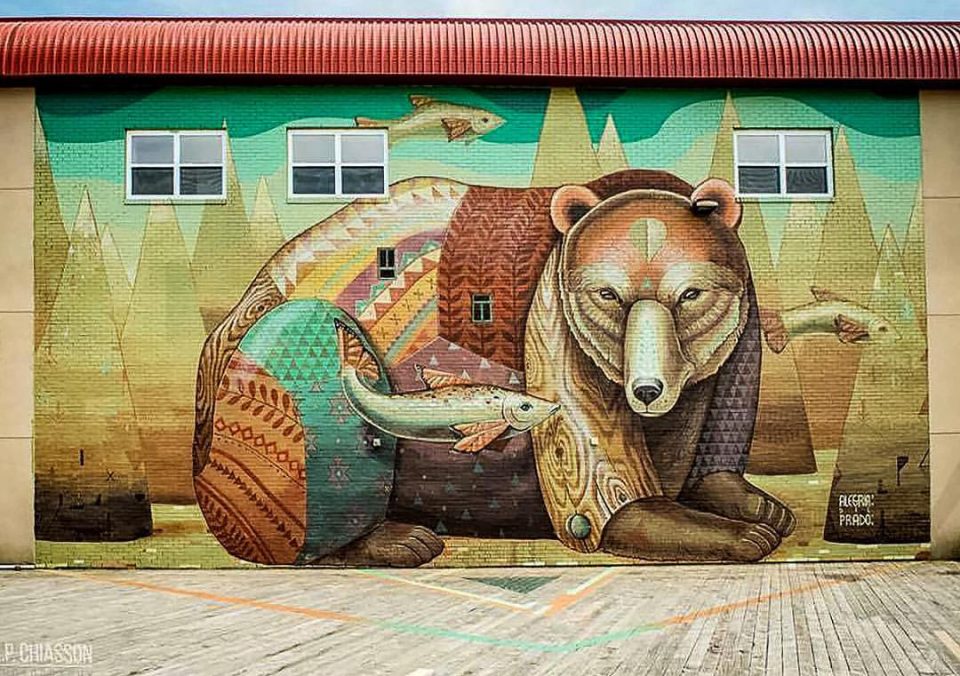 “We like surrealism as a style, mixed with natural elements. It is a way of bringing the basic parts of the natural world closer to the viewer,” the two described. “The art is reminding us that [despite being surrounded by concrete jungles] we still live on a planet that we have to care for and love. With our art, we are trying to give nature the presence and notice in society that it truly deserves.”

Del Prado and Alegria each contribute a personal touch to their work, exposing deeper truths as artists. Over the years, the two have become so in sync with each other, creatively, that they’ve formed a unique and purely collaborative “Alegria del Prado” mode of painting.

The two explained how at the beginning of their partnership, one solely focused on stains while the other focused on textures and drawing. Over time, however, they mimicked techniques and now work equally on all parts. 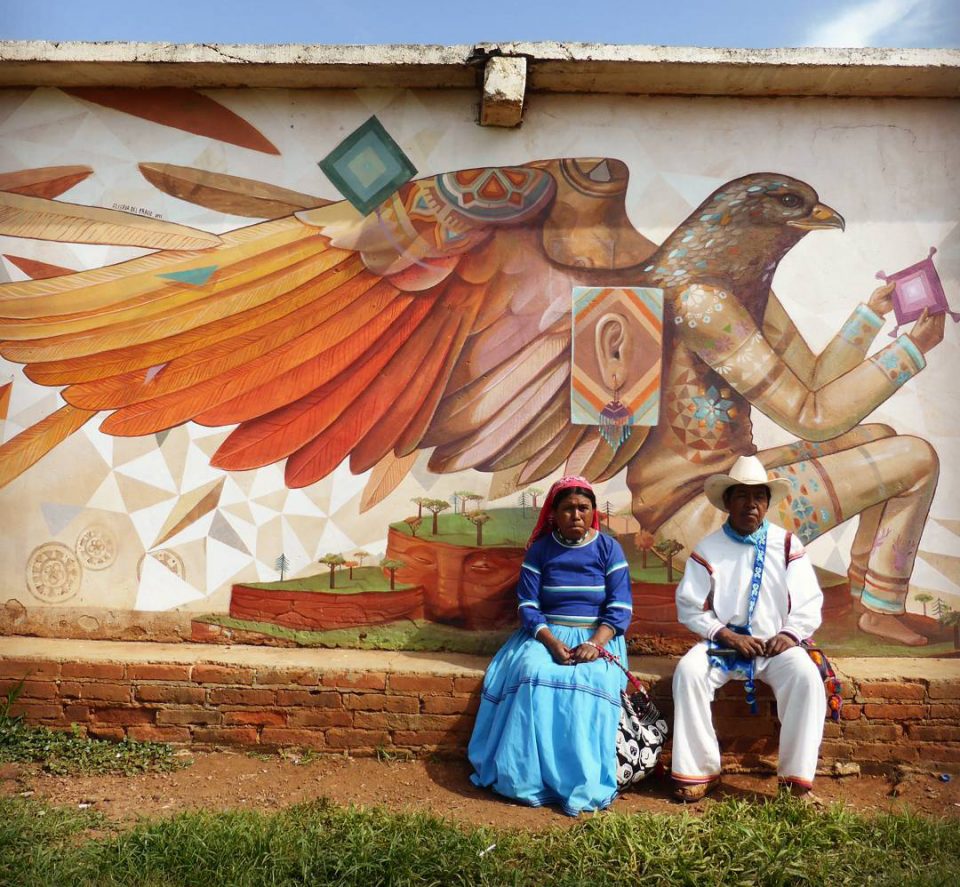 “The mural is a large space, and gives opportunity for both of us to fill it with color, outline and detail equally,” the couple explained regarding their process. “That is why Alegria del Prado has such a solid character and uniform Mestizo style.”

Painting murals has taken them to places del Prado and Alegria could never have imagined. Within this past year, the duo traveled to cities in Portugal, Mexico, Spain and the United Kingdom. They are sharing their fantasies to remind the entire world the importance of continuing to dream. Though metropolitan areas are where Alegria del Prado’s artwork primarily thrives, the team also appreciates painting in more rural and barren locations.

On collaborations with other artists, the two noted that most collaborative projects are often freestyled and unplanned, but met with warm welcome. Alegria del Prado and other street artists’ willingness to work together encourages the world to keep imagining, even when we seem so often lost in the rapid anxieties and insecurities of routine living.

“[Collaborations are] something that creates fraternity with others of your guild,” the couple said. “In urban art festivals, where artists from many places participate, it is where more spontaneous interventions are born. It is within those events that you have the opportunity to share experiences with people who do the same as you from another part of the world.”

Over recent years, street art has become widely accepted in contemporary art galleries. From Shepard Fairey to Banksy, urban art is contributing to a community that was not readily accepting of it at first. Alegria del Prado will be showing their new exhibit Empatía (which translates to “Empathy” in English) at the 1810 Gallery in Sacramento beginning October 6. Venues like the 1810 Gallery retain Alegria del Prado’s street style despite being displayed indoors.

“It is an exhibition that gathers part of our work,” del Prado and Alegria remarked when asked about Empatía. “There are pieces that we have produced in Mexico and others in Spain, and works in which through color and symbols we can transmit a feeling of unity with the living forms with which we coexist. It is an invitation to feel that we are an essential part of a whole, whether as the protagonist of some plantation or an animal. We want to evoke that importance forgotten by man.”

For the remainder of the year, del Prado and Alegria are scheduled to paint a series of murals for the University of Guadalajara in Mexico. They believe that within the facilities of such campuses, they are making a difference within the scope of self-sustainability. They may also be painting the biggest mural in Guadalajara. Additionally, they have invitations to participate in a new festival in Peru and a festival in Greece. With such progressive projects in the works, it wouldn’t be surprising to see their name and art pop up on your timeline soon.

“The future is always unpredictable,” said del Prado and Alegria. “We as artists hope to continue doing and living what we like, always thanking all the people who support us so that this can continue to be so.”

We can only hope that Alegria del Prado will continue to paint fantasies for us to daydream about in the real world.