Recall the first moments of waking, when, adrift in the mental flotsam left over from a night of vivid dreaming, you try and sort the pieces together. The half-remembered places and in-between entities that had charged through the landscape of your imagination with such jarring solidity now burn away like soap bubbles in the sunlight of logic. What allows us to weave these strange symbols and portents together so seamlessly in the sleeping hours? In our best efforts to reconstruct a dream, the results inevitably resemble a collage—fragments of wonder, alarm and mystery snatched from the subconscious.

For Angela Tannehill, the results are more seamless than most. In the two-odd years since she began working on her mixed media pieces—found cutouts layered and blended into textured background painting—she has honed a special knack for creating surrealist landscapes possessed of a storytelling power.

A few months back at ArtStreet, one could see small crowds engrossed in the story told by Tannehill’s largest work to date, After Us. It depicts an edenic wilderness of lush growth and harmonious life: peacocks, wolves, hares and snakes frolicking among the littered remnants of human craftsmanship—an ornate chair, a vintage automobile—gracefully decaying in the new unpeopled paradigm. One of the standout works at the month-long event, it left an impression of depth and animacy, as if it might start moving once all eyes are off the canvas. Her back catalog offers the chance to go deeper into this peculiar realm: Manta rays and starlings fly together in the dawn sky, while polar bears and hummingbirds emerge from portals into space. Though architectural wreckage and a disembodied human presence can be found scattered throughout these constellational works, they are always in some way subsumed by the elements; nature has figured largest in her choice of subject, an enduring influence from a childhood in the countryside.

When she’s not piecing together pipedream perspectives and hypnagogic hybrids, Tannehill harnesses her creative powers for community impact, a vocation she labels “design for do-gooders.” This includes designing promotional material for nonprofits like Sutter Health, and creating around 50 book covers for the youth literacy outreach group 916 Ink, which helps young people tell and publish their stories. If the amount of effort expended in promoting creativity in others has a feedback effect, it has surely reverberated loudly in Tannehill’s work, driving her to create more and amplify outward her normally introverted nature.

We recently caught up with Angela to find out about the ArtStreet experience, the value of community involvement and the virtue of the unexpected in her chosen artform. 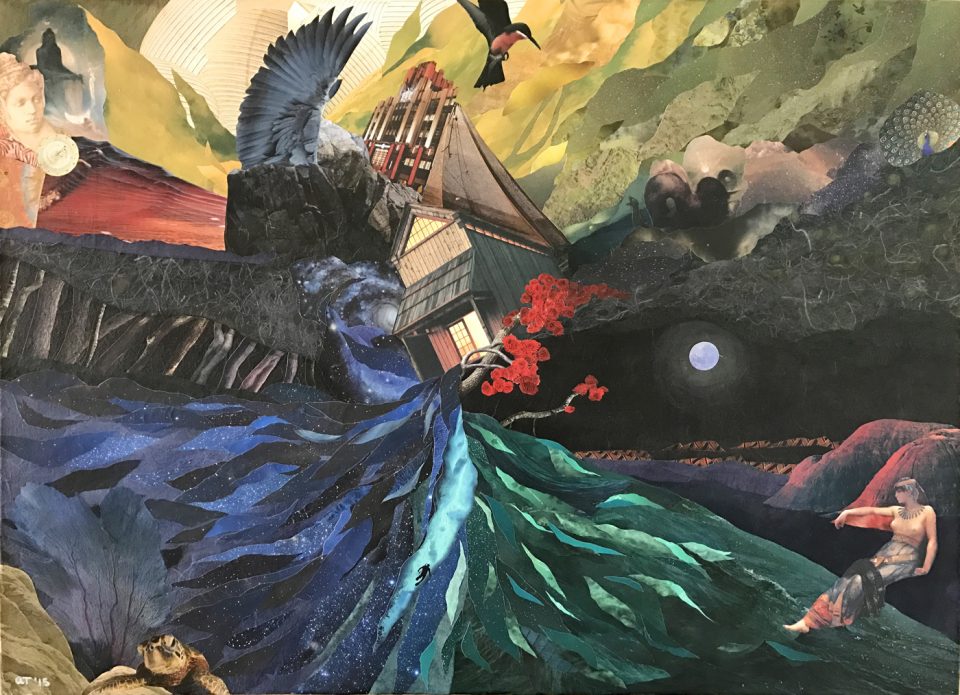 How did you go about making your piece for ArtStreet, After Us?
It was a little different because they wanted to know what I was going to do ahead of time, and I had to put it together loosely as a digital sketch beforehand. I was really nervous, because it was so much bigger than anything I’d done before. I had to build the wooden canvas. Usually I sit back and filter through all these different magazines and books, and whatever elicits some sort of an emotional connection for me, I gravitate to it, put it down, and if it works, it works. With this one, it was harder to use my smaller scrapbook elements because everything was so large. There’s a big tree in the corner, and since there’s no magazine I have with a tree of that size, I printed out little pieces here and there online to make a composite of a tree. I just had to keep in mind what the theme was, which is being us [people] being taken over by nature. In my other pieces, the theme is pretty loose, and it may end up saying something completely different by the time I’ve finished it.

Would you say that nature is the dominant theme in your work? What pulls you toward it?
I just like how organic the textures are—the movement of water especially. And there’s so much symbolism in nature, water in particular. Then there’s the draw to my childhood, because there was so much nature in my childhood that I don’t have quite as much of now. Our family lived in the country, surrounded by fields. When I was around 10 years old, I would take walks out into the field and go fishing by myself. We were always catching anything that moved. My belief is that we truly are connected with every living thing on the planet. And my fear is that right now, it’s like this heartbreaking connection in a way, because the more we learn—the more we know we’re connected, the more we know that we’re ruining things, hurting the world with our presence and our negligence. We’ve lost our connection in some ways, even though it’s unbreakable, but because we’re ignoring it, we’re ruining it. It’s scary, but at the same time it’s comforting, because nature has a way of righting itself. There’s a counterbalance, and maybe it will make up for whatever we’ve lacked. Maybe we won’t fare so well, but I feel like the Earth will right itself. 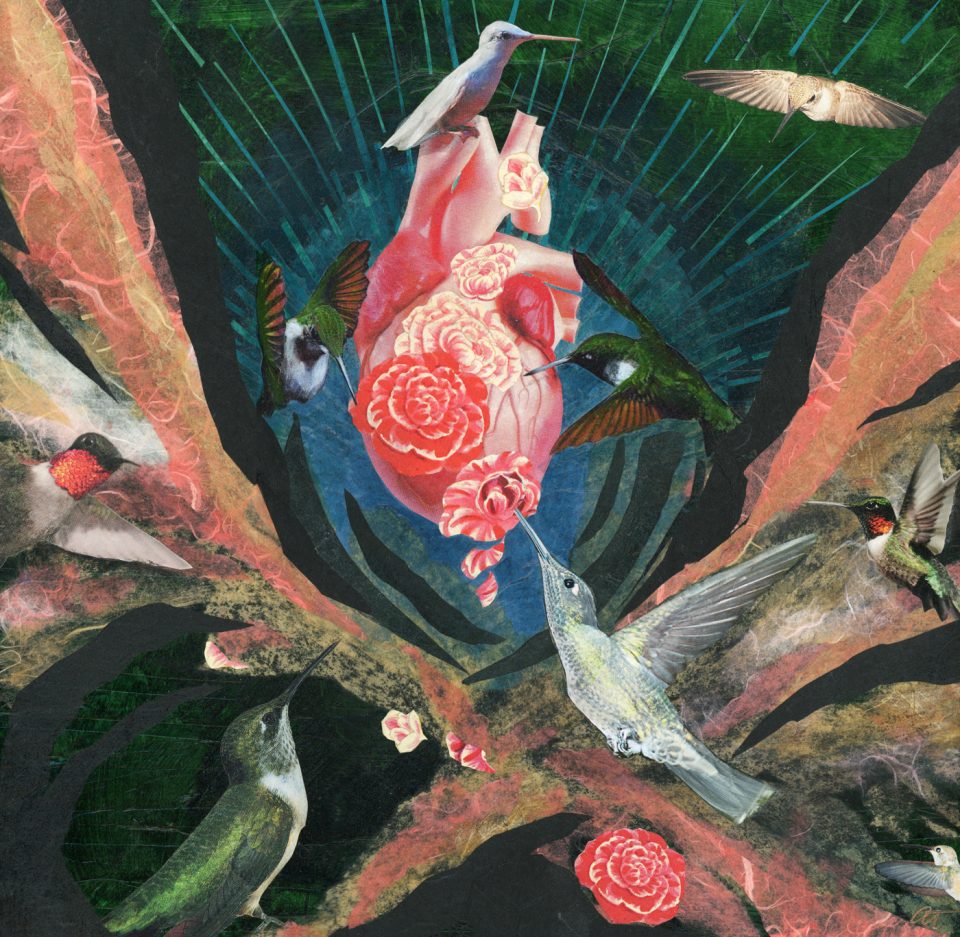 How did you begin working in collage?
I went to school for fine arts and I got my BFA, but I really didn’t do anything with it for years and years. I went into graphic design, and I did a few things on the side, but what inspired me to get into collage in particular was the work of Jill Allyn Stafford. She was a board member at 916 Ink, where I do a lot of design work. So I saw that, and I had these little three-by-three wood samples I’d picked up at a thrift store, so I started layering things on them. I think the surrealism and the fantasy themes have always been in the back of my mind—the dream worlds.

I like collage better than painting. I can paint, but I could never do exactly what I want with it. Part of the fun of collage is not knowing where I’m going to be later in the work. It has the element of surprise. I won’t know what a piece is going to mean until two elements suddenly come together. When you’re making a collage, you’re bringing with you the history of whatever piece you’ve just used to the other things on the palette, whereas painting is directing from one source—your mind.

Do you have a method for hunting down your source material?
I have so many collection items right now that I might have to stop, but usually I have to make a trip. I really like getting pieces from the Time Life series, National Geographic of course, and textbooks are great. I have probably hundreds of magazines and books that I use, but lately, since ArtStreet, or a little bit before, I found Flickr commons, and I use that a lot because I can print to size. If you find the right thing and you want it aged, you can make it look aged. The crackle effects come from a paste, or sometimes it’s layered tissue paper.

Do you have any mood music or media that helps your work along?
I watch bad television, but it has to be a specific kind of TV. Have you ever seen the show Supernatural? Cheesy sci-fi or comic book stuff. Something that would be perfect for the 14-year-old boy, that’s what does it for me. It’s light enough where it occupies only a part of my brain, so the other part can go into dreamland and be automatic. But it’s interesting enough, and a lot of the time there’s weird creatures in there, or something otherworldly. I’ve probably watched every episode twice, I just put it on repeat. The only thing I can’t watch at all while working is comedy—it puts my brain into a completely different kind of rhythm, and everything comes out weird and awful. It’s just something about where my brainwaves land, that puts me in a space where I can create without having to think too hard. When I was little, a big influence was Fantasy Island. That, and we also used to have this Saturday afternoon show that was nothing but dinosaurs, monsters and ghost stories. Anything that has mythology attached to it, or a creature feature of any kind, really drew me in. I guess that’s why those types of shows put me in that right frame of mind, because it just takes me back to my youth. I guess I haven’t changed much. 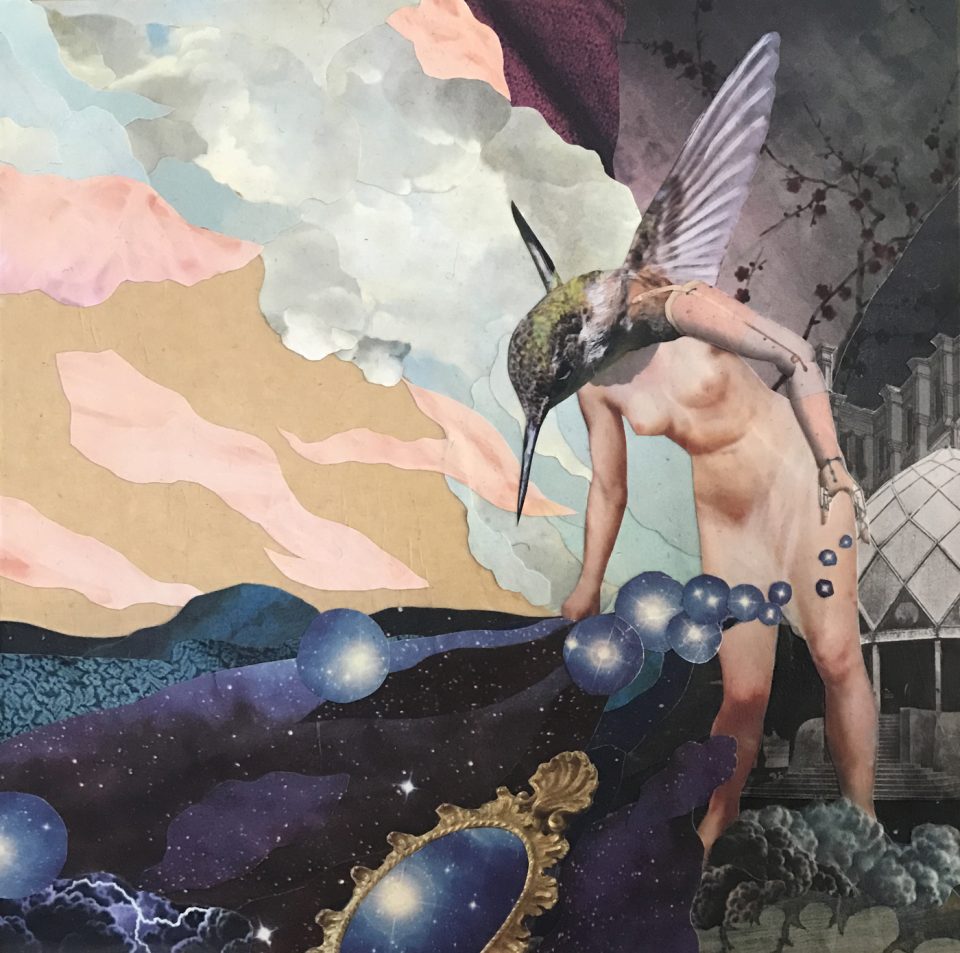 How would you describe the impact of 916 Ink?
Years ago when we started, everybody thought it was going to be a literacy program. And it kind of is, in that there’s reading and writing involved, but what I felt from the beginning that it was going to be, and as it turns out it really is, is kids writing and telling their stories, getting positive feedback and encouragement. You can watch somebody grow, become able to take more chances, have a little more confidence. I swear, you even get a little smarter when you’re allowed to open up, to take things in. You’re not insecure and closed off as much. The kids, more than anything, find this sense of confidence that they didn’t have, and they do better in school and in life. I just posted this the other day, it’s a quote from Rainn Wilson, “If you can tell your story, you can heal yourself.” That’s what’s going on there. I haven’t gone to one of the readings without getting choked up. I’m still fairly new to making art, and I think the biggest thing that encouraged me to start was surrounding myself with people who were positive, encouraging and accepting. That didn’t happen until I started working with 916 Ink. They were great cheerleaders, and they get you to come out of your shell.