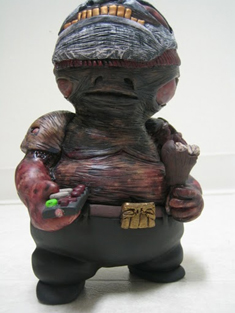 Following your instincts may sound like the easiest thing in the world to do, unless of course a primal urge is pulling you in an unlikely direction. East Bay toy sculptor Jay222 can certainly relate. Just a handful of years ago, he was enrolled in the Paul Mitchell school, studying hard at the hopes of “working full-force in a salon” as a hair stylist. But a class in special effects/horror movie makeup drastically changed the course of his life.

“That one-day class made me want to put all my focus toward creating monsters instead of doing people’s hair,” he says.

Though his skill at his craft may speak of a life’s work, in reality Jay is relatively new to sculpting. He says he started in 2006, barely five years ago. In fact, fine arts were just something he appreciated in the past. He admits he used to “paint a little bit,” but one day he went down to an art store to pick up some clay and decided to make sculpts of his friends just to see how they would come out and to impress the many visitors to his then home in Daly City, Calif. 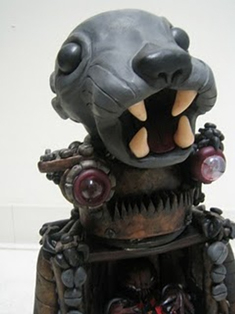 “We always had a lot of people over,” Jay says. “I’d constantly come into contact with so many new people, and I just thought it would be dope if the people who lived in the house had their own figures set up on the fireplace.”

The turn in Jay’s path that led him to toy sculpting occurred when he wanted to bestow a fellow artist with a token of his esteem. After getting tattooed by Horitaka, a renowned tattoo artist and owner of State of Grace in San Jose, Calif., Jay made his way to San Francisco to buy him a gift.

“I was loving his tattoo work,” Jay explains. “I was loving what he put on me. He’s such an amazing artist, so I wanted to give him a gift. I went down to Haight Street in San Francisco–Kidrobot–and I came across a tattooed Dunny [“a blank canvas designed to be repainted and reinterpreted by artists from many different backgrounds,” according to the Kidrobot website; it takes its name from its cartoonish rabbit shape] that Huck Gee had made. That was my first exposure to the art toys, and from there, I was just hooked.”

Jay isn’t the first fine artist to make the jump into making art toys. For example, in addition to the work of Gee, a United Kingdom-born illustrator and toy sculptor, Kidrobot’s Dunny series also includes the work of Japanese manga artist Junko Mizuno and Frank Kozik, best known for his iconic rock posters.

“I think a lot of it has to do with nostalgia, but it’s also something you can hold,” Jay says of the fine art toy movement. “You can bring it with you. You can bring it on trips. You’re able to collect them and display them as three-dimensional art pieces in your home or studio. I think that has a lot to do with it.” 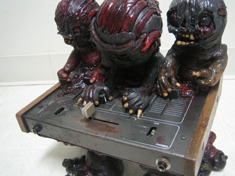 Whatever the reason, toys are clearly not just for kids any more. A quick perusal of Jay’s creations is proof of that. On his website, Jay222toy.blogspot.com, Jay has posted videos (one featuring DJ Qbert) of the artist at work. In them, you can see as he turns blank, white, rodent-shaped action figures into grotesque (yet still kind of cute) creatures–the kind that would make George Romero, Sam Raimi or even Italian “Godfather of Gore” Lucio Fulci proud. Jay’s horror-inspired work can also be found here in Sacramento at Dragatomi, which features his splatter-ific Benny Burlap sculpts and the charmingly nauseating Up-Chuck Throw-Up Kids figure. What’s remarkable about these creations isn’t only the vivid and twisted imagination behind them, but also the level of detail. Strangely enough, it’s Jay’s training as a hairdresser that honed is skill in recreating sinew and fascia.

“At [the Paul Mitchell school], they teach you all anatomy,” Jay says. “I studied it during school and kept all the books and kept looking at all the anatomy and kept trying to match the muscle tissue in the books and recreate what it would look like on these characters.”

Jay will bring a whole slew of memorable characters to Dragatomi April 9 with the opening of his latest art show. A tribute to one of his all-time favorite films, Big Trouble in Little China, this will be the first show for which Jay has served as curator. He’s getting off to quite a start, too. Also featured alongside Jay will be notable artists such as local favorite Skinner, Dave Correia, Task One and Alex Pardee.

“I met Alex a couple years back at Wondercon,” Jay says of Pardee. “When I first saw his work, it really blew me away–his detail, his colors, his imagination. He’s brilliant. He’s a genius. His work really caught me, and I’ve always been a big fan. I was really stoked when he said he’d be down for it.”

Jay describes Big Trouble in Little China as a film that has “everything.” Debuting in 1986 and starring Kurt Russell and Kim Cattrall, it’s a story of a truck driver (Russell) who ends up in the thick of an ancient, mystical battle in Chinatown. The action-adventure/comedy was directed by John Carpenter, better known for his horror films such as The Serpent and the Rainbow and the Halloween series (the good one, not the Rob Zombie one). 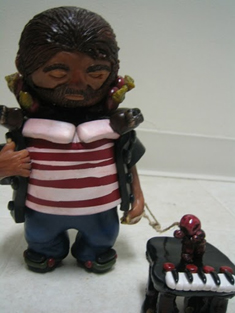 “It had black magic, sword fight scenes, martial arts, comedy, monsters, creatures,” Jay gushes about Big Trouble in Little China “It had everything that’s awesome about a movie in one movie.”

While his love for the campy classic is clear, would other artists jump on board and share his fervor for the film?

However, Jay stuck with his original idea, and in the end found that others were just as stoked about the project as he was. “It felt right,” he says.

Jay also went with his gut when creating his contribution to the show. He sculpted the Three Storms, characters from the film imbued with the powers of thunder, rain and lightning, which will be available in three different versions thanks to Task One, who helped Jay with the roto-cast resin process.

“I kind of normally stick with my first instincts as to what to make,” Jay says.

And why not? They seem to be serving him well thus far.

Big Trouble in Little China: A Tribute opened at Dragatomi on April 9. A full list of participating artists can be found at Jay222’s website, Jay222toy.blogspot.com. Dragatomi is located at 2317 J Street in Sacramento and online at Dragatomi.com