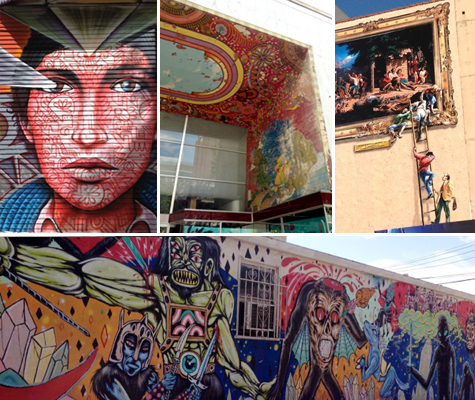 Guide yourself through Sacramento’s many murals–with our help, of course

May is Bike Month occurs once a year, encouraging all Sacramentans to forgo gas-guzzlers and hit the streets on two-wheeled transportation. Learn to tune up your ride by attending the free bike clinics at any Mike’s Bikes location or participate in the Capitol Park Neighborhood Bike Ride pedaling over bridges and through trails with friends. But if it’s eye candy you’re after during a leisurely ride with fellow cyclists, Submerge has once again created a list of murals around the Midtown area you can appreciate while on your fixie, cruiser or single-speed. Artists featured this year include Shaun Burner, Alex “Cabron” Forster, Skinner and plenty more. Since last year’s map, a growing number of new murals have added a colorful touch to coffee shops, convenience stores and even a wildlife nonprofit building. Let this guide be your real-life Choose Your Own Adventure, except better, with bicycles and artistic expressions. Just plug these addresses into Google Maps and have at it! 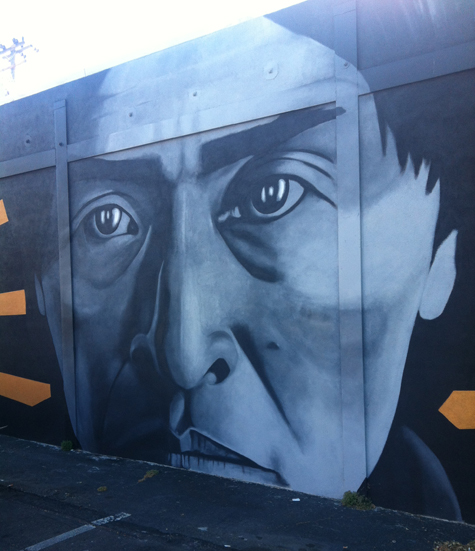 Cabron
(Start of the tour)

Alex Forster, known as Cabron, won the Valley Vision’s mural contest in 2010, choosing to represent the Sacramento Valley’s past by painting the Native American Ishi of the Yahi tribe on the side of the non-profit building.

“I just wanted to show one iconic figure from that era and how demographics have changed,” says Cabron of the mural. “Ishi’s story was told in all the schools. He was supposedly the last of his tribe and he epitomizes that shift from the old world and the modern world clashing.” 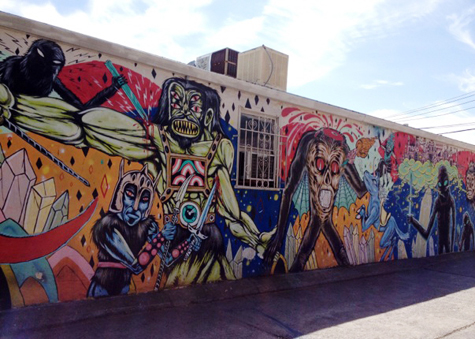 Off the beaten path in the alleyway of the Javalounge coffee shop are a gang of monsters painted by local artist Skinner. His mural of ghouls survived a truck smashing into the art piece a couple years back according to the artist, who plans on touching up the piece before summer.

“I create because it is a function of who I am,” he says. “It’s in everyone. Everyone has an instinct to explore; it just depends on how much you pay attention to that aspect of yourself [and] how much you nurture your path of discovery.”

Skinner is currently at large in Florida doing what he does best. 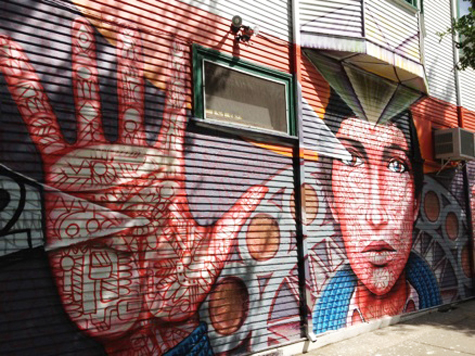 Living so close to a blank canvas was too tempting for artist Shaun Burner. Often frequenting Royal Market, Burner bugged owner Haripal Singh for permission to paint the building until he finally gave in.

“The open hand with the light coming out [signifies] letting go and the clenched fist with the dark oozing out is holding on,” explains Burner. “The diamond from the third eye for the crown Chakra and also in western culture, the diamond is revered as such a precious gem when the real gem is the mind.”

Artist and friend Mike Rodriguez also helped with Time to Wake Up, which is still a work in progress according to Burner. 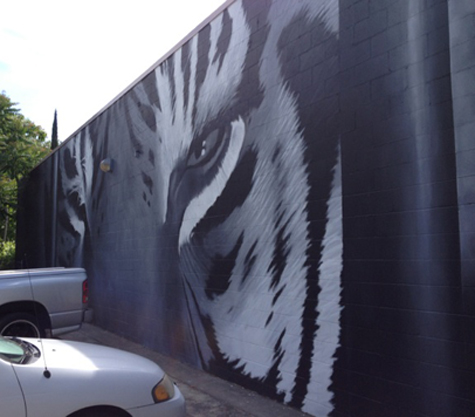 First Ishi, now El Tigre. Cabron once again brightens up the side of a non-profit building, this time, for Born Free USA near 12th and S streets.

“When I paint, I like to tell stories. When I hear a story, when I read a book, I visualize it,” he says of his art.

Catch the 85-foot-wide, monochromatic tiger during May is Bike Month and be sure to attend the soft opening in celebration of the mural on June 9. This Second Saturday event features DJ Dom Som, indie craft vendors and you can even meet Cabron himself. 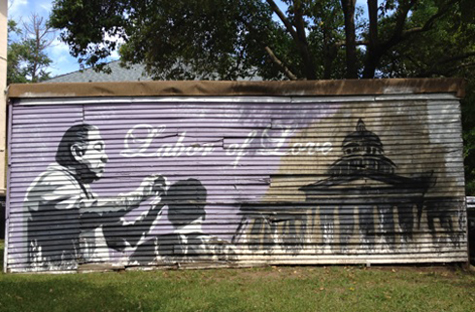 Gabriel Romo is currently painting an exposition in Guadalajara, Mexico, with artists Shaun Burner and Miguel Perez. Romo’s Labor of Love mural rests on the side of an old, wooden shed next to Limon’s Barber Salon.

“That was the first mural I painted outside,” admits Romo. “That piece was inspired by heartbreak. It started out as an ‘emo piece’ about the labor of love, but it was something the owner was not too interested in. I reworked the idea to include the barber, his labor of love and the piece itself was my labor of love to the community.”

Artist Josh Silveira helped complete the mural alongside Romo, who says painting outside has become his new labor of love. 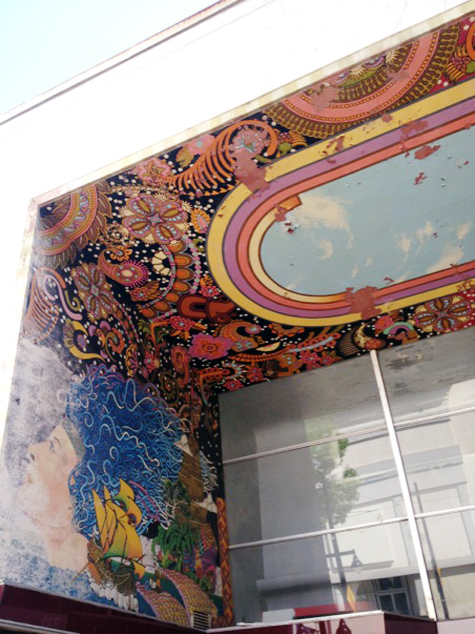 K Street businesses have come and gone, but one iconic mural still remains. Chipped away in some areas, but still as bright and psychedelic as ever, is rock concert poster artist Frank Carson’s work. The mural was completed in 1973 and resides on the old Tower Records building. Check it out–man. 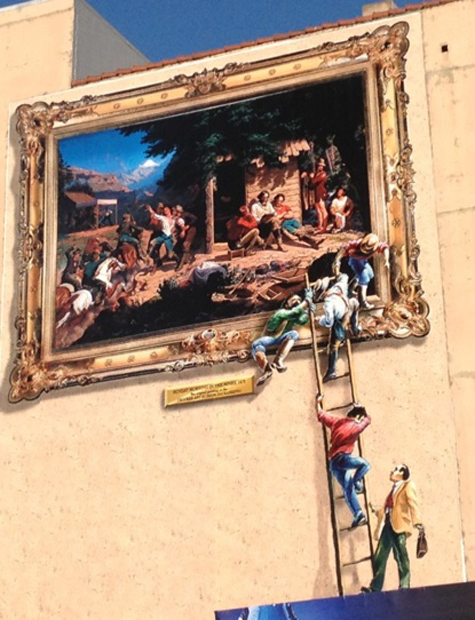 Inspired by the original art piece that hangs in the Crocker Art Museum by German artist Charles Christian Nahl is Stephanie Taylor’s digital reprint on the side of the Masonic Temple on J Street. Whiz down the busy street, safely of course, and catch a glimpse of the men who appear to be climbing out of frame. 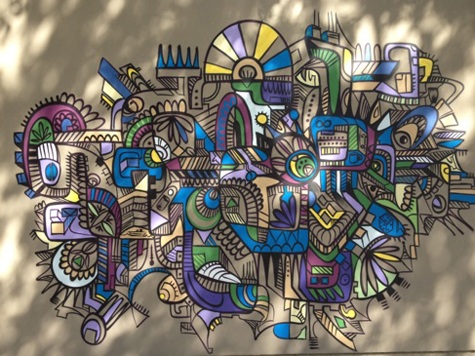 Slapped on the 14th Street side of Shine coffeehouse is another piece by Shaun Burner. Burner admits to just going with the flow when it came to painting this piece, throwing it up in a couple of hours.

“For me, it is a complete release… If I mess up I just make it into something else, not worrying about the line I just dropped or the one coming up, but the one at hand. For me, this is meditation,” says Burner. “It’s my tai chi. It’s a metaphor for life. Do the best you can with whatever you do. Don’t reflect on the past too much or worry about the future, but be present in this moment that is continually happening, and own that shit.”

Burner’s on-the-spot Ancient Futurisms make another appearance on the front of the Midtown Furniture & More store on E and 16th streets.