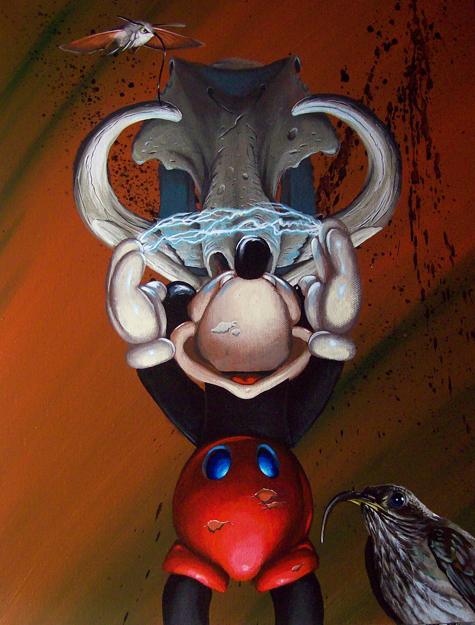 A collection of exotic colored butterflies and beetles mounted in simple black frames hangs on the studio walls of San Francisco based artist Robert Bowen. Scattered around the room are various other oddities: animal skulls and mounted antlers, curious antiques and Disney collectibles. The latter might not seem so odd in comparison to the others, but in Bowen’s paintings he reveals to us exactly how he feels about Mickey and friends. One in particular shows Mickey Mouse standing at the center of the composition, his cartoon white hands rise into the air and violent electricity passes between his eight fingers. His head is cocked up, revealing his iconic grin that now seems sinister. Behind him is an enormous elephant skull; the tusks curling and mimicking Mickey’s shocking arch.

Although it all seems dark and sick at first glance, it’s hard not to ponder his sense of humor in all of this. Who paints Mario Lanza next to a giant banana that peels to reveal octopus tentacles? Or, Peter Criss of KISS appearing as Jesus with two giant kittens resting innocently in the foreground? It’s completely twisted but in a way that you can feel alright about being totally invested in it. A painting like St. Elmo’s Fire shows Bowen’s hilarious generational approach to subject matter. The lovable Sesame Street character Elmo is pictured as a biblical saint breathing fire as a white dove flies overhead.

“It’s what I thought was a pretty silly joke and then it turns out to be a painting I’m kind of proud of,” says Bowen.

Bowen himself isn’t the only one impressed with his paintings. Recently, Juxtapoz magazine said that Bowen “is overdue to blow up in the art world.” Even genre superstars like Alex Pardee (whom Bowen has collaborated with) have chimed in on his skills with a paintbrush.

Juxtapoz is arguably one of the high ranking authorities on pop surrealism (lowbrow if you can get away with it, new contemporary if you’re selling to the big wigs) and a glance through the monthly publication will surely point you in the direction of who and what is making waves in the scene. And though Bowen has had his time to shine, many artists who have done so similarly are no longer new and interesting and have simply become a drop in that ocean past the breakers. The key is change and, furthermore, reinvention. Artists like Doze and Twist (the latter who was an important influence for Bowen) have continued to reinvent themselves along the way and have thus staked a future claim for themselves in an oversaturated genre. Bowen is on track to do just that. He has continued to evolve by incorporating stencil, mixed media and sculpture into his shows and isn’t stopping there.

“I want to have bronze works of some of the elements in my paintings,” says Bowen. “Some of the figures and whimsical characters would make really cool bronze sculptures. It’s always in the back of my mind.”

For Bowen, bronzing harks back to his art school days, when he learned quickly that the painting program wasn’t for him. With his introversion toward other students and an overbearing faculty, Bowen eventually “gave up on having art school teach” him how to paint. Since he was already enrolled, Bowen made the switch to a major in sculpture, hoping to have better luck with his formal art education.

A glance at Bowen’s own art history leaves me wondering why he chose to attend art school in the first place. Graffiti was Bowen’s first love and on the walls is where he learned to paint and where he studied color theory and composition. When Bowen was a kid, art programs were being cut (sound familiar?) and there weren’t many outlets for creative expression.

“When we were all growing up, public schools were falling by the wayside,” recalls Bowen. “It’s sad that kids have to resort to doing something that’s considered illegal to get an artistic background.” 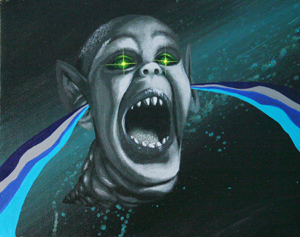 The graffiti influence is seen in Bowen’s paintings in a way that lends itself to his stylistic approach. The bright, bold colors of spray paint translate to acrylic selections on the canvas and what we see is beautifully rendered characters and natural world specimens mixed with lifelike portraits of pop icons like Schwarzenegger in Conan the Barbarian or Batboy from the pages of Weekly World News. What I like about Bowen is that he’s a sort of keeper of all things cool in pop culture. He paints them to mock them, yes, but he also paints to preserve them. The images from his childhood are sacred inside his own mind, and we’re offered an exclusive glance at what he chooses to unearth via these portraits. He’s not embarrassed about being a self-proclaimed pop culture geek, and he’s quick to defend his favorite relics. A recent Twitter post from Bowen reads, “Dear Hollywood, PLEASE stop ruining everything that was cool about my youth one shitty movie at a time. It’s getting really sad…”

It wouldn’t be fair to pigeonhole Bowen by only shining a spotlight on his horror-like characters or his pop culture icons, though. The Audubon Society is a peak interest for Bowen, and we see that abundantly in his paintings. Out of the 51 images in his online gallery, nearly a quarter of them feature some sort of bird or bird-like element. And it doesn’t end there. Sloth, ferrets, tarantulas, bees, what appears to be Bowen’s dog and even Bowen himself make regular appearances in his work. Those curious collections that decorate his studio are fodder for his creativity, and he has no problem locking himself away and painting whatever sparks his interest.

“I’m kind of a hermit and I stay home,” says Bowen. “I’m totally fine just sitting in here and painting.”

You’d think living in San Francisco would prove to be a distraction. I know many creative minds that have lost their way in a city that has way too much to do all time. But Bowen maintains his focus, and maybe he learned a thing or two by living in a city with a slower pace. Bowen lived in Sacramento for about seven years before he made the move back to the Bay Area where he grew up. While living in Sacramento, he crafted his painting style alongside talented locals like John Stuart Berger, Kim Scott and Skinner. The late and sorely missed Toyroom Gallery was an important meeting spot for all these artists and Bowen showed there often.

“They always wanted to put us in shows,” remembers Bowen. “I showed a lot with Alex Pardee and Poor Al.” 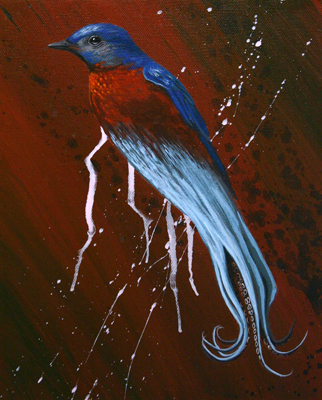 After the Toyroom closed, many of the artists who showed there frequently continued to produce art but all went off in their own directions. There were scattered galleries here and there that offered shows that were similar, but none offered the kind of regular support and progression that Toyroom did.

“They had a good eye at the time, and they brought to the town what was needed and what wasn’t there. It’s a shame that it didn’t last very long because I think it’s still needed,” says Bowen.

Even though Bowen is “the one that got away,” he still has a special place in his heart for Sacramento. He’ll return June 12 like a prodigal son for the opening reception of Beyond the Frame at the Solomon Dubnick Gallery. Also on board for the exhibit are John Stuart Berger, Kim Scott, Gale Hart, Joshua Silveira and many others. Come see for yourself what makes a Robert Bowen show so hard to look away from. 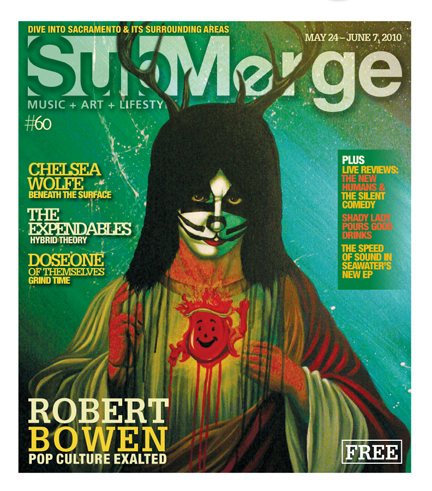