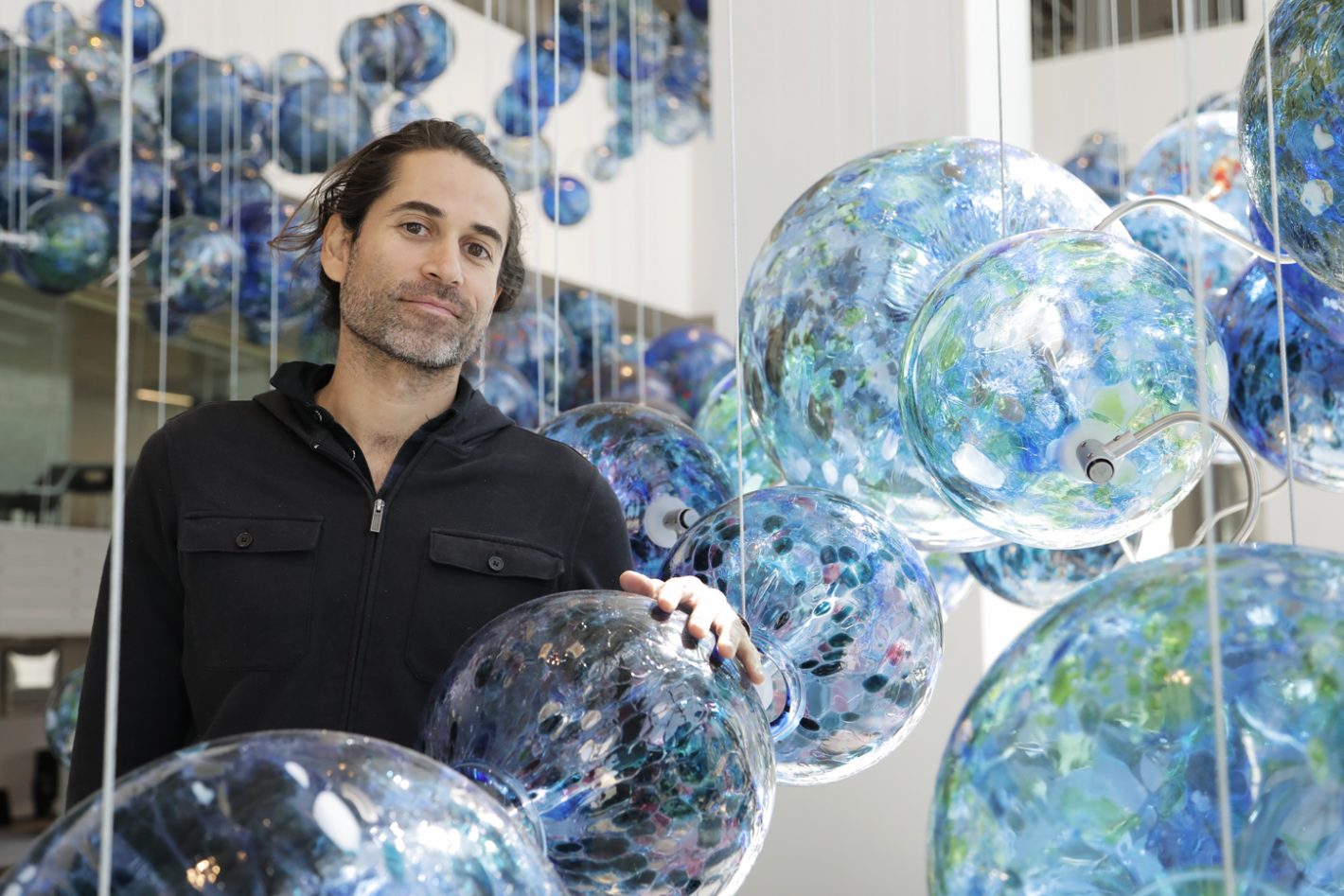 There are defining moments in an artist’s career that set into motion a floodgate of ideas that transports them into a completely different artistic direction; like the moment when Jackson Pollock came upon his drip technique or Andy Warhol realized his jam was transforming simple objects like soup cans and daisies into technicolor icons.

For local artist Bryan Valenzuela, having just completed a major art commission at the newly minted Golden 1 Center, this could very well be his defining moment. Valenzuela’s creativity easily transitions between painterly and orchestral movements—yes, this is the same Valenzuela who fronts, composes music and tours with the musical outfit Exquisite Corps—and he isn’t afraid to keep exploring new outlets for his artistic energies.

“I do a lot of thinking, and walking my dog—it’s really helpful to take a long walk,” Valenzuela says of his artistic process. “Once you sit down to start working, you do a million drawings to figure out what is in your head. I do a lot of planning and then when [I] actually start working on it, fate takes over. You can’t plan for everything. There’s a lot of accidents, so you just have to go with the flow; like the Louis Pasteur thing, chance favors the prepared mind.” 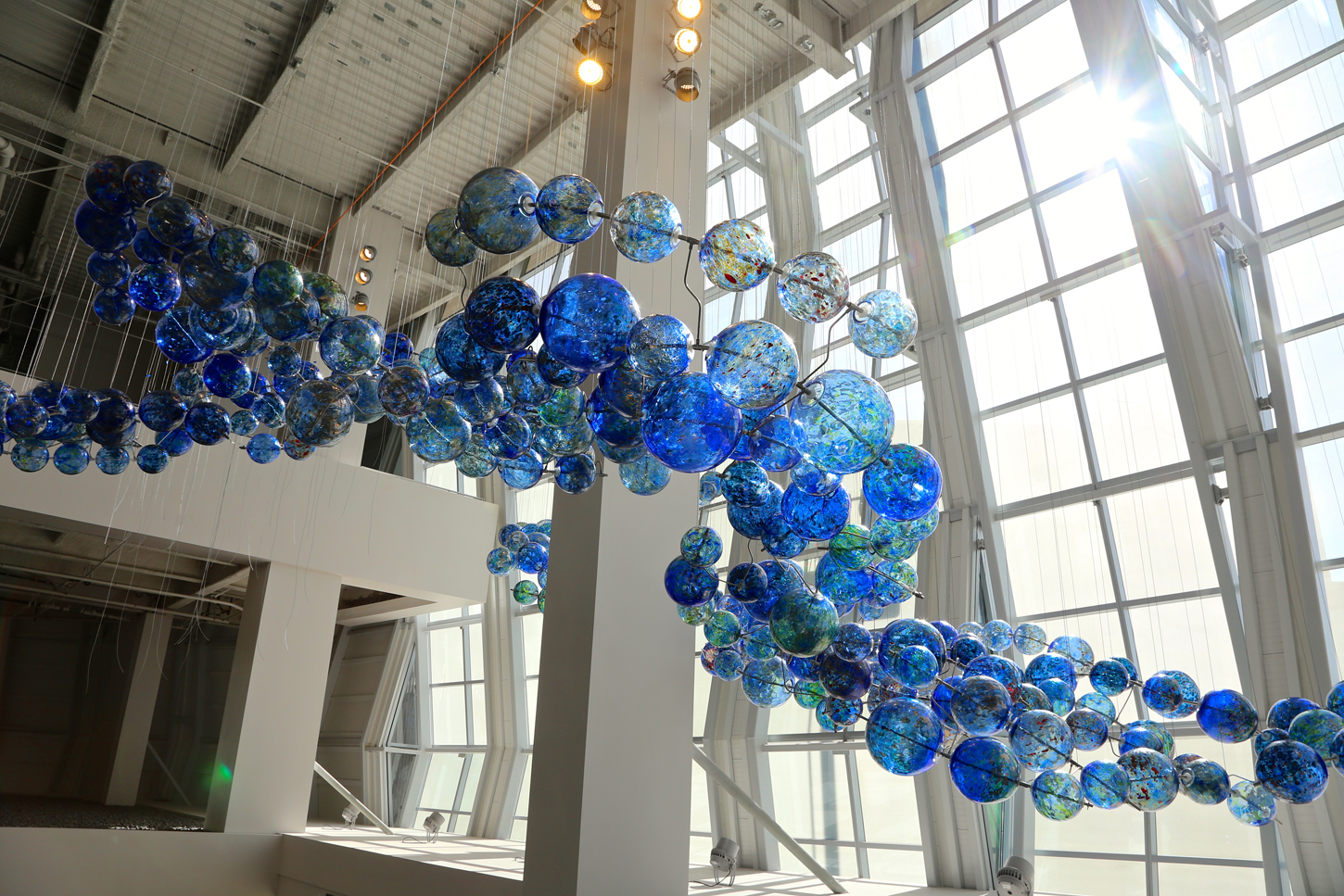 Valenzuela’s current work is a complete departure from much of the work that has come out of his studio in the last decade. The aerial sculpture inspired by the confluence of the Sacramento and American rivers, aptly titled Multitudes Converge, is comprised of 400 glass spheres in varying dimensions that span from 12 to 20 inches and weighs about 8,000 pounds, yet appears to float effortlessly in an almost meditative state from the ceiling in one of the arena’s main thoroughfares.

“I came up with the idea to use glass, having never used glass before,” he admits. “It was like, ‘They’re going to give you X amount of money to do whatever the fuck you want, what would you do?’ And so being in the space, and thinking about the light that’s coming through that window, and trying to highlight the architecture using translucency, glass seemed like the perfect material.”

To bring his vision to life, Valenzuela jetted off to Europe and collaborated with some of the preeminent authorities in the world of glass. Through a hook up from Franz Mayer of Munich, a family-owned company that’s been producing glass for art and architectural projects since 1847, Valenzuela joined forces with Jilek 1905, s.r.o., one of the oldest glass-blowing enterprises in the Czech Republic, to create the hundreds of orbs required to form his floating river in the sky. 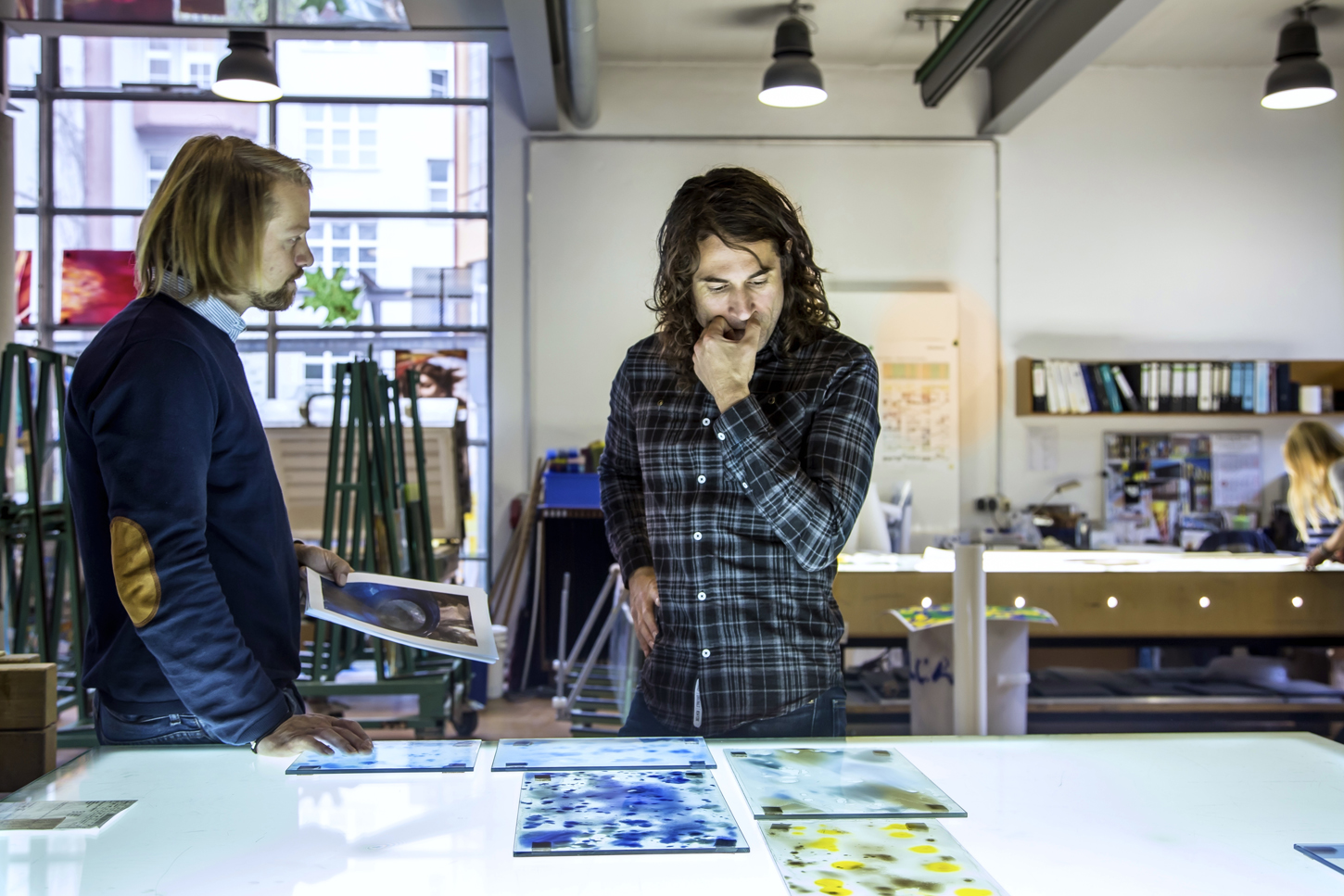 “The Czech Republic is very well known internationally for their blown glass,” he explains. “We went through this company that’s even more of a family affair; within this one factory they put five people on my project, [including] the dad, the son, who is the lead glass blower, then a cousin and a niece. I got along really well with these guys, we drank a lot of beer and did a lot of artwork and samples together, and we were able to narrow down the possibilities based on my vision.”

The confluence of the Sacramento and American rivers is one of those natural-occurring phenomena that’s both awe-inspiring and confounding. At the point where the two waterways converge into one, they inexplicably manage to retain their singular beauty. The event is derived from the very characteristics that make them so distinct: debris, each waterway’s unique marine life and even the very chemical differences between the two bodies of water produce a vivid array of color and motion.

For Valenzuela, transforming this concept into an artistic framework was both challenging and rewarding—the idea was refined and shaped over several weeks before it coalesced into the bubbling river of greens, blues and violets currently hovering over the eager concertgoers and fervent sports fans swarming through the concourse of the Golden 1 Center.

“We live in such a fast-paced world and things are going by so quickly the internet has made it so that information is bombarding you at all times,” Valenzuela admits. “I don’t know if it’s at the forefront of my mind or more subconscious, but to be able to create something that is reflective, that is meditative, or that takes a moment—a lot of the work I do two-dimensionally has a lot of different layers and it demands that you spend time with it, it asks you to spend time either deciphering it or uncovering or discovering, and so I think it’s good to slow down like that. It seems like the world just keeps speeding up.” 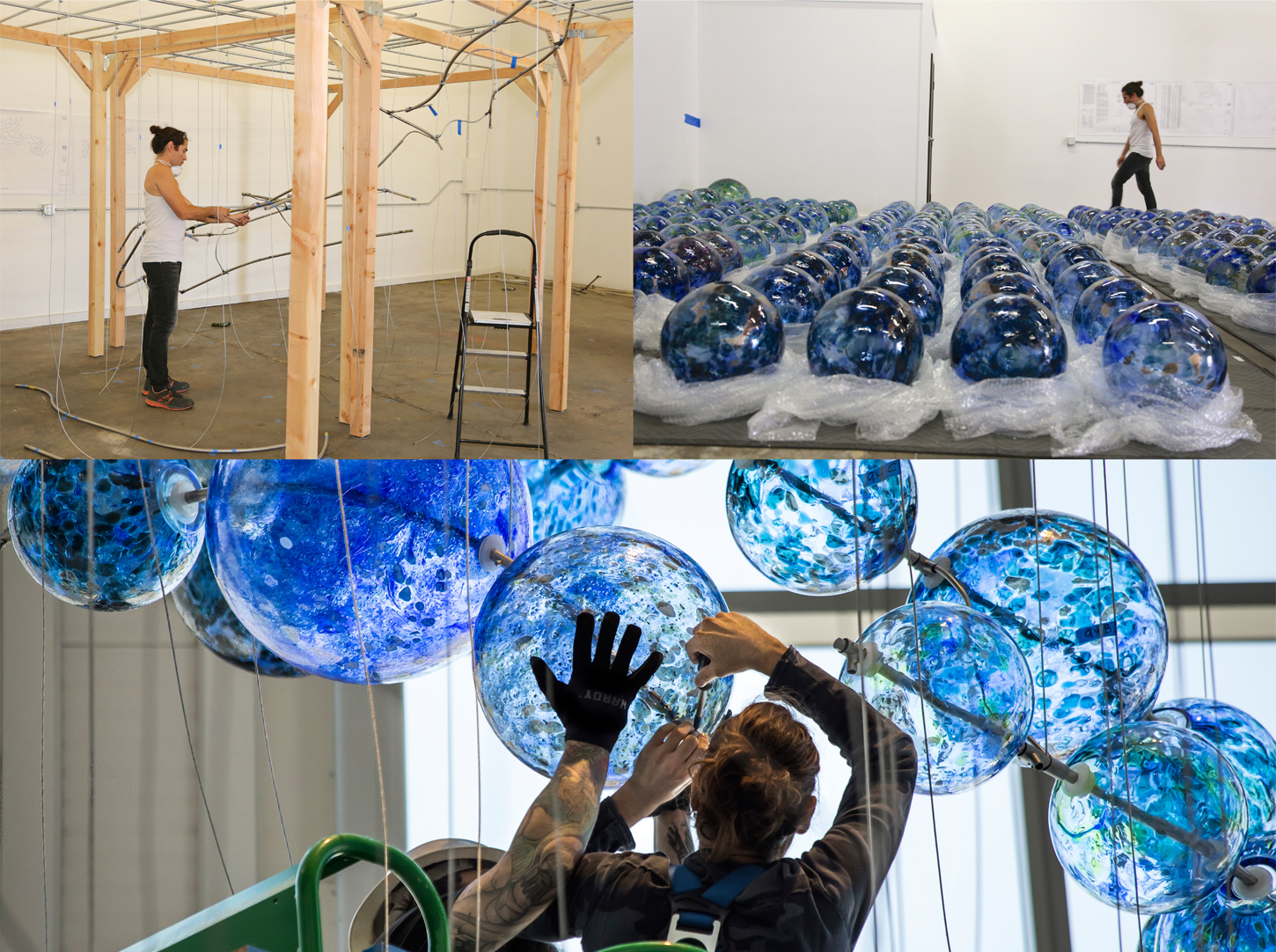 Valenzuela is no stranger to the power that public art can have on transforming space and those who interact within that space—in 2014 his artistic vision was tapped by the Sacramento Metropolitan Arts Commission to be a part of a public art project, along with 20 other artists, to complete a series of designs to transmute the dull, gray utility boxes that reside on the corners littered throughout downtown into works of art.

Valenzuela’s designs for two boxes titled Meta Mirror I and Meta Mirror II, greet waves of commuters, tourists and passersby who stroll by the corners of 8th and O streets and 7th Street and Capitol Avenue and depict everyday people sitting or standing around staring intently at their phones, plugged into the stream of information through their devices yet disengaged from their surroundings—connected yet detached.

“The art world is a very esoteric world, it’s not super inviting to a lot of people,” he admits. “In the gallery world, some people don’t feel welcomed in those spaces, but in a public space, people can stumble upon artwork and kind of be surprised by something. Rather than you seeking it out, it seeks you out. In a public space, you’re trying to create a conversation or beautify the city, and I like that idea, that people stumble upon something they would not normally seek out.”

Valenzuela’s first foray into sculpture has also allowed him to share the stage with some of the art world’s heavyweights—Jeff Koons’ 18-foot Piglet sculpture from his Coloring Book series and local art legend Gale Hart’s blown-up, deconstructed dart board were also selected to adorn the new arena’s public spaces.

Along with the tremendous opportunity to express his artistic sensibility at the new arena, Valenzuela has also amassed a series of prestigious awards that have afforded him other pretty legit moments in defining his place as a local creator—winning the Leff-Davis Fund for Visual Artists in 2014, and nabbing the Best of Show award at the 2015 California State Fair Fine Art Exhibition for his piece Bittersweet Sanctuary, to name a few.

But with all the commissions, awards and opportunities pouring in, Valenzuela isn’t just kicking back and soaking up the accolades. With a new project in the works for another piece to live in the corridors of City Hall, Valenzuela is focused on building on his current creative momentum and exploring new ways to connect with his audience. The artist even hinted at hooking back up with his musical cohorts in the spring and throwing in an upcoming show for that other audience of his. Spoiler alert: there’s already a new Exquisite Corps album waiting in the wings, ready to be mixed and released. 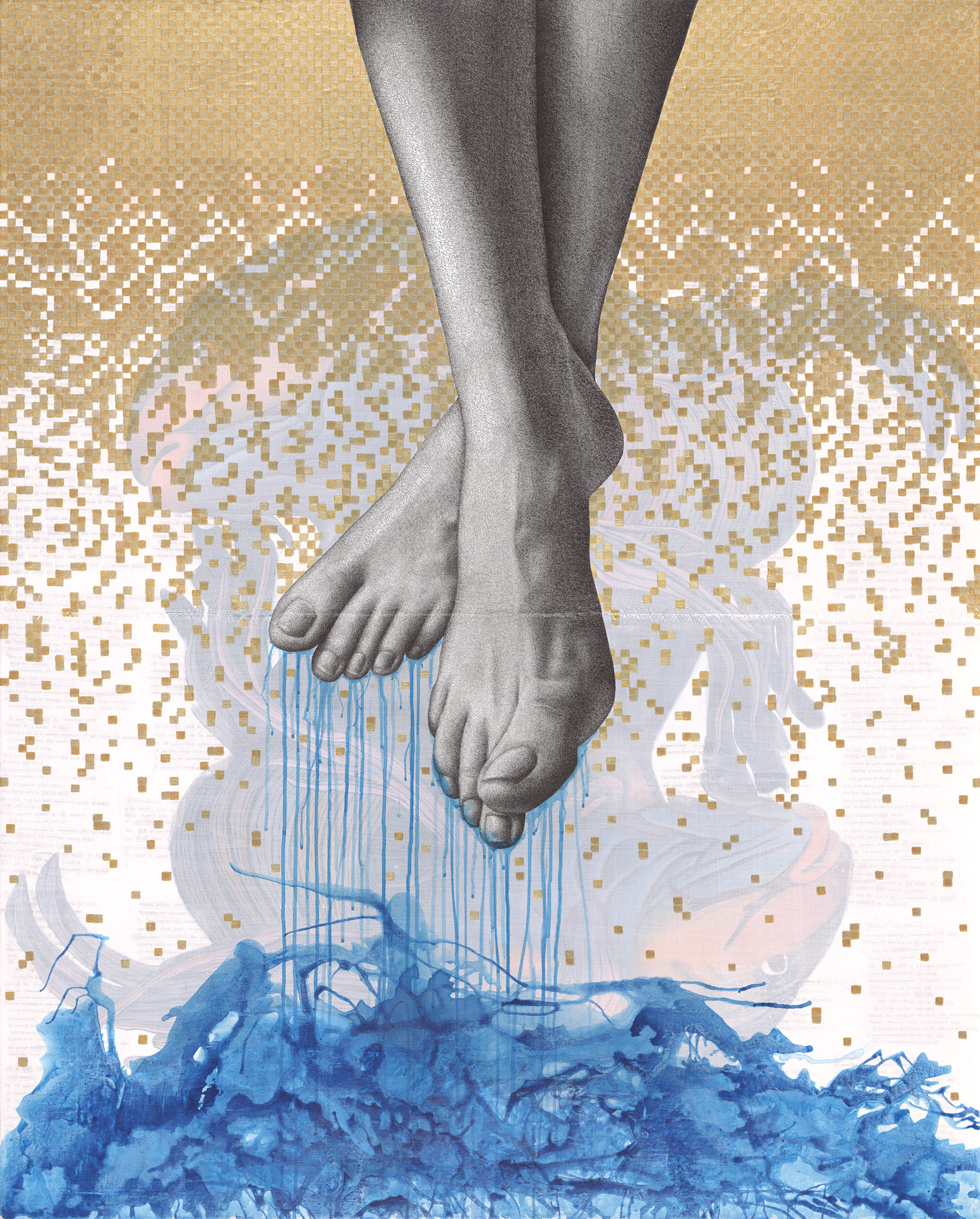 “It’s been a really great year, so far,” he confides. “There’s obviously been challenges, it’s been difficult in certain areas but it’s been really fun, and stressful and exciting, and intense. I’m just looking to continue it and keep riding the wave.”

In addition to his piece at the Golden 1 Center, you can check out Bryan Valenzuela’s work at Beatnik Studios (alongside Rora Blue and Brian Shea) in an exhibit called Form-Lore, on display until Nov. 17, 2016. Go to Beatnik-studios.com for more info. You may also attend Valenzuela’s talk at the Crocker Art Museum, “Surrender to the Process,” on Nov. 16 at 1:15 p.m. This lecture is part of the Kingsley Art Club Lecture Series. Go to Crockerartmuseum.org to learn more. 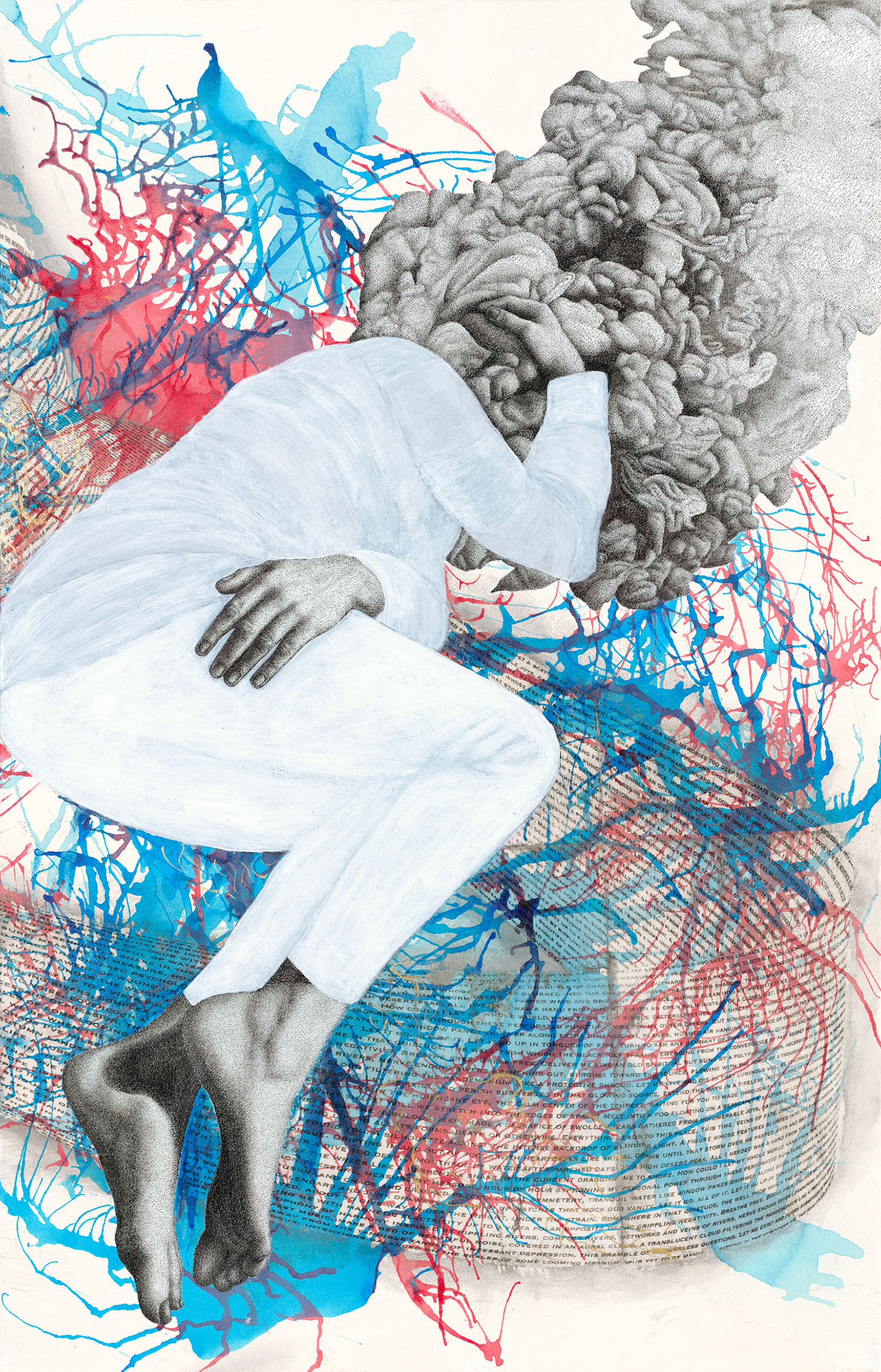