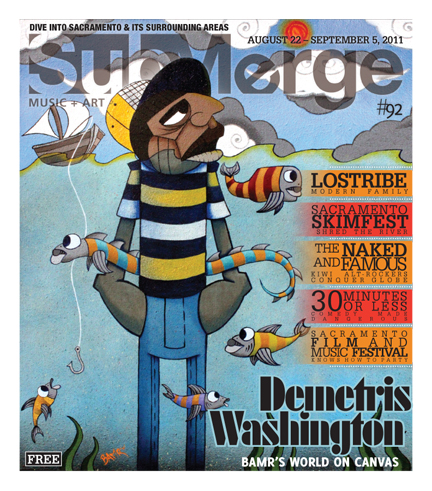 As a toddler, Demetris Washington used to think of the world as his own personal canvas. He started off as would any other child, scribbling on anything and everything he could grasp with his tiny hands. To his mother’s disadvantage he would create pieces of art on the walls, the floor and sometimes even paper. “When I looked at my ultrasound, I was in my mom’s stomach and there was a pencil right next to me. I had a palette and everything,” Washington joked while eating an oatmeal cookie outside of Sugar Plum Vegan Cafe. “When I came out [of the womb] I had a No. 2 pencil. The doctor was like ‘He’s going to be an artist.’”

In elementary school, Washington began to create comics with his own characters that left his family wondering where his imagination would take him next. “I never had fun drawing other characters. I never drew The Hulk, never drew Superman or anything like that,” he said. “I always came up with my own characters. My uncle was always asking, ‘How do you come up with this stuff?’”

While attending high school in Stockton, Calif., the realization that art can become a career started to settle in after he got paid to paint a mural of the school mascot in the boys’ locker room. “I really hyped the team up with that one. Every time they came in [the locker room] I could see their faces lighting up. And I thought, I really like this reaction I’m getting out of them, this is beautiful. People are happy with what I’m doing and I’m getting paid,” Washington said. And while getting his associate degree in graphic design at The Art Institute in Sacramento, he boldly tangled the worlds of comic books and graffiti to form a unique genre of art that he has righteously claimed as BAMR. “Becoming a Man Righteously. For a minute I was really skeptical about this name but when I began to tell people, ‘My name is BAMR,’ they would look at me weird. And that’s the reaction that I wanted, for people to look at me weird but then I tell them what it means,” Washington said. 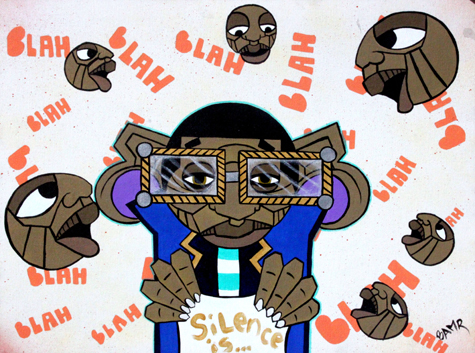 From scribbling on the walls as a toddler to attending art school, Washington has found himself working on projects for the Sacramento Kings, where he would paint on jerseys, shoes and billboards to raise money for charities. Now he has his own show, Building Legacies, at the adorable Legacy Boutique in Midtown. His artwork pops out at you because it is full of colorful characters and shapes that are dying to jump from the canvas and come to life. Although he did not want to draw mainstream cartoon characters as a child, he was inspired by one cartoonist, E. C. Segar, the creator of Popeye.

“If you look at my characters’ arms they look like they ate a little bit of spinach before they went out,” he said with a laugh.

One piece, called Head Above Water (pictured last/used on cover), shows a man with most of his body submerged in water except for his head. The piece represents Washington starting off as an artist who can finally breathe after beginning to make a name for himself and get more freelance work, he said. Most of his vibrant art pieces are based on his life experiences and ideas that he comes up with, normally between the hours of midnight and 5 a.m.

“I do the paintings at night because it seems like that’s when the ideas come to me, when I’m supposed to be asleep, when I’m supposed to be dreaming. It’s like I’m awake but dreaming at the same time,” Washington said. “I don’t need drugs, I got enough in my own mind. That’s another reason why I paint, because I have the hopes that everybody sees what I’m seeing, so I don’t feel crazy… I sit there and I’m literally struggling to stay sane. I’m sitting there painting and all these thoughts and ideas going through my head and nobody to share it with except this canvas.” 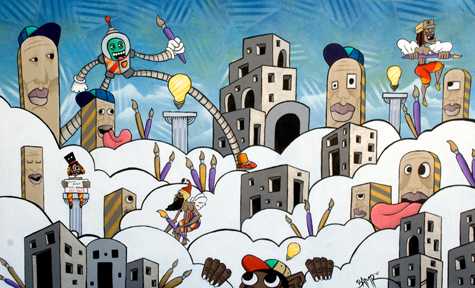 Washington uses his one-car garage as an art studio, which can no longer fit a car in order to store all of the art supplies. But these days he is feeling a bit “too big for the castle” in the small garage and hopes to move to Los Angeles by the beginning of next year and find a bigger studio to work in. After living in so many California cities, such as Monterey, Oakland, Hayward, and Stockton, he doesn’t like to compare the Sacramento art scene with other cities. “I see it as squeezing the last of the toothpaste. Definitely a beautiful place to do art but maybe not as many opportunities for every artist, for every style,” Washington said. “I feel it’s kind of biased. But I’m here, and Sacramento has been good to me, so I’m thankful for it.” Outside of his small Sacramento garage, the 20-year-old freelance artist and graphic designer makes sure to balance his social and work life by finding time to spend with his two young sons.

“They really are the reason why I do everything that I do. I want make an impact on their lives. I wasn’t able to spend so much time with them, because I was working so hard just to make sure they had what they needed,” Washington said. “And I realized what’s more important is the fact that I’m there for them. They get material things but it’s not going to fill in that void where love belongs. So I had to stop for a second, pause and spend more time with them. You can’t become a man righteously if you have two sons that you’re not there for.” But finding time for his family is evident because inside of his sketchbook, which is filled with his own intricate drawings, there are the occasional scribbles from crayons. Washington proudly pointed out the different art techniques that his 2 and 3-year-old sons have created on the pages from coloring with crayons. Demetris encourages his young sons to be creative and let their imagination take over, just like their father’s. “People look at my work and say, ‘Dude how do you come up with this?’ I was going to ask you the same thing. I don’t know how I come up with it. It’s just there.” 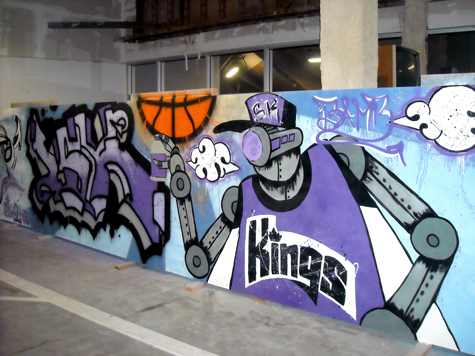 BAMR’s Building Legacies is now showing at Legacy Boutique, 2418 K Street, Sacramento. The exhibit is free and open to the public. For more info, call the boutique at
(916) 706-0481.