Char Hall Earns Fame (and Her Living) Through Her Unmistakable Talent 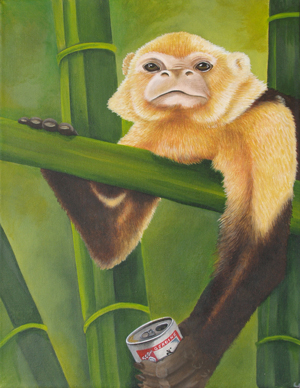 Of everyone, artists seem to be the ones to grasp onto the “work to live” mantra, as opposed to “live to work.” Recession schmrecession, when it gets right down to it, artists create for the sake of creating, and most inherently become a fighting force for their community while they’re at it. But to be able to do both, to be able to create, support your community and simultaneously earn a living from being artistic—well, that is a luxury few are talented enough to afford.

Enter Sacramento native Char Hall. An accomplished artist at an early age, Hall was “raised by the wild plains of her imagination.” Following a self-described “panic attack” after high school that disenchanted her into thinking she needed to be “in the real world and join the job force,” she found herself on a whirlwind path that led her to her spot today, as Sacramento’s premier tattoo artist and one of the capitol’s most sought-after fine artists. Her visual art, and oftentimes her tattoos, hover around broad themes including nature, fauna and flora.

“I love doing flowers,” Hall says, with an affectionate concern that we take flowers like the azalea bush for granted when we walk by, without fully appreciating the extent of their beauty. 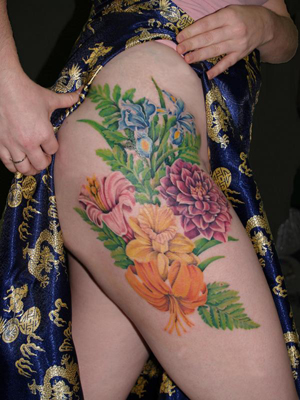 That soft spot for the natural world more than likely stemmed from the books she devoured as a youngster. “I read every single Black Stallion book that was out there,” she says, while also becoming a devotee of “sci-fi and fantasy stuff.” In fact, she counts Jim Henson and Brian Froud as two of her heroes. “My ultimate job would be to do art with those guys,” she says with that kind of gush that can only be applied to fantasizing about working alongside those you’ve idolized. “I would love to do creature creation and make monsters for a living.”

But for now, Hall’s winning bread as Sacramento’s premier tattoo artist—which, she admits with candor, allows her to earn money while still practicing art. Tattooing “pushed me back into art,” she says, creating a continuous cycle wherein these two worlds of tattoo artistry and fine art play against each other. Becoming better at one form guides her into becoming better at the other, she reflects. The two media, however, are “very, very different,” she says. “I paint for myself. I tattoo for others.”

Her shop/gallery, Side Show Studios, co-owned with artist Cy Wylie and located at 5635 Freeport Blvd., Suite 6, in Sacramento, is a meticulous, flash-free spot where local artists stop by on any given day. “You can’t walk in and say, ‘I’ll have a Number 46 with a side of spider webs’ here,” she says.

This week, Hall is in Orlando, Fla. attending the invitation-only “Marked for Life” Female Tattoo Artist Expo. The honor to mingle among key players in the industry is well deserved for this multiple-Best of Sacramento top honors winner. But the almost immediacy of it is not lost on Hall, who half-jokes that her tattoo artist training began four years ago with a good friend giving her “a 30-second rundown on how not to kill someone” and sending her on her journey to learn for herself. Being self-taught has made her “very nervous” to attend; in fact, she won’t even look up fellow attendees before she goes. “It’s crazy to me,” she says. “In my mind, I’m still that same person [before the awards]. There are guys that I aspire to be like; I’m nowhere near that yet. Maybe in 10-15 years I’ll be able to compete with those guys and really be the best of Sacramento.”

Here’s just a quick rundown of the eclectic, incredibly colorful gallery of Char Hall’s tattoo art: A full back tattoo of a sprawling tree with butterflies alighting; fanciful, multi-hued hot air balloons that look as though they’ll float right off the wearer’s skin; a sketch of the Mad Tea Party scene straight from the original Alice’s Adventures in Wonderland, which inspired another piece with the Cheshire Cat for someone else.

“One of my most favorite tattoos in the world,” she says, is one of her own: a beautiful, sprawling, orange octopus that was only supposed to take three hours—until she learned the art was meant to wrap around the owner’s ankles. After assessing the difficulty of keeping the tracing paper in such a precarious place while applying the tattoo, she decided to wing it and draw the octopus freehand. “I had a good time drawing it on,” she says with a proud reflection. But she didn’t stop there. Once the form took shape, the swell of possibilities in applying her studies in color theory took over, and she calmly and confidently convinced her client to let her carry her creation to the end. Ten hours later, Hall had completed her lifelike masterpiece; and no doubt developed a relationship with her customer, as well (she only charged for the three hours she initially thought it would take).

This story of the octopus seems to be a fitting example when explaining the feeling one gets from simply viewing Hall’s fine art or tattoo galleries, or even the shop’s MySpace page. There’s a feeling of mindful concern and compassion that stems from the human-like faces and mannerisms on her sketched animals (“if you make them human, it’s harder to kill them,” she says), to the “who I’d like to meet” section on Side Show’s MySpace bio (“people who believe in being active and supportive of their communities”), to the subject matter she chose for her three prints showcased in the fourth annual Aves: A Celebration of Birds art show. 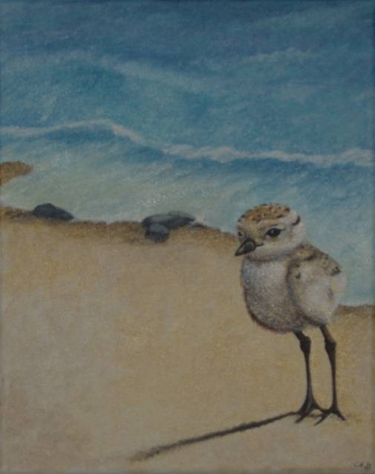 Those three prints are an homage to the endangered Snowy Plover, a sparrow-like shorebird that she loves to watch “skip around on the sand” when she visits her favorite beach in Santa Cruz. The show coincided with National Bird Day and benefited Born Free USA and the Animal Protection Institute.

“Everything we do in life affects someone,” she coolly asserts, when asked about this mindfulness that exudes from her, her work and her environment. When someone walks into the shop, “I could take their money and kick them in the pants,” she muses. But for Hall, there’s no reason to get worked up about the little annoyances in life. And why would she? “I have the best job in the world,” she says. “I get to draw on people all day.” 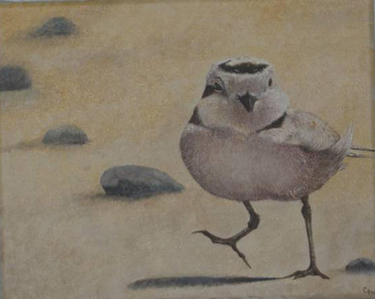