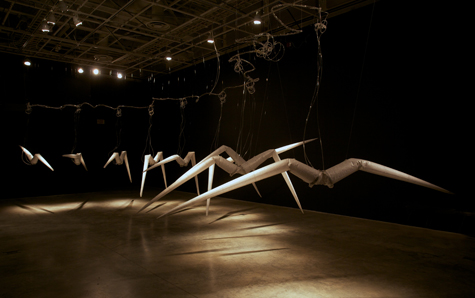 Rambling somewhere around the axis of where sculpture, engineering, robotics and puppetry collide lays the malleable artworks of Brooklyn-based visionary Chico MacMurtrie. For the past 20 years, MacMurtrie’s anthropomorphic mechanisms have taken on many forms, stimulating commentary on the meaning of movement, of life and of the ways in which viewers are allowed to interact with art, while at the same time examining how art interacts with the world at large.

For reference, take MacMurtrie’s large-scale installation, Birds–showing at the Richard L. Nelson Gallery at the UC Davis campus through Dec. 11, 2011Birds brings together a fleet of elegant bird-like creations, hung in a procession above snaking floor lights meant to represent a river. The installation utilizes some complicated mechanics, computers, a revolutionary inflatable architecture technology created by MacMurtrie himself, and very subtle robotics to produce an interactive demonstration. The inflatable technology, made of a light fabric, essentially allows the avian forms, though loaded with mechanical actuators and machines for movement, to approximate seamless, non-rigid organisms. The “bird” sculptures react to environmental sensors–triggered by the people in the room–by coming to life from a deflated form, to begin beating their wing-like appendages as if flying. Portraying qualities consistent with actual living systems, should a viewer get too close to the sculptures, or spend too much time ogling, they begin to devolve, or die, eventually crumbling back into their stasis one by one. 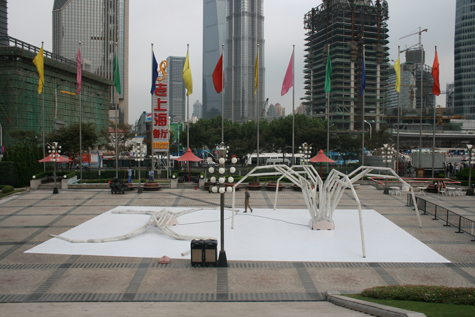 To give an accurate synopsis of MacMurtrie’s robotic sculpture work is nearly impossible, given that the more tangible elements of contemporary art remain satisfyingly absent in his work. Instead, MacMurtrie’s muse is derived from the examination of amorphic shape shifting, using robotics to bring to life geometrically abstract creations–most of them very big–to titillate viewers, and to bring a sense of symbiosis to the art-viewing ritual.

MacMurtrie’s sense of reinvention began during his undergrad college days at the University of Arizona. As a painter, MacMurtrie, 50, says he felt confined by the starkness of the canvas.

“My paintings got more physical, and ultimately I began literally throwing my body into my paintings, using my body as a brush,” explains MacMurtrie. “Ultimately, what I was after was the resulting effect of the paint on my body.”

When the paint had dried on him, the result left a kind of skin. MacMurtrie had an epiphany to move away from painting toward creating transformational performance pieces utilizing body skins. It wasn’t until he took the skins off that the seeds of what MacMurtrie now grows would be sown. 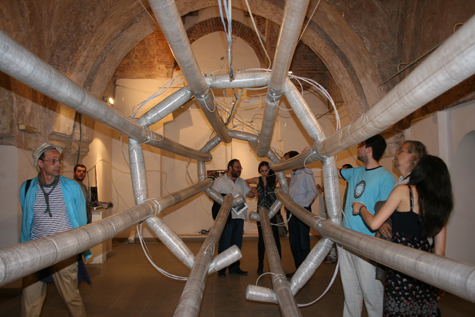 “Once I emerged out of the skins, I noticed that the skins had a life of their own that was even more interesting and more powerful, in my opinion,” says MacMurtrie. “I began to figure out how to put sub-structures into these skins to animate them.”

MacMurtrie taught himself robotics, and began to see the world in mechanical systems. His new muse was to break down movements mechanically, while utilizing his background in sculpture to form a hybrid of the two. This process began with MacMurtrie’s creation of interactive robotic humanoids in the early ‘90s, collaborating with computer engineers and programmers, and has moved into his innovative work with inflatable robotic architecture. In order for him to progress, MacMurtrie literally had to reinvent the way the processes of construction and implementation were approached for his work–to move beyond robotic automation, and into abstract robotic sculpture.

Simply put, he’s not an engineer. But that doesn’t bother him.

“If I would have gone to engineering school, it would have inhibited [me],” says MacMurtrie. “Often, I’m doing things that are extremely difficult and challenging. People who have a practical understanding of engineering wouldn’t take those things on. I end up creating more work for myself because I’m not an engineer, but it’s more of a genuine process, I think.”

With lots of funding help, due in no small part to five grants from the National Endowment for the Arts, as well as funding from national, local and international granting agencies and 30 corporate sponsors, MacMurtrie and his collaborative group of artists, technicians and programmers–Amorphic Robot Works, founded in 1991–have created more than 250 mechanical sculptures that assume anthropomorphic and abstract forms that have been shown all over the world. 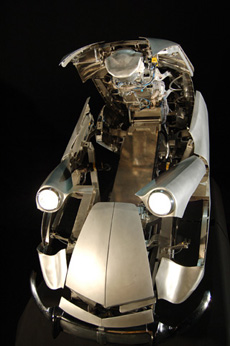 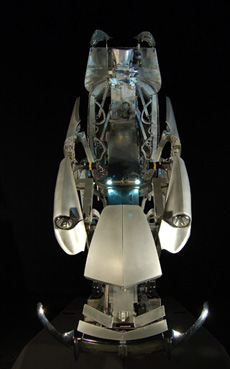 Big examples of this work include Totemobile–a robotic sculpture that in its settled form appears as a life-sized representation of a 1965 CitroÃ«n DS automobile. During the performance process, the sculpture is disassembled robotically, growing slowly from the inside out to finally bloom into an organic 60-foot-tall totem pole. The result–which utilizes the inflatable technology–is a stunning pseudo-Transformers study of pop culture idolization and the inner-workings of organic labor that any construct of man was forced to endure.

With Birds, MacMurtrie tried to create an in-between point from Totemobile, and his early humanoid robots.

“[The birds] could be legs, they could be cones. They are certainly abstractions of birds,” explains MacMurtrie. “People see them as birds because they appear to have wings, and they appear to live and die, and they appear to take flight. They also have a pattern of becoming unified, then falling out of order. It resembles nature. It’s not so important that they are literally birds to me, as much as [viewers] get a sense of: they’re organizing the way nature organizes. They fall apart the same way that nature tends to fall apart.”

MacMurtrie says that the birds have received different reactions the world over. And while the abstractness of his work is true in a geometric sense, his hope is that it inspires people to think beyond the mechanics of his creations.

“The most important thing is that it’s alive, it has a life force, it’s trying to organize itself and trying to find its structure,” says MacMurtrie. “There’s a lot of social commentary [in Birds], but it’s extremely subtle. The birds work pretty much the same way we do. The difference is they’re fueled by air, and if we can’t breathe, we don’t live, and if we don’t eat fuel, we certainly don’t live. In this case, their air is fueled by electricity. It’s similar or parallel to our living.”

Birds shows at the Richard L. Nelson Gallery at Nelson Hall at UC Davis through December 11, 2011. Gallery hours are Monday through Thursday, Saturday and Sunday 11:00 a.m.—5:00 p.m. and by appointment Fridays. Call (530) 752-8500 for more information. For more about Chico MacMurtrie, visit Amorphicrobotworks.org.